Wholesale inflation in the US soared 11 percent in April from a year earlier, a hefty gain that indicates high inflation will continue drag down consumers and businesses in the months ahead.

The Labor Department said Thursday that its producer price index - which measures inflation before it reaches consumers - climbed 0.5 percent in April from March. That is a slowdown from the previous month, however, when it jumped 1.6 percent.

The 11 percent year-over-year increase in April is a slight decline from the 11.5 percent annual gain in March, which was the biggest increase since records began in 2010.

Still, the April figure represents a painfully high increase, and stock index futures traded down on Wednesday as inflation fears continued to weigh on Wall Street. 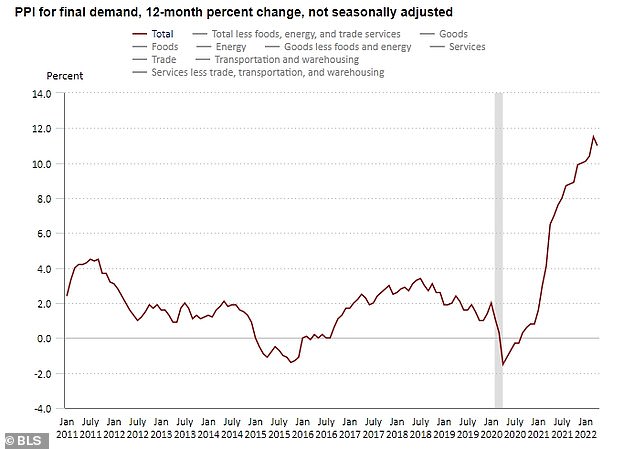 Thursday's report showed a broad-based rise in the cost of food at the wholesale level, with grains up 41.3 percent from a year ago as Russia's war in Ukraine raises world prices. Both Russia and Ukraine are major grain producers.

The cost of eggs skyrocketed 161.3 percent, driven up by a bird flu outbreak that has killed 10 percent of chickens in the US. Processed young chickens were up 24.1 percent from a year ago.

Fresh vegetables were up 45.7 percent and fresh fruit rose 17.3 percent. 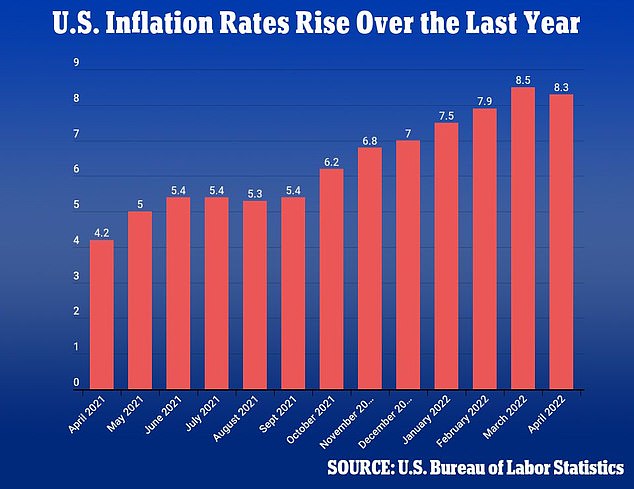 Consumer price data for April showed that inflation leapt 8.3% last month from a year ago.

Prices for airline tickets jumped by the most on records dating to 1963. And food prices continued to rise sharply.

Over the past year, grocery prices have shot up 10.8 percent, the largest such year-over-year increase since 1980. Food away from home was up 7.2 percent from a year ago.

The cost of a gallon of gas fell 6.1 percent in April but is still up nearly 44 percent from a year ago.

And so far in May, prices at the gas pump have shot back up. Nationally, the average for a gallon of gas was at a record high of $4.40 on Wednesday, according to AAA.

The high price of oil is the main factor. A barrel of U.S. benchmark crude sold for around $100 a barrel Tuesday. Gas had fallen to about $4.10 a gallon in April, after reaching its prior record high of $4.32 in March.

President Joe Biden in a statement touted the dip in the annual 'headline' inflation number -- which seems to be dropping mostly because prices began soaring a year ago, making the basis for comparison higher. 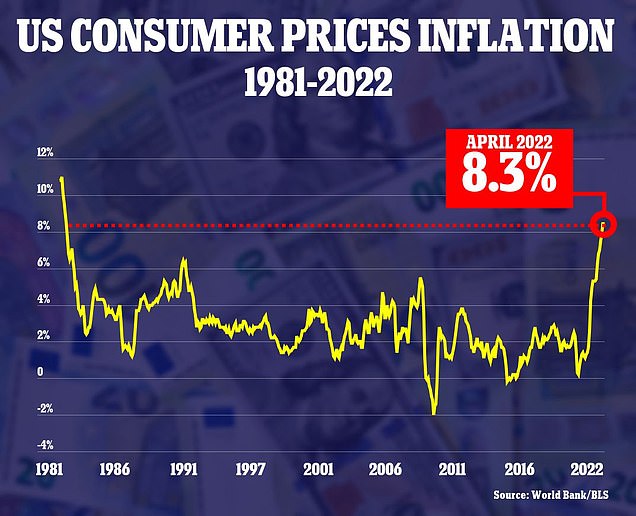 Inflation in the US has fallen slightly from the four-decade high it reached in March.

'While it is heartening to see that annual inflation moderated in April, the fact remains that inflation is unacceptably high,' said Biden. 'As I said yesterday, inflation is a challenge for families across the country and bringing it down is my top economic priority.'

Biden blamed chronic supply chain snarls related to the swift economic rebound from the pandemic, as well as Russia's invasion of Ukraine, for igniting inflation.

He said his administration will help ease price increases by shrinking the government's budget deficit and by fostering competition in industries, like meatpacking, that are dominated by a few industry giants.

'Inflation is out of control with another gas price record hit today, yet Biden continues to lie to Americans and refuses to take responsibility for his failed agenda,' said Republican National Committee Chairwoman Ronna McDaniel in a statement responding to the latest report.

'Biden and Democrats' reckless spending created the highest inflation in 40 years, and Americans are paying the price,' she added. 'Skyrocketing prices, Biden's gas hike, and the deteriorating economy are on the ballot in November, and voters know Biden and Democrats are to blame.'