Millions of people are without power in Texas after wind turbines froze amid Winter Storm Uri, which has sent temperatures plunging across the southern Plains a day after conditions canceled flights and impacted traffic across large swaths of the US.

According to poweroutage.us, 2.7 million people are still without power in Texas as of Monday afternoon. Another 103,000 lost power in Louisiana and more than 51,000 people were reporting outages in Mississippi.

In Dallas, officials told residents to refrain from calling 911 to report power outages as the 911 call center became overwhelmed with power outage calls.

'This impressive onslaught of wicked wintry weather across much of the Lower 48 (states) is due to the combination of strong Arctic high pressure supplying sub-freezing temperatures and an active storm track escorting waves of precipitation,' the NWS added.

Besides Texas, weather-related emergencies have also been declared in Alabama, Oregon, Oklahoma, Kansas, Kentucky and Mississippi. The NWS said record low temperatures were expected in much of the country.

'Hundreds of daily low maximum and minimum temperatures have been/will be broken during this prolonged 'polar plunge,' with some February and even all-time low temperature records in jeopardy,' the NWS said.

In a large area known as the Southern Plains that spans parts of Texas, Oklahoma and Kansas, temperatures are expected to fall well below typical readings for the time of year.

A major winter storm will develop over the southern Plains today lifting into the Northeast through Tuesday with a large area of snow and ice. There will be significant travel disruptions and a concern for power outages as winter weather headlines extend from Texas into Maine. pic.twitter.com/Iqo9G7DJex

In Texas, rotating power outages were initiated by the Electric Reliability Council of Texas (ERCOT) early Monday morning, meaning hundreds of thousands went without electricity for short periods as temperatures fell into the teens near Dallas and 20s around Houston.

'We urge Texans to put safety first,' ERCOT tweeted as it urged residents to reduce electricity use. The council manages the flow of electric power in the state. 'Traffic lights and other infrastructure may be temporarily without power,' the council said.

The council described the rotating outages as a 'last resort to preserve the reliability of the electric system as a whole,' adding that utility transmission companies are tasked with determining how to reduce demand on the system.

'Every grid operator and every electric company is fighting to restore power right now,' ERCOT President and CEO Bill Magness said in a statement.

Around 5,000 Oklahoma Gas & Electric customers were without power overnight, and Entergy Arkansas logged about 3,000 outages. Both states have much smaller populations compared with Texas.

Officials in Houston had warned people to prepare for outages and hazardous roads - conditions similar to what residents might see in the wake of a Category 5 hurricane.

'There (have) been numerous reports of accidents from icing recently,' National Weather Service (NWS) lead forecaster Bob Oravec said Monday. 'I think there's going to be a big threat today as the system pushes northeastward.'

Houston has opened up more warming facilities for its city's homeless population. The city opened up one facility at the GRB Convention Center Sunday afternoon and now have more than 450 homeless sheltering there.

Officials said Monday that they still have the capacity for an additional 100 people. Each person entering the facility is being screened for COVID-19.

By midmorning, 3,000 flights had been canceled across the country, about 1,600 of them at Dallas/Fort Worth International and Bush Intercontinental airports in Texas.

At DFW, the temperature was 4F, about 3 degrees colder than Moscow. Accumulating ice between a tenth and a quarter of an inch was possible across eastern Louisiana, Mississippi, central Tennessee, Kentucky and over into the West Virginia and Ohio border region, Oravec said.

Officials said Bush Intercontinental Airport runways will remain closed until at least 1pm on Tuesday, as the region remains under the grip of subfreezing temperatures.

Up to 12 inches of snow was expected across parts of the southern Plains into Monday, said Marc Chenard, a meteorologist with the National Weather Service's Weather Prediction Center.

Authorities in parts of the state are urging motorists to stay home as a major winter storm makes road conditions treacherous. https://t.co/rtddQhJ70Z pic.twitter.com/JiTEIWrblo

The storm has resulted in state of Texas experiencing some of its coldest temperatures in more than 30 years, with some areas breaking records that are more than a century old.

The region had been gearing up for the winter weather for the better part of the weekend.

President Joe Biden also declared an emergency in Texas in a statement Sunday night. The declaration is intended to add federal aid to state and local response efforts.

The NWS said Sunday that the forecast through early Tuesday calls for 8 to 12 inches of snow in central Oklahoma, and 4 to 8 inches in an area extending from eastern Texas to the Ohio Valley in the Northeast.

Nebraska saw a number of low-temperature records broken as Arctic air sits over the Plains.

Even with the record-breaking temperatures, none fell as low as Valentine in north-central Nebraska, which saw the mercury dip to minus 33.

Several people were injured in Oklahoma following a horrific pile-up involving multiple vehicles on a snow-covered highway during the storm.

The Oklahoma Highway Patrol said the incident occurred westbound on the Turner Turnpike, in Oklahoma City, near mile marker 141 at around 3pm on Sunday when two semi-trucks collided.

Two of the semis involved in the wreck burst into flames shortly after, and multiple people were rushed to local hospitals for treatment.

Elsewhere in the state, a male motorist was killed around 1.30pm local time near Braham after losing control of their vehicle and crashing into a semi truck.

According to OHP, the driver, later identified as 24-year-old Chevin Webb of Kansas, left the road, hit a bridge railing and continued to spin before coming to a rest on the road. 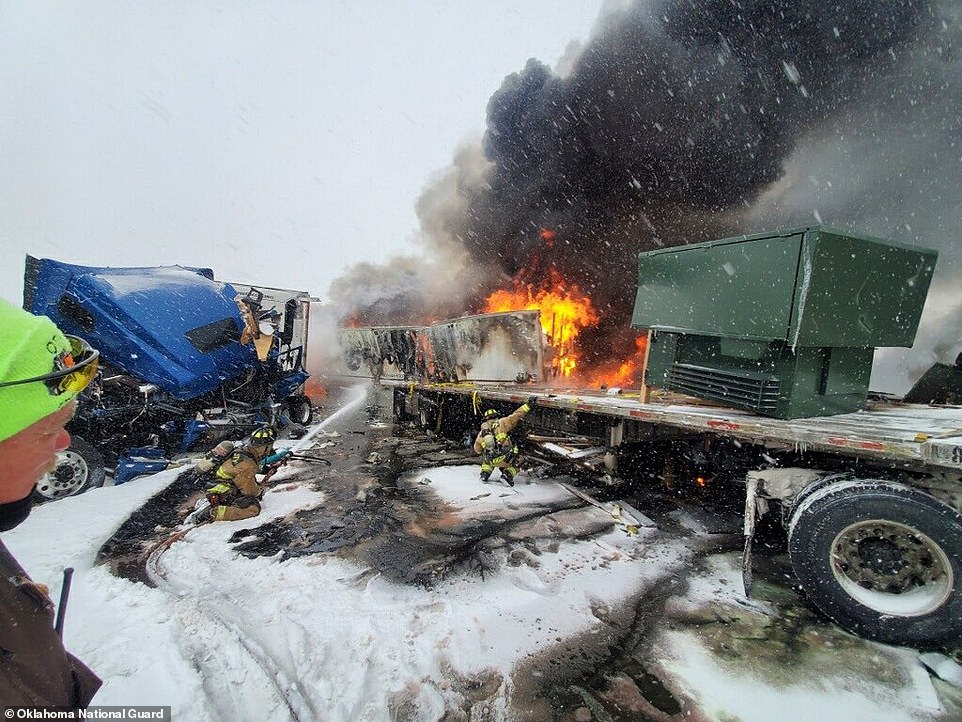 OKLAHOMA: Several people were injured in Oklahoma following a horrific pile-up involving multiple vehicles on a snow-covered highway during the storm 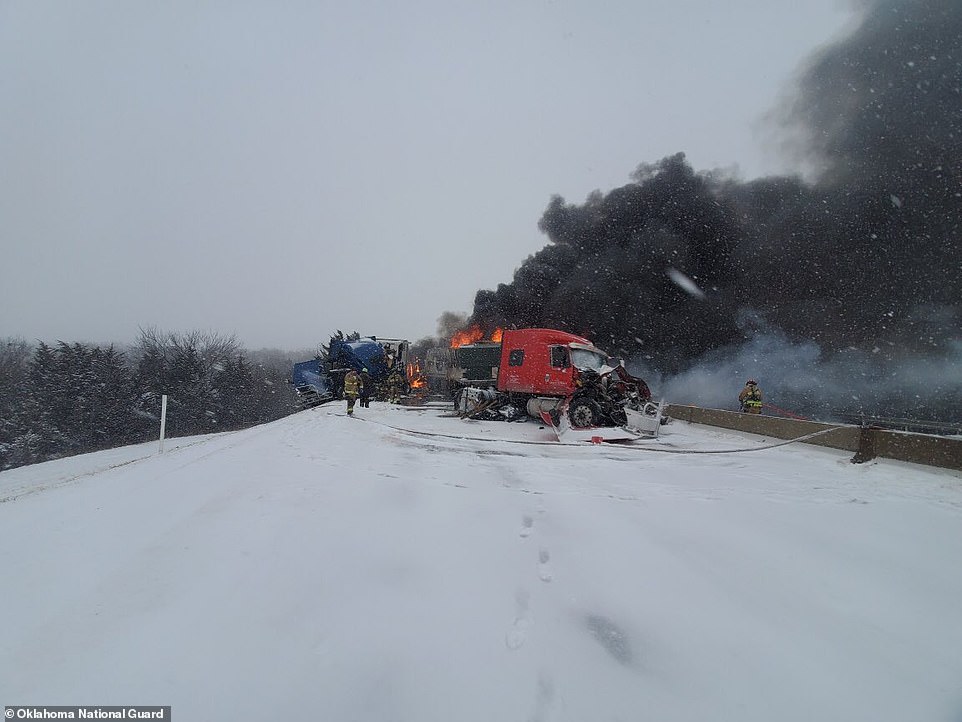 OKLAHOMA: First responders seen at the scene during the pile up over the weekend. Traffic had to be diverted from the area, authorities said

The NWS said several cities are experiencing record lows amid a winter storm that's dropping snow and ice in a huge swath of the US.

The weather station in Hibbing/Chisholm, Minnesota, saw a record low of minus 38 degrees, while Sioux Falls, South Dakota, hit minus 26 degrees.

La Crosse, Wisconsin, reached a record low of minus 19.

In Dallas, the low could drop to just 1 degree Monday. The weather has prompted a power emergency in Texas, where rotating power outages were initiated by the Electric Reliability Council of Texas.

The nation's largest oil refinery shut down because of the winter weather hitting Texas on Monday. Motiva said it shut down the Port Arthur, Texas, refinery due to'unprecedented' freezing conditions along the Gulf Coast.

The company said it was monitoring the weather and would resume operations 'as soon as it is safe to do so'.

In Louisiana, police closed multiple bridges and parts of some interstates because of icy conditions around Baton Rouge.

Notably, Interstate 10 between Baton Rouge and Lafayette was closed in both directions Monday morning because of ice accumulation that caused multiple crashes

Louisiana State Police said they have investigated nearly 75 weather-related crashes caused by a mixture of snow, sleet and freezing rain in the past 24 hours, according to a Facebook post.

As weather conditions deteriorate across the state and temperatures remain at or below freezing, ice is accumulating on the roadways and troopers urged drivers to stay off the roads.

The state Department of Transportation said on Facebook that all state-maintained roads in East Baton Rouge Parish 'have been deemed unsafe due to the ever changing winter weather conditions'. Drivers on westbound Interstate 10 were being diverted onto other roads.

In Memphis, Tennessee, snow started falling Sunday afternoon, and in Mississippi, sleet in Jackson and other central parts of the state left roads and bridges slick.

The Mississippi Department of Transportation  posted photos and video of snowy interstates on Facebook and urged people to stay home so crews can work to clear the roads.

A video of a truck sliding down a road in Tennessee was making it rounds on social media Monday morning.

In the footage, the driver of the truck had just pulled out of their driveway when the truck began to slide sideways down the hill.

Parts of Kentucky and West Virginia still recovering from an ice storm last week were expected to get up to a quarter-inch of ice by Tuesday.

Kentucky officials urged people to stay off the roads after one round of wintry weather hit the state and another was forecast to start Monday afternoon.

'We already have some accidents on our roadways,' Gov Andy Beshear said during a morning news conference. 'It is slick and it is dangerous.'

KENTUCKY:
*PLEASE RETWEET*
We are asking ALL Kentuckians to refrain from traveling. Please stay home and allow emergency responders to do their work during this winter storm.
Your life matters. Why risk it on the roads? pic.twitter.com/8bIXf6bqR6

Up to 9 inches of snow is forecast for central parts of the state and officials said the eastern part of the state could see about a half-inch of ice accumulation.

Chicago is also currently locked in a deep freeze, with the city told the brace for at least a foot of snow - possibly more - by Monday.

Monday will bring about 7 to 15 inches at Midway Airport, the weather service said. More snow likely will follow Tuesday, with a foot expected at O'Hare Airport.

Temperatures aren't expected to climb above freezing until next Sunday, prompting the city to keep open its warming centers.

Police stations also are available as warming centers. The NWS says the high was expected to reach 12 degrees.

Kansas Gov Laura Kelly has declared a state of disaster as frigid temperatures and life-threatening wind chills grip the state.

Wind chills dropped as low as minus 30 in some areas overnight Sunday and temperatures will struggle to be above zero, adding to nearly a week of extremely low temperatures in much of the state, the NWS said.

The low temperatures put stress on utility and natural gas providers, which were asking customers to conserve energy during the cold snap.

The emergency declaration allows of state resources and personnel to be used to help with response or recovery operations under certain circumstances.

Meanwhile, in the Pacific Northwest, tens of thousands of people were without power after a winter storm blanketed the region with ice and snow and made travel treacherous.

Seattle experienced its snowiest weekend in decades, following 11.1 inches of snowfall in the region between Friday and Saturday - the highest two-day total its seen in nearly 50 years.

This article details how a family kept their house no lower than 46 degrees for 4 days. It may also give you some ideas of how to manage. Above is what we do when our oil runs out or we get hit with a wicked bad storm. Hope it helps! https://t.co/8HzdU1P7YH