The massive storm system will affect millions of people starting Wednesday with the dangerous threat of snow, rain, damaging winds, and plummeting temperatures. 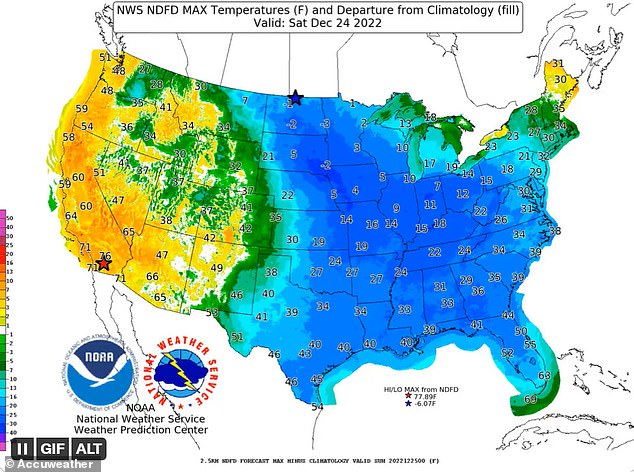 CHRISTMAS EVE TEMPS: A massive storm is set to bring an arctic blast that will affect millions of people across the US with dangerous threat of snow, damaging winds, and plummeting temperatures.

The storm is expected to start Wednesday, with the most impact expected from Thursday through Christmas Eve, with treacherous conditions threatening to snarl holiday travel.

Blizzard conditions are expected in parts of the Midwest and Great Lakes while Mississippi may get blasted by the coldest air the state has seen in at least five years, Fox Weather reported.

The arctic front is predicted to march across the eastern two-thirds of the country in the days before Christmas, potentially bringing 'the coldest air of the season,' according to the latest forecasts from the federal Weather Prediction Center.

A frigid Arctic airmass will plunge southward throughout this week, bringing dangerously cold temps & wind chills across the Central & Eastern U.S. As you finish your holiday shopping, take action to protect yourself from the cold. Cold weather safety: https://t.co/cDajZfk6D6 pic.twitter.com/xl8daxPH16

The incoming arctic front brings 'extreme and prolonged freezing conditions for southern Mississippi and southeast Louisiana,' according to the National Weather Service.

'The Arctic air can envelop much of the central and eastern part of the country just prior to the holiday weekend, threatening the coldest pre-Christmas stretch in decades,' AccuWeather Meteorologist Elizabeth Danco said.

By Thursday night, forecasters predict temperatures will plunge as low as 13 degrees in Jackson, Mississippi, while Nashville may see temperatures drop to around 5 degrees.

Temperatures in the Northern Rockies, central and northern Plains and the Upper Midwest are expected to hit subzero.

The center warned of a 'massive expanse of frigid temperatures from the Northern Rockies/Northern Plains to the Midwest through the middle of the week, and then reaching the Gulf Coast and much of the Eastern U.S. by Friday and into the weekend.'

'The area that got hit hard with blizzard conditions will now have to contend with another outbreak of intense cold,' AccuWeather Meteorologist Matt Benz said.

Temperatures could dip as low as 30-40 degrees below zero in some areas of Montana or North Dakota, which would come close to a stretch of extreme cold observed back in 1983 and 1989, AccuWeather reported.

'The cold burst in places such as Minneapolis, Chicago and Des Moines will be more typical of January or February, as opposed to December,' Benz said, adding that the prolonged nature of the Arctic air would also be noteworthy.

A massive winter storm is expected to snarl Christmas week travel as heavy snow, rain and damaging winds sweep across the U.S. @BrittaMerwinWX has the latest on the forecast: https://t.co/wu6G4tg85Z pic.twitter.com/WGrwQD7lap

The coldest temperatures are expected on Thursday and Friday and AccuWeather experts say it will be 'downright dangerous for individuals who do not have enough warm layers or proper shelter to be outside for even a short amount of time.'

And in New York, while parts of upstate New York will have a white Christmas, it's still too early to determine how the storm will impact the Big Apple and whether the city will see any snow at all.

Rain is expected to fall in several areas within the I-95 corridor, as early as Thursday afternoon. The region includes some of the Northeast's biggest cities, including Philadelphia, New York, and Washington, D.C.

Cloudy weather is then set to kick into the Big Apple on Saturday, which is Christmas Eve. Christmas Day, on Sunday, is supposed to be sunny with temperatures expected to reach high 20s, according to Fox Weather.

The last time it snowed in New York City on Christmas Day was in 2009, according to The New York Post. There had been two inches of snow reported in Central Park by 7 a.m. that year, although it is believed that the city did not experience any snowfall throughout the day.

Other parts of New York, including Buffalo and Syracuse, are anticipating even more snowfall as soon as Friday until the end of the weekend.

The frigid conditions will spread throughout the US and down into the south, with cities including Atlanta, Dallas and Nashville at low temperatures in the teens and even single digits.

Again, the coldest temperatures across the Southeast are expected on Friday and Saturday with highs in the 20s inland and in the 30s along much of the Gulf coast, with gusty winds creating more of a chill.

'There is the likelihood of hard freezes along the Interstate 20 and 10 corridors,' Deger said.

He added that preventative measures should be taken by those heading away from home for the holidays to prevent frozen pipes and water damage.

In Atlanta, forecasters say low temperatures on Friday night will be around 13 degrees with the high temperature Saturday still below the freezing mark at around 29 degrees, the Weather Service projects.

And while Florida will not have a white Christmas, forecasters are expecting that weekend to be unusually cold throughout the state.

Northern Florida cities such as Jacksonville, Tallahassee and Pensacola have predicted lows in the 20s on Christmas Eve, with highs of about 40.