'It's like a Soviet store during 1981': Grocery stores across the US have empty shelves as supply chain crisis and COVID combine to make basics like milk, bread, meat, canned soups and cleaning products hard to find

Shoppers across the U.S. are confronting alarming shortages of basic foodstuffs, as a variety of factors exacerbate supply chain issues from coast to coast. 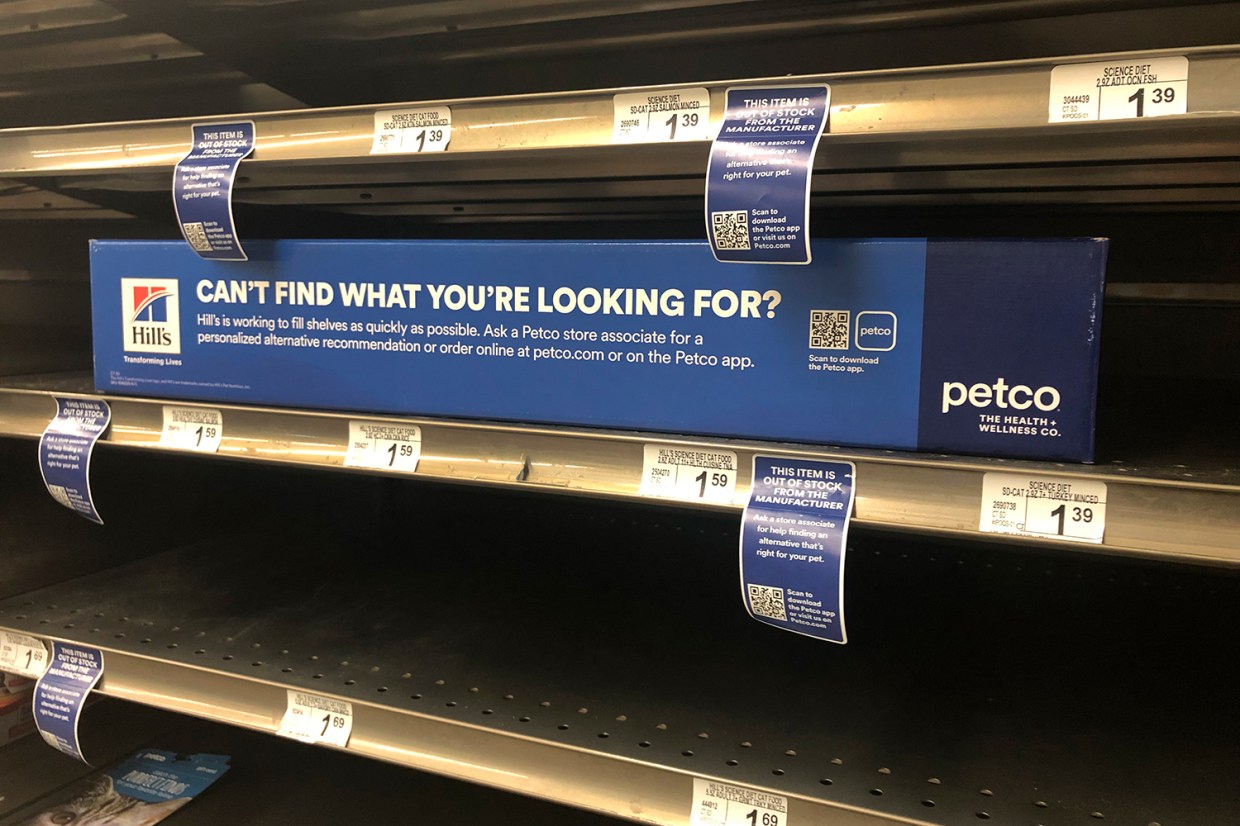 Shoppers across the U.S. are confronting alarming shortages of basic foodstuffs, as a variety of factors exacerbate supply chain issues from coast to coast.

Severe winter storms have disrupted shipping in parts of the country over the past week, and surging cases of Omicron are driving millions of absences from work, disrupting basic functions such as shipping, unloading and stocking.

On Monday, the U.S. confirmed a world record 1.46 million new cases of COVID-19, and one economic expert has predicted that five million people, or 3 percent of the national workforce, will have to call in sick this week as the virus spreads.

The United States reached a new record for number of Americans hospitalized with COVID, with more than 146,000 people currently admitted with the virus - a number higher than the 132,051 record set in January last year.

Yet the knock-on effect has been intense across industries.

From Washington, D.C., to Anchorage, Alaska, shoppers are finding uncomfortable shortages as a result and demanding to know when the supply chain issues will ease.

The misery has been compounded by inflation.

Consumer prices rose by 6.8 percent in November from the year before, the fastest pace in 39 years. The December inflation report, due out on Wednesday, is expected to show price gains accelerated further last month.

After almost a year in office, the only thing Joe Biden has delivered on are empty shelves and empty promises. pic.twitter.com/KZxm045Z6D

Grocer Albertsons, which owns Safeway, Vons and Jewel-Osco, said on Tuesday the Omicron variant had put a dent on the recovery of its supply chain, and expects the issues to linger for a longer duration.

Sankaran also said Albertsons had to deal with several product categories being out of stock for a few months.

Even so, he added, Omicron has put 'a bit of a dent' on efforts to improve supply chain gaps. 'We would expect more supply challenges over the next four to six weeks,' Sankaran said.

Analysts and corporate America had previously estimated supply-chain snafus to ease halfway through the year, but a full recovery could now be delayed because of Omicron-related issues, including labor shortages.

'For 2022, we expect supply pressures to likely linger for longer, perhaps until the second half of next year before gradually unwinding,' Deutsche Bank analysts wrote in a note on Tuesday.

'While there is plenty of food in the supply chain, we anticipate consumers will continue to experience sporadic disruptions in certain product categories as we have seen over the past year and half due to the continued supply and labor challenges,' said Greg Ferrara, the group's president and CEO.

'It's like a Soviet store during 1981. It's horrible,' one man at a Washington DC grocery store told Fox News.

'As long as the pandemic persists, as long as we are making up for decades of past disinvestment, we are going to see impacts on shipping times and shipping cost,' Buttigieg said, during a press conference at the Port of Long Beach in California - the second busiest container port in the U.S. and the scene of a significant backlog of goods and vessels earlier this year.

'When there is an issue effecting ports here, you will feel it as far away as my Indiana hometown,' said Buttigieg, the former mayor of South Bend, Indiana.

In October, Biden announced the Port of L.A. would begin operating 24/7 - a move that had already been made at the Port of Long Beach. At the time, there were about 70 ships waiting to get into one of the ports.

While Buttigieg praised the operations at ports over the holiday season, he noted that goods have to keep flowing to address the ongoing pandemic.

'Not only is this about the presents under the tree, this is about essential goods like medical goods that are needed in this moment of continued public health challenge,' he said.

The port is considering implementing fines for containers which are left sitting on the docks, in a bid to speed up the transport of goods.

I thought I was gonna but groceries. #BareShelvesBiden
Walmart in Greensboro, NC pic.twitter.com/2y4vuJ8mGe

'Omicron is taking its toll at different levels of the supply chain,' he said.

Catsimatidis said that though Gristedes has multiple suppliers, everyone is feeling the impact of the rise in sickouts, and retailers are driving up the prices of beef, eggs and chicken in order to keep product on the shelves for more consumers.

'If they normally sell 10 million pounds of chicken, they figure if they raise the price 10, 20 cents, some people will buy less chicken and the people that really want to buy the chicken, the chicken will be there for them to buy,' he explained.

Though, he warned that as supply continues to be squeezed, some products may take longer to get to supermarket shelves.

Catsimatidis also said the rising cost of oil is also having a dramatic impact on the price of food and called on the Biden administration to seek out ways to cut the price of gas.

Never thought I would have to live through this again. This reminds me so much of when I lived in Venezuela. Guys, you really don’t want Socialism in America. Listen to those who have gone through it. #BareShelvesBiden pic.twitter.com/qcdgxD8rye

Larry, another D.C. shopper, told Fox: 'Whatever it is, I know they need to hurry up and get this straightened out because people will be starving. It's going to get rough if it keeps on continuing like that.'

Zenatta, another shopper, said that she had been to several stores in the DC area, and shelves were bare everywhere.

'A lot of the stores have been down like this,' she said.

'I think that we're about to have a food shortage, everything's pretty empty.'

Another woman, Megan, told the site that her friend warned her not to shop at a local Trader Joe's.

'I also had a friend who came before me and said, don't even bother coming in. They don't have any trucks. Nobody's been able to get what they need,' Megan said.

Phil Lempert, an industry analyst and editor of SuperMarketGuru.com, told CNN that it was a perfect storm of factors.

'From farms to food makers to grocery stores, it's across the board,' said Lempert.

'During the pandemic, these operations have had to implement social distancing protocols and they're not really built for that and it has impacted production.'

He said that a shortage of truck drivers was compounding the problem.

'The trucking industry has an aging workforce on top of a shortage.

'It's really been a problem for the last several years.'

Severe weather in recent weeks has contributed to the issue, Lempert said - but some of the climatic issues were not short term.

'Fires and droughts are damaging crops such as wheat, corn and soybean in the US and coffee crops in Brazil,' he said. 'We can't ignore it.'

And he added that the pandemic had made people more used to cooking at home.

'We don't want to keep eating the same thing and are trying to vary home cooking. As we do that, we're buying even more food products,' he said.

Recent photo of the pet section of the Dollar General in my small SE Kentucky town. #BareShelvesBiden pic.twitter.com/KJlvYuM7rz