At least 70 are killed by EIGHTEEN tornadoes in Kentucky's deadliest storm in 130 years: More than 100 deaths expected across six states as twisters level entire towns

At least 70 people are thought to have been killed in Kentucky, and there are multiple fatalities at an Amazon distribution center in Illinois, after at least 18 tornadoes ripped across the South and Midwest of the US on Friday night.

Kentucky Governor Andy Beshear said at a briefing midday on Saturday the death toll was now 'north of 70' and that 'it may in fact end up exceeding 100 before the day is done.'

'This will be, I believe, the deadliest tornado system to ever run through Kentucky,' he added. 'It is indescribable. The level of devastation is unlike anything I have ever seen.'

The early casualty estimates suggest that the tragedy is the deadliest tornado strike in Kentucky in more than a century, on a scale last seen in 1890 when twisters killed 76 in the Louisville area.

One tornado among the dozens that struck is estimated to have a damage path of more than 200 miles, which would approach or exceed the all-time global record.

The epicenter of the destruction was the town of Mayfield, a small city of about 10,000 people in the far western part of Kentucky, where the Bluegrass State borders Illinois, Missouri and Arkansas. Entire blocks were flattened, with the courthouse tower shredded, houses and buildings ripped apart, and twisted metal, shattered tree limbs and bricks scattered across streets.

The roof of a candle factory collapsed in Mayfield, resulting in 'mass casualties' according to Beshear. He said 110 people were working in the factory, and that only 40 had been rescued alive from the rubble as of midday Saturday.

'We're going to lose a lot of lives at that facility. I pray that there will be another rescue, another one or two, but it's a very dire situation at this point,' said the visibly emotional governor.

Elsewhere, in southern Illinois, authorities said at least two were dead and up to 50 people were trapped after a roof collapsed at an Amazon warehouse near St. Louis late on Friday, when tornadoes and strong storms blew through the area.

At least two were killed and five were injured when a tornado shredded the roof of a nursing home in Monette in northern Arkansas and another person killed in Missouri.

A further three people were killed in the severe weather in Tennessee, Dean Flener, spokesman for the state's Emergency Management Agency said.

ALERT*** If you live in or near MAYFIELD, you need to be underground if at all possible. Get to shelter NOW!

Seeing some things I didn’t want to see today in this part of town. Prayers for the families who have lost loved ones. :( #Mayfield #KYwx pic.twitter.com/c8Y6MqomM4

There are times in the weather business when I really just can’t find the words and this absolutely one of those times. I’m just numb. https://t.co/BWSfDmvaC7

The genesis of the tornado outbreak was a series of overnight thunderstorms, including a super cell storm that formed in northeast Arkansas. That storm moved from Arkansas and Missouri and into Tennessee and Kentucky.

'Unfortunately it produced a couple of deadly tornadoes along the way. One of them may have been a long-track tornado,' Storm Prediction Center meteorologist Roger Edward said. 'The killer tornado was part of that.'

The White House said in a statement that President Joe Biden had been briefed on the destruction and would receive further briefings throughout the day.

'The President has directed that Federal resources be surged immediately to the locations where there is the greatest need to alleviate suffering from the devastating consequences of these storms,' the White House said.

Emergency response has been hampered by widespread power outages, with hundreds of thousands without electricity across multiple states on Saturday.

Speaking at a press conference early Saturday morning, Beshear said:  'As of 4:45am [CST] 56,854 Kentuckians are without power. I have been personally over at the emergency operations center since about 1am overseeing our response and hearing and absorbing the difficult news in real time.'

'This has been one of the toughest nights in Kentucky history and some areas have been hit in ways that is hard to put into words,' Beshear said.

He said: 'Before midnight, I declared a state of emergency. I've activated the national guard. We are deploying 181 guardsmen including search and extraction and debris clearing folks.'

He said search and rescue officials had been working through the night to pull people from the rubble.

About 110 people were inside a candle factory in the area when the tornado ripped through, bringing down the roof and causing mass casualties, Beshear said.

The busy factory was working three shifts around the clock to fill orders for the busy Christmas season, and early reports indicate that there were scores of fatalities.

Kyanna Parsons-Perez, who was inside the factory, said the roof collapsed soon after the workers could hear and feel the howling winds and the lights began flickering.

'We could feel the wind ... then we did a little rock,' Parsons-Perez told NBC. 'And then boom everything came down on us.'

The clock tower on the Graves County courthouse in Mayfield appeared to have been toppled, photos showed. 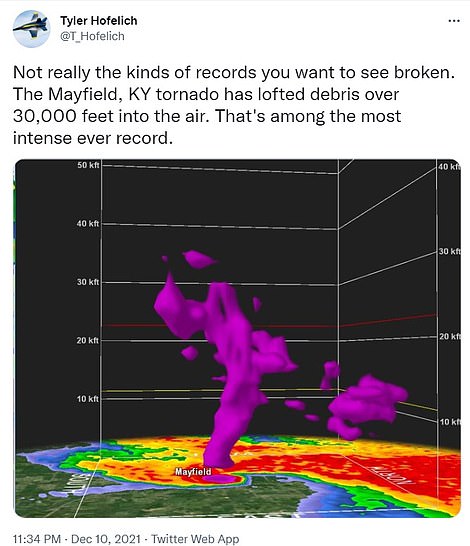 This will be a night I won't forget.. Helping with search and rescue I found this dog protecting its puppies in a collapsed 2 story home (Not sure about the people living here).. Breaks my heart so see all these people lose everything. pic.twitter.com/qxaYuwwH8D

Meanwhile, at least 100 emergency vehicles descended upon the Amazon warehouse near Edwardsville, Illinois, about 25 miles east of St. Louis, where a wall that was about the length of a football field collapsed, as did the roof above it.

It wasn't immediately clear how many people were hurt, but one person was flown by helicopter to a hospital.

Edwardsville Police Chief Mike Fillback said several people who were in the building were taken by bus to the police station in nearby Pontoon Beach for evaluation.

By early Saturday, rescue crews were still sorting through the rubble to determine if anyone was trapped inside. Fillback said the process would last for several more hours. Cranes and backhoes were brought in to help move debris.

'Please be patient with us. Our fire personnel are doing everything they can to reunite everyone with their loved ones,' Fillback said on KMOV-TV.

Fillback confirmed at a press conference early Saturday there was 'more than one fatality... at least two' at the Amazon facility.

He said authorities are still working to confirm how many people were at the facility when it was damaged. He said he believed the number was about 50.

'We're deeply saddened by the news that members of our Amazon family passed away as a result of the storm in Edwardsville,' said Amazon spokesperson Kelly Nantel in a statement to DailyMail.com on Saturday morning.

'Our thoughts and prayers are with the victims, their loved ones, and everyone impacted by the storm. We also want to thank all the first responders for their ongoing efforts on scene. We're continuing to provide support to our employees and partners in the area,' added Nantel.

The Belleville News-Democrat reported that the Amazon fulfillment center in Edwardsville opened with two warehouses in 2016, with 1.5 million square feet of space. The warehouses are used to store items until they are shipped to customers.

Here is the Total destruction of a Amazon Facility in Edwardsville IL pic.twitter.com/fqg02pkERq

SW side of Mayfield homes gone of the slab. Thousand are going to need shelter and food in the days ahead. #redcross #kywx pic.twitter.com/UisXP52TUv

'About a third of the warehouse is torn down and damaged from either straight by line winds or tornado,' tweeted Jenna Rae, with Illinois's KMOV station.

One woman said she was speaking to a family member inside the warehouse as the storm hit.

'He was on the phone with me while it was happening,' Aisha White told KMOV.

'The tornado was hitting the back of the building, the trucks were coming in, I told him to jump out the truck and duck.

'We watched the building go up, stuff hitting the cars, I told him I was on my way.'

J.B. Pritzker, governor of Illinois, tweeted: 'My prayers are with the people of Edwardsville tonight, and I've reached out to the mayor to provide any needed state resources.'

Three storm-related deaths were confirmed in Tennessee, said Dean Flener, spokesman for the Tennessee Emergency Management Agency. Two of the deaths occurred in Lake County, and the third was in Obion County - both in the northwestern corner of the state.

Five people had serious injuries, and a few others had minor ones, he said. The nursing home has 86 beds.

Day said another nursing home about 20 miles away in Truman was badly damaged but no injuries were reported. The residents were being evacuated because the building is unsafe.

Workers at a National Weather Service office had to take shelter as a tornado passed near their office in Weldon Spring, Missouri, about 30 miles west of St. Louis. One person died and two others were injured in building collapses near the towns of Defiance and New Melle, both just a few miles from the weather service office.

The storms caused a CSX company freight train to derail in western Kentucky, although it said no injuries were reported, the New York Times said.

Bill Bunting, operations chief at the Storm Prediction Center, part of the National Weather Service, said at least five states were hit by the tornadoes, naming them as Illinois, Kentucky, Tennessee, Missouri and Arkansas, the Times reported.

'It happens quick but apparently there was a little bit of time with tornado sirens going off.'

Some residents were found in the basement 'and were prepared for this,' he said.