Police have identified the Parsons Green terror suspect using CCTV after an IED attached to a timer exploded on a rush-hour Tube injuring 22, sources have said. 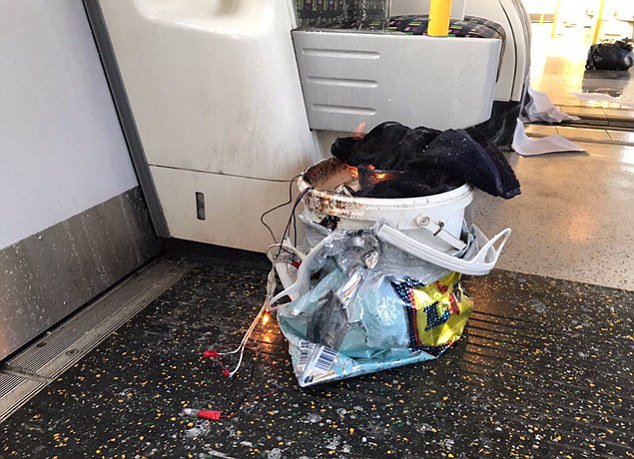 Wires can been seen hanging out of bucket inside a carrier bag on a District Line train.

The homemade bucket bomb device sent a "fireball down a carriage" as it partially detonated with a schoolboy and pregnant woman among those injured in the terror explosion.

Mayor of London Sadiq Khan announced "a manhunt is underway" as bomb squads and counter-terror cops swarmed on the scene.

He added: "The person or people responsible for this attack will be caught and will be brought for justice."

Police have revealed that the homemade bomb, likened to pressure cooker devices used in 2013's Boston Marathon attack, did not fully detonate.

The 2013 bombs, which killed three and injured hundreds, were packed with nails and ball-bearings to cause maximum damage and it is not yet clear if today's device had similar projectiles.

Theresa May is being kept informed of developments after the fifth major terror attack on British soil in six months.

The Prime Minister has chaired an emergency meeting and this afternoon announced the terror threat level will not be raised from severe to critical - although this could change as the investigation continues.

She condemned the "cowardly attack" saying "this was a device intended to cause significant harm".

Today's explosion follows four previous attacks in 2017 which saw five innocent people killed in Westminster in March, 22 killed in the Ariana Grande bombing in Manchester in May, eight killed in the van and knife rampage on London Bridge in June and one man killed when a van rammed into worshippers outside a North London mosque.