Hurricane Irma will roar through the state of Florida this weekend with destructive impacts, including wind damage, storm surge, heavy rain and possible tornadoes.

Hurricane Irma, currently hammering the north coast of Cuba, is now less than 24 hours from a potentially catastrophic Category 4 hurricane strike on Florida, the state's strongest hurricane strike since Charley 13 years ago.

Life-threatening and historic storm surge is possible in parts of South Florida, according to the National Weather Service.

A storm surge warning has also been issued from the Volusia/Brevard County Line around the peninsula to Suwanee River, including the Florida Keys and Tampa Bay. A storm surge watch is in effect from north of the Volusia/Brevard County line to the Isle of Palms, South Carolina on the east coast and on the west coast from north of the Suwannee River to Ochlockonee River.

In addition, hurricane and tropical storm watches and warnings have been issued.

Hurricane warnings now extend as far north as Fernandina Beach on the Atlantic side, and up to Aucilla River on the Gulf side. Included in the hurricane warnings are the Florida Keys, Naples, Ft. Myers, the Tampa/St. Petersburg metro, Miami, and West Palm Beach.

A hurricane watch is also in effect for the Georgia coast northward to Edisto Beach, South Carolina, as well as from Aucilla River to Indian Pass along the Gulf of Mexico coast. A watch means hurricane conditions are possible within 48 hours. 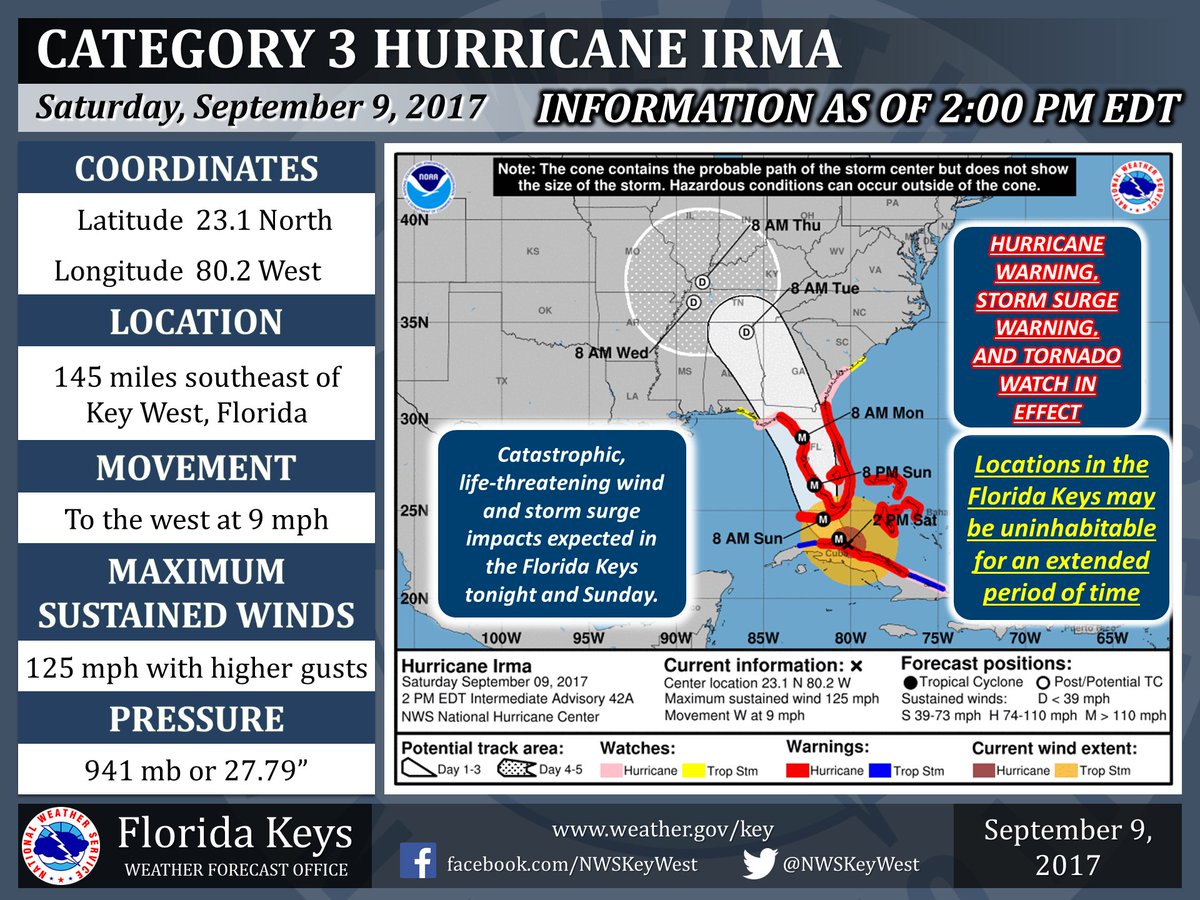 Irma may take advantage of deep, warm water in the Florida Straits and reintensify before striking Florida with Category 4 intensity Sunday.

At this intensity, small deviations in wind speed intensity will not significantly change impacts. A direct hit will be devastating.

Here's a general overview of the timing for impacts from Irma.

According to the latest National Hurricane Center's forecast, the center of Irma will pass over the Florida Keys Sunday morning, then track toward the southwest Florida coast Sunday afternoon.

The following life-threatening water-level rises (storm surge) are possible in South Florida Sunday, according to the National Hurricane Center, if they occur at high tide:

PLEASE evacuate as instructed by local emergency managers if you're in an area where storm surge is forecast. Water (storm surge, rainfall flooding) is what claims the large majority of lives in hurricanes.

It's not too late to get off the Keys!!! You still have time, this morning, to get out! Please, the Keys are not safe. #FLkeys #Irma pic.twitter.com/9NYqL7PsPT

If that wasn't enough, up to 25 inches of rain is possible. Here are the latest rainfall forecasts from the National Hurricane Center and Weather Prediction Center:

Yet, another threat will be for isolated tornadoes, especially to the north and east of where the center passes.

Irma's center is expected to track up the Florida west coast Sunday into Monday.

Dangerous water-level rises (storm surge) are also possible in North Florida early next week, according to the National Hurricane Center, if they occur at high tide:

Locally heavy rainfall is expected, with up to 20 inches possible, based on the latest rainfall forecasts from the National Hurricane Center and Weather Prediction Center:

The center of Irma is then expected to track into Georgia Monday night into Tuesday.

Dangerous water-level rises (storm surge) of 4 to 6 feet are also possible from Isle of Palms, South Carolina to Fernandina Beach, Florida according to the National Hurricane Center, if they occur at high tide.

Significant inland wind damage and rainfall flooding could occur in parts of Georgia and the Carolinas, as well.

Dangerous surf and coastal flooding will likely exist throughout the southeastern U.S. coastline even well away from Irma's center this weekend into early next week.

In fact, the National Weather Service in Charleston, South Carolina, says that record tide levels, topping those during Hurricane Matthew, are possible at Ft. Pulaski, Georgia and storm surge at Charleston Harbor Monday could top that seen from Matthew, exceeded only by Hurricane Hugo in 1989.

Heavy rainfall may is expected to spread across the Southeast. Here are the latest rainfall forecasts from the National Hurricane Center and Weather Prediction Center:

Isolated tornadoes will be a concern into early next week.