As the US experiences its third-hottest July on record, the situation may only get worse as Americans will soon have to pay even more for meat and crops.

Americans already struggling with inflation may soon have to pay even more for food as farmers kill off their existing crops and sell their livestock amid ongoing drought conditions.

According to a new report from the American Farm Bureau Federation, an insurance company and lobbying group that represents agricultural interests, 37 percent of farmers from the Great Plains through California are killing off crops that won't reach maturity — up 13 percent from last year.

One-third of farmers also reported destroying or removing orchard trees and other multi-year crops, up from 17 percent the year before, while two-thirds of respondents reported selling off portions of their herd or flock. 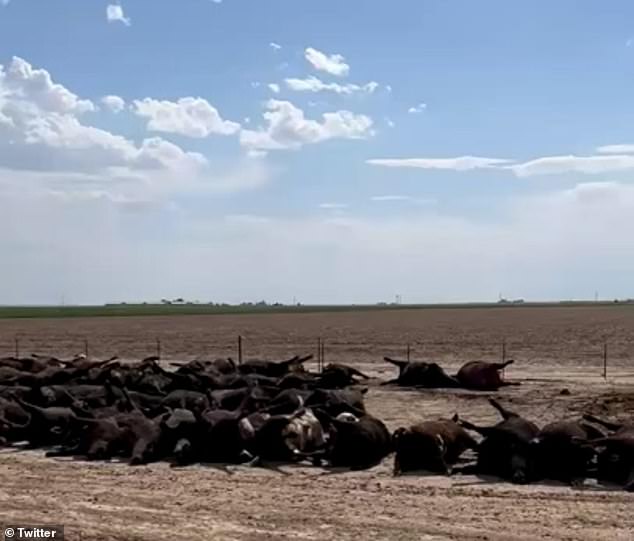 Pictures released in June  showed thousands of cows laying dead under the Kansas sun amid a heat wave which reached 106 degrees.

They said they were forced to do so due to ongoing drought conditions as the Farm Bureau Federation estimates nearly 60 percent of the west, south and Central Plains are experiencing severe droughts following the third-hottest July on record.

It also ranked in the top 10 hottest Julys on record for every state in the west except for Montana, the National Centers for Environmental Information reported, while the US Department of Agriculture says a 'rapidly intensifying drought gripped the central and southern Plains, and mid-west.'

Much of the western United States is still under extreme drought conditions, according to the US Drought Monitor, and Zippy Duvall, the president of the Farm Bureau Federation told CNN Americans may feel the effects of this drought 'for years to come.'

He explained that US consumers will now have to even spend more on certain meat and crops as they consider 'partially relying on foreign supplies or shrinking the diversity of items they buy at the store.' 37% of farmers from the Great Plains through California are now killing off crops that won't reach maturity — up 13 percent from last year. 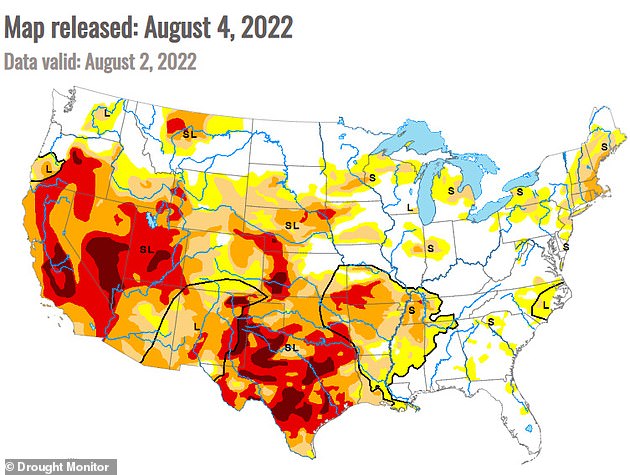 More than half  the country was in some level of drought for the fourth week in a row, the US Drought Monitor reported earlier this month.

The Farm Bureau Federation's survey — which was sent out to state and county Farm Bureau leaders, farmers and ranchers in 15 states that make up half of the country's agricultural production value from June 8 to July 20 — shows that there was a massive shortage of harvest yields this year.

Seventy-four percent of farmers reported a 'prevalent' reduction in harvest, and many are now destroying some of their existing crops to make way for others that could hopefully survive.

In California, for example, half of all respondents said they have had to remove their trees and multiyear crops due to the ongoing drought conditions there, where authorities are limiting water usage.

One producer even reported dropping all fruit on five acres of young Cabernet grapes to help them survive after zero water was applied over the last two years.

At the same time, Duvall said, 'Many farmers have had to make the devastating decision to sell off livestock they have spent years raising' as 57 percent of respondents reported having local restrictions on water use.

And as inflation continues to run rampant, at 8.5 percent, the price of fertilizer for grass, crops and feed remains expensive, and the cost of diesel makes it prohibitive for ranchers to truck in additional water.

Herds are now down 50 percent in Texas, where one rancher said, 'We have sold half our herd, and may not be able to feed the remaining.' 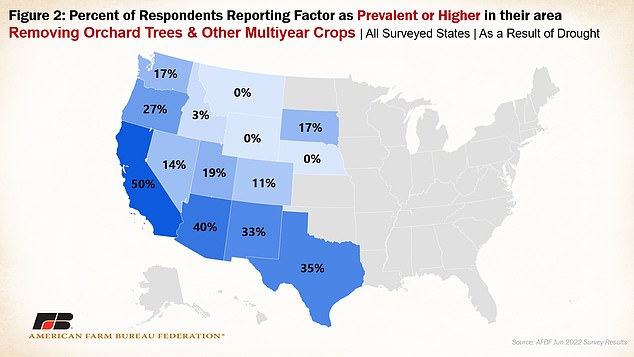 In some states, ranchers have now moved to sending their livestock to slaughterhouses ahead of schedule as the heat remains so bad that they are not able to properly look after the animals.

In June, footage emerged showing thousands of cows laying dead under the Kansas sun amid a heat wave.

A spokesperson for the Kansas Livestock Association said heat stress killed the cattle as temperatures and humidity spiked over the weekend and cooling winds disappeared.

The deaths are thought to have occurred in Ulysses, though DailyMail.com could not independently confirm where the video was taken.

The footage shows row upon row of dead cows laying on their backs with a passerby seemingly recording the video and uploading it to TikTok.

The Kansas Department of Health and Environment knew of at least 2,000 cattle deaths due to high temperatures and humidity as of Tuesday, spokesperson Matthew Lara said.

But Iowa Corn, quoting two livestock experts, reported that up to 10,000 cattle could have been killed in the heat wave.

The state said extreme heat and humidity killed thousands of cattle in Kansas in recent days, with sizzling temperatures continuing to threaten livestock in the third largest cattle state behind Texas and Nebraska. 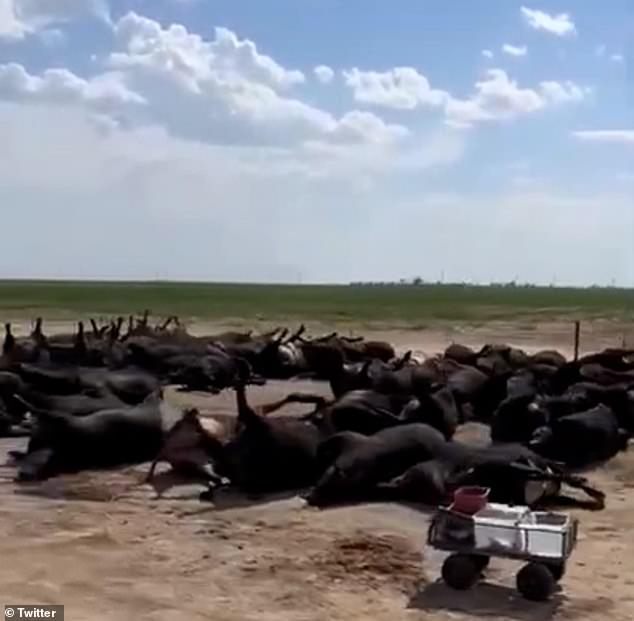 Footage shows row upon row of dead cows laying on their backs with a passerby seemingly recording the video and uploading it to TikTok.

But the Farm Bureau Federation says the situation may only get worse, as regional surface water expectations are down 50 percent from what they should be and local governments enact new measures to conserve the water that's left.

More than half of the respondents in the survey reported that they were already facing local restrictions on water use, as key water sources in places like Lake Mead and Lake Powell along the Colorado River, which provides water to 5.5 million acres of land in seven western states, is operating at less than 30 percent of its capacity.

To make matters worse, the federal government announced on Tuesday the Colorado River will operate in a Tier 2 shortage condition for the first time since January.

That means that Arizona, Nevada and Mexico will have to further reduce their water usage.

Of the impacted states, Arizona will face the largest cuts — 592,000 acre-feet — or approximately 21% of the state's yearly allotment of river water, CNN reports.

'Every sector in every state has a responsibility to ensure that water is used with maximum efficiency,' Tanya Trujillo, the Department of the Interior's assistant secretary for water and science said in a statement.

'In order to avoid a catastrophic collapse of the Colorado River System and a future of uncertainty and conflict, water use in the Basin must be reduced.'

The drought comes at an inopportune time for Americans, as inflation continues to drive the price of food up.

The Bureau of Labor Statistics reported earlier this month that the price of fruits and vegetables are now up 9.3 percent from last year, and the price of meat and poultry is up a whopping 15 percent.

Nearly half of America's food banks are now seeing increased demand for handouts, as homeowners say the prices of food have pushed them to seek help.

Now, 21 percent of Americans have turned to food banks, according to a Tipp Insights poll this month. About half of respondents were switching to cheaper store brands and giving up costly items like meat.

And with this drought, the Farm Bureau Federation reports, consumers can expect to spend even more on meat and crops as the supply diminishes.

'For cattle and beef, once the market processes the excess animals sent to slaughter and has a smaller breeding herd to operate off of - [price increases] could be six months to well over a year,' Daniel Munch, an economist at the American Farm Bureau Federation, reported.

'For specialty crops, it could be immediate upon harvest,' he noted.