Two California Sisters, Ages 5 and 8, Are Found Alive After Going Missing in Woods for 44 Hours

The girls were trained in outdoor survival through their local 4-H club and authorities believed that helped them to stay safe. 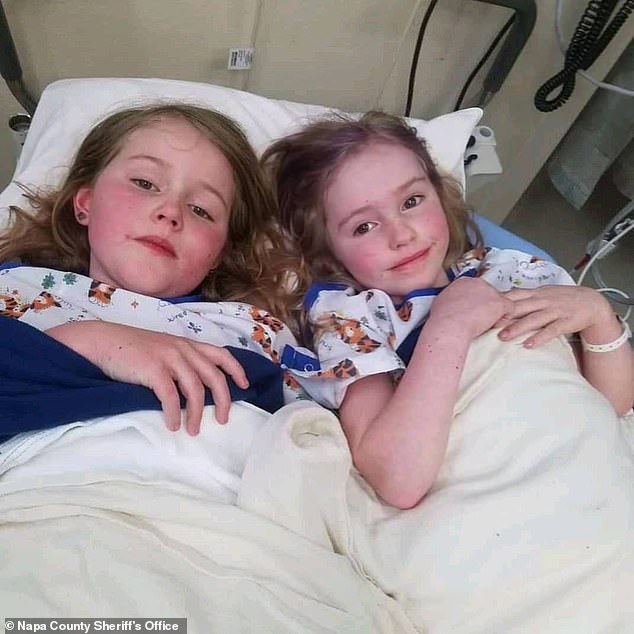 The sisters were rescued on Sunday morning and taken to a nearby hospital for treatment. Napa County Sheriff's Office

The two California sisters who were found alive on Sunday after going missing in the woods for 44 hours were seen enjoying pizza in the hospital as their mother set up a GoFundMe account to raise $10,000 to repair her driveway.

Photos shared on the account show eight-year-old Leia Carrico and her five-year-old sister Caroline Carrico eating a half pineapple and ham and pepperoni and cheese pizza as they sit in their hospital bed.

The sisters also enjoyed some sodas as well as ice pops following their rescue.

Meanwhile, their mother, Misty, set up the GoFundMe account to help reconstruct her driveway. 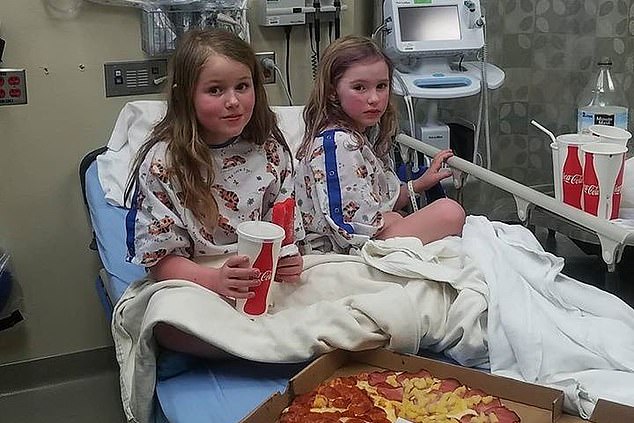 Photos shared on a GoFundMe account show eight-year-old Leia Carrico (left) and her five-year-old sister Caroline Carrico (right) eating a half pineapple and ham and pepperoni and cheese pizza as they sit in their hospital bed.

While Misty remains grateful that 'the whole world came to our aide' when their daughters went missing, she says 'the unfortunate side affect is my 6 mile dirt driveway and the driveways of all my neighbors was destroyed by all the traffic'.

Misty was referring to the dozens of search and rescue teams that helped find her daughters.

'We can hardly make it home from the hospital. I'm asking for donations to put rock on our road. any extra money will be used to rock my neighbors road,' she wrote on the account. By Monday afternoon, the account had raised the $10,000. 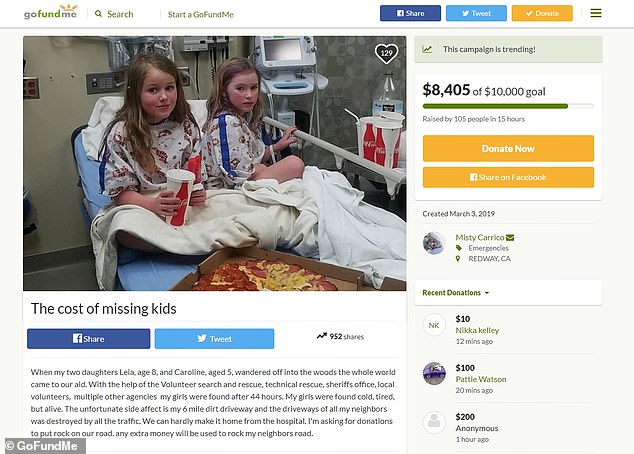 Meanwhile, their mother, Misty, set up the GoFundMe account (pictured) to help reconstruct her driveway. She said the driveway was destroyed by rescue crews while they were searching for her daughters. 'I'm asking for donations to put rock on our road,' Misty said.

On Monday, the Humboldt County Sheriff's Office also shared photos of the young girls being reunited with their parents, Misty and Travis.

The sheriff's office said it was an 'absolute miracle' that the sisters were found 'safe and unharmed'.

'Welcome home girls...welcome home!' officers wrote in the caption of a few photos from the rescue.

On Sunday afternoon, Humboldt County Sheriff William Honsal announced that the girls had been found safely around 10.30am after they spent 44 hours in the woods.

The sisters were last seen outside their home in Benbow, north west of Sacramento, on Friday at 2.30pm.

Authorities said the sisters vanished after walking off into a wooded area near their home.

Honsal said during a press conference that the girls were found 1.4 miles away from their home. 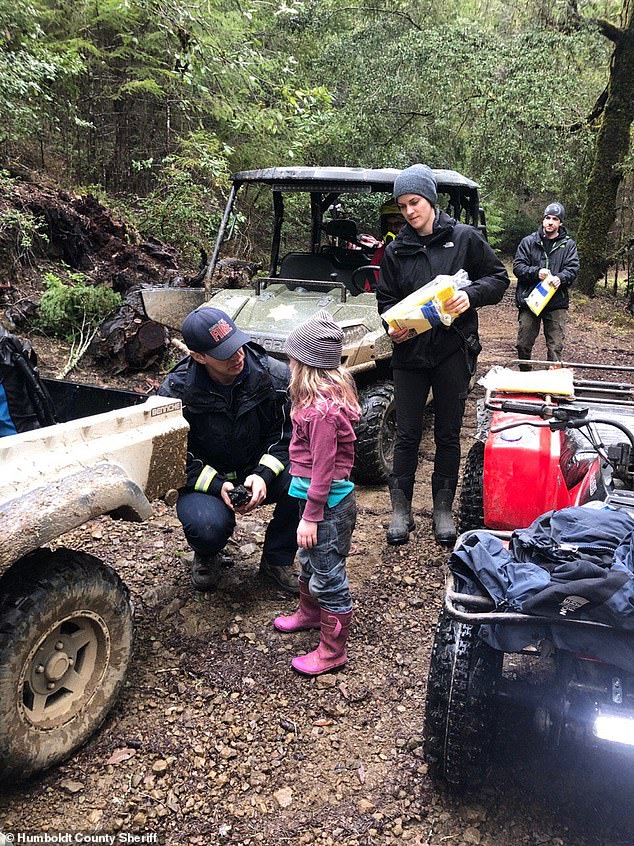 The Humboldt County Sheriff's Office shared this photo of one of the girls being rescued. 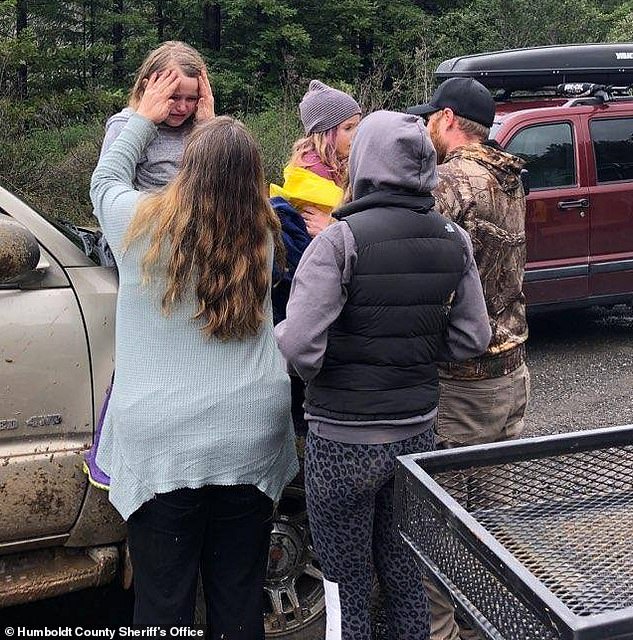 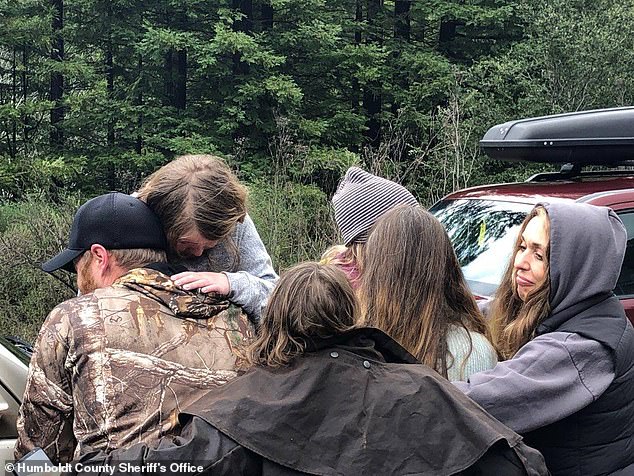 Honsal said the girls were trained in outdoor survival through their local 4-H club and authorities believed that helped them to stay safe.

They were also wearing boots and had eaten granola bars at some point while they were missing, he said.

'I am pleased to report that we are all witnessing a miracle today,' Honsal said Sunday.

Honsal said they were located by a a fire captain and firefighter who had been following their boot tracks in the search area. 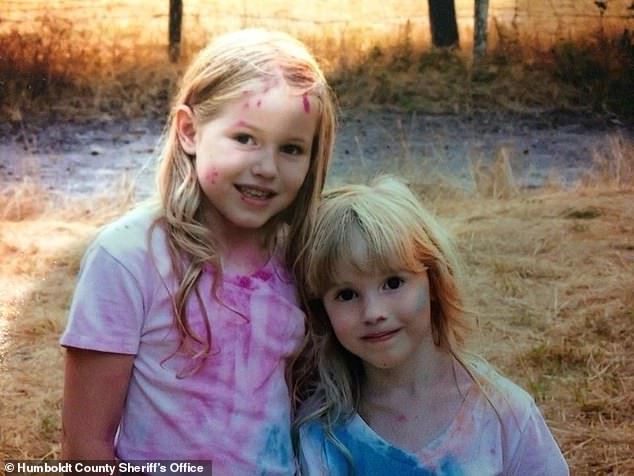 Police confirmed that the sisters, Leia (left) and Caroline (right), had been found on Sunday afternoon. Though the girls were dehydrated and cold, they were uninjured and 'in good spirits'. Humboldt County Sheriff's Office

Using helicopters and tracking dogs, dozens of police and rescue personnel combed a vast and rugged rural area in the frantic search for the sisters.

Several volunteers also came out to help first responders search for the sisters. One mother and son drive 1.5 hours just to help find Leia and Caroline.

Before they disappeared, the girls had asked their mother, Misty Carrico, if they could go for a walk.

The Humboldt County Sheriff's Office said they were notified of their disappearance around 6pm after the mother and neighbors tried to search for the girls themselves.

The search team then grew bigger and included National Guard members from Fresno and the US Coast Guard, which provided one of its helicopters on top of a Black Hawk helicopter also being used.

Rescuers were hopeful about finding the girls Saturday after they came across prints from the girls' rubber boots and wrappers from the granola bars, Lt Mike Fridley said.

Search and rescue teams are now out. Footprints and granola bar wrappers were found yesterday. Rescuers will retrace their steps in the hopes of finding the girls. @HumCoSO @KCET #missingsisters pic.twitter.com/6EhXJm5HIZ

Lori Beach and her son drove 1.5 hours to join the search for the #carricosisters who went missing in rural #HumboldtCounty .they are two of at least a 100 search and rescue folks here. Briefing by @HumCoSO to start soon. @KCET #missingsisters pic.twitter.com/2HliWtBg5C

Look at the line of cars arriving at the command post here in #Benbow. The search continues for two little sisters who disappeared from their home in rural #humboldt County two days ago. @HumCoSO @KCET pic.twitter.com/cmSlLO2ZpA


According to rescuers, the girls sang lullabies and told stories to each other while walking through the night. Photos moments after they were found safe. courtesy of Kory Beacher @KCET #humboldt #missingsisters pic.twitter.com/OzRzEH4K2W

'The wrappers showed us a direction from where they started to where the wrappers ended up at,' Fridley said.

Their mother told authorities she had only just purchased that same brand of granola bars.

Fridley said he was the one who got to call the girls' mother and tell them her daughters were alive.

'She melted on the phone,' he said.

Honsal described the search area as a vast, heavily-wooded terrain with cold and and sporadically rainy conditions.