Railroads say strike could cost $2 billion a day. A pair of unions representing 57,000 conductors and engineers say they are willing to strike over quality-of-life issues if they can’t reach a contract deal with rail carriers.

Business groups and political officials are growing increasingly concerned about the potential for a freight rail strike that could further snarl the country’s supply chains this holiday season if a union contract dispute can’t be resolved.

A 30-day moratorium that has so far forestalled a strike is set to end Friday for members of the two largest U.S. freight rail unions, the Brotherhood of Locomotive Engineers and Trainmen, or BLET, and SMART Transportation Division. Both have yet to reach deals with rail carriers, which have struck or are close to reaching tentative agreements with the other 10 of the country’s 12 rail unions.

A strike by BLET and SMART-TD, which represent 57,000 conductors and engineers who staff most trains in two-person teams, could cause problems that reverberate across the economy even after it ends. President Joe Biden and senior administration officials made a fresh effort on Monday to step in and mediate the dispute, hoping to head off a strike, a White House official told NBC News. Meanwhile, Amtrak preemptively canceled three long-distance train routes that run on lines operated by freight railroads.

The two unions say quality-of-life concerns — primarily carriers’ scheduling practices that leave many workers on call 24/7 every week of the year — remain a major obstacle to an agreement and one they are willing to strike over.

“The railroads are using shippers, consumers, and the supply chain of our nation as pawns in an effort to get our Unions to cave into their contract demands knowing that our members would never accept them,” the unions’ presidents, Jeremy Ferguson of SMART-TD and Dennis Pierce of BLET, said in a joint statement. 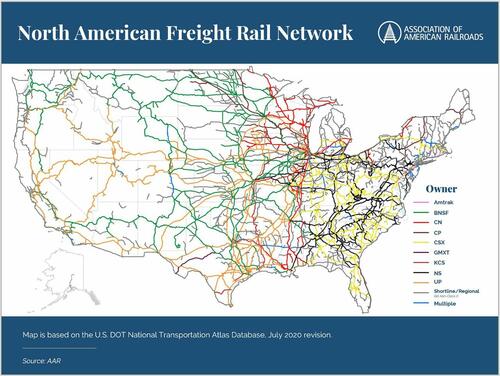 The National Railway Labor Conference, which represents the rail companies, hailed the 10 unions it has reached agreements with and urged the pair of holdouts to follow suit.

“It is critical that the remaining unions promptly reach agreements that provide pay increases to employees and prevent rail service disruptions," it said in a statement. “The two operating craft unions, BLET and SMART-TD, continue to maintain positions that were expressly rejected” by federal mediators.

Business groups are growing increasingly worried about the potential for a strike, which the Association of American Railroads, an industry group, warns could cost the U.S. economy some $2 billion a day.

Forty percent of goods that are shipped long-distance in the U.S. traverse the rail system, and a strike could deliver a catastrophic blow as the economy emerges from stresses like supply-chain delays, labor shortages and inflation.

“A national rail strike would be an economic disaster — freezing the flow of goods, emptying shelves, shuttering workplaces, and raising prices for families and businesses alike, but that is exactly what is likely to happen in less than four days,” Suzanne P. Clark, the president of the U.S. Chamber of Commerce, said in a statement Monday.

Negotiations to avert a strike, which have been progressing for months, heated up within the last week as Labor Secretary Marty Walsh, Transportation Secretary Pete Buttigieg and Agriculture Secretary Tom Vilsack have sought to bridge differences between the two sides, the White House official told NBC News.

“The parties continue to negotiate, and last night Secretary Walsh again engaged to push the parties to reach a resolution that averts any shutdown of our rail system,” a spokeswoman for the Labor Department said in a statement Monday. “All parties need to stay at the table, bargain in good faith to resolve outstanding issues, and come to an agreement.”

A strike was forestalled temporarily this summer when President Joe Biden convened a three-person board to study the issue and freeze negotiations in July, under labor laws that apply to the rails.

The panel recommended last month that workers be given raises amounting to a 24% increase over a five-year period ending in 2024, with a 14% raise backdated to 2020 available immediately.

But workers say the industry has imposed increasingly punitive scheduling practices that remain a major issue as rail companies’ labor forces have shrunk. Freight rail employees at major carriers say they are often required to be on call year-round, getting most time off only after having worked a set number of hours for days in a row.

Biden can no longer freeze negotiations to avert a strike. Congress could act to stave one off or force a settlement, as it has done in the past, but BLET and other labor groups are pressuring officials to stay out of the dispute, feeling newly empowered in the relatively favorable climate for unions and workers seeking to organize.

A rail worker in the Midwest, who asked for anonymity because he isn’t authorized to speak publicly about the negotiations, said the round-the-clock schedules were a big enough issue to merit a strike. He said he and his co-workers felt newly emboldened by recent labor successes at companies like Starbucks and others and felt that the public is more willing to side with workers now.