The main concern will be heavy rain over a swath of the Southeast and Florida. Flash flooding and river flooding may become more widespread and last well into next week. 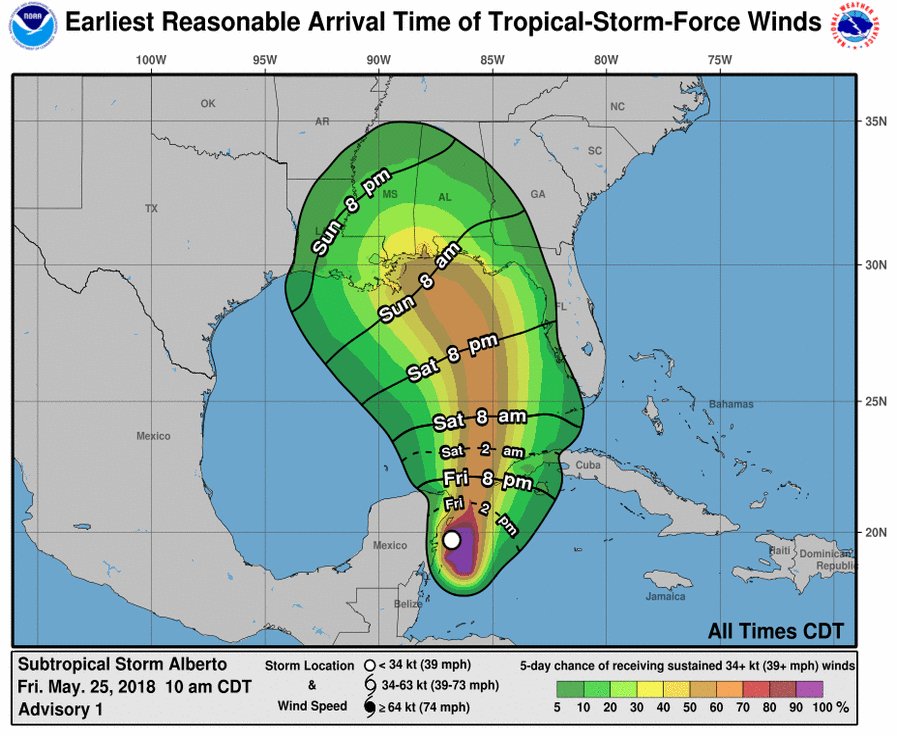 Subtropical Storm Alberto has formed in the western Caribbean Sea, and will track north through the Gulf of Mexico through the Memorial Day weekend, bringing the threat of flash flooding, rip currents, strong winds, coastal flooding and tornadoes to the Southeast.

The season's first named storm of the 2018 Atlantic hurricane season, formed near the Mexican resort of Cozumel late Friday morning, according to the National Hurricane Center (NHC).

The NHC found the area of surface low pressure, with thunderstorms sheared to its east, sufficient to categorize the system as a subtropical storm.

This is basically a hybrid between a tropical storm with a warm core and a more typical low-pressure system you may find in the higher latitudes with colder, upper-level low pressure present.

The Air Force Hurricane Hunters are flying around Alberto to better understand its organization, structure and strength.

Alberto is expected to track north into the Gulf of Mexico by Saturday, approaching the northern Gulf coast by late Sunday.

According to the NHC, tropical storm conditions may reach the northern Gulf Coast as soon as Sunday morning. A building dome of high pressure over the Upper Midwest responsible for a holiday weekend heat wave will then slow Alberto down some near the Gulf Coast from late Sunday into Memorial Day.

The overall environment is expected to become more favorable for some strengthening over the Gulf of Mexico. Some wind shear may remain over the system, but water temperatures are sufficiently warm, in fact warmer than late May average, over the northern Gulf of Mexico.

This may allow Alberto's core to warm enough to become a fully tropical storm in the Gulf of Mexico later this weekend.

- Alberto will bring heavy rainfall and flooding to parts of Cuba, Florida and the Southeast.

- Heavy rain, gusty winds and choppy seas are expected this holiday weekend in the eastern and northern Gulf Coast.

- This storm is expected to arrive on Sunday and Monday near the northern Gulf Coast.

Let's break down these impacts in more detail below, as best as we can at this early stage.

Flooding the Main Concern, Regardless

Regardless of what this system is called by meteorologists, the main threat from this system will be heavy rain and flash flooding in the Southeast that could last well into next week.

Developing upper-level low pressure over the Gulf of Mexico and high pressure aloft east of the Bahamas will channel a plume of deep tropical moisture from the southwestern Caribbean Sea and Central America into the Southeast and Florida.

Even after landfall, Alberto will move slowly, maintaining the tropical moisture fetch into the Southeast, possibly extending into parts of the Ohio Valley or East well into next week.

Flood watches are already in effect for parts of the Southeast, lasting from Saturday evening through Tuesday along parts of northern Gulf Coast.

Slow-moving tropical or subtropical storms are notorious heavy rain producers, and that will be the case here.

A broad area of at least 3 inches of rain is likely from Florida to the northern Gulf Coast to parts of the Carolinas through early next week.

Slow-moving rainbands or clusters of thunderstorms may produce heavier rainfall over a shorter time period – on the order of a few hours – in localized areas this weekend into next week, triggering flash flooding, particularly in urban areas, foothills and mountains, and in areas where the ground has been saturated by recent heavy rain over the past one to two weeks.

In most areas away from the Gulf Coast in Alabama, Georgia and the Carolinas, 3-hour rainfall of 3 inches or less would trigger flash flooding, according to the National Weather Service.

This heavy rain will eventually trigger river flooding that will last well into next week, as the National Weather Service in Mobile noted. 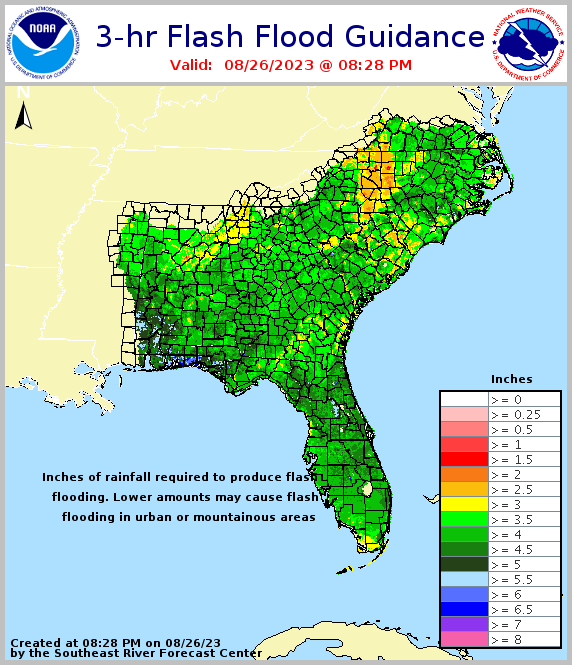