Southern California Continues to Rumble With About One Aftershock Every Minute After Back to Back 6.4 and 7.1 Magnitude Earthquakes

A powerful 6.4-magnitude earthquake rattled Ridgecrest, California and the surrounding area on the 4th of July followed by more than 1,400 aftershocks, according to scientists. On Friday, an even stronger quake - with a magnitude of 7.1 - rattled the region.

The earth hasn't stopped rumbling under Southern California since Thursday, when a powerful 6.4-magnitude earthquake rattled Ridgecrest and the surrounding area.

The quake was followed by more than 1,400 aftershocks, according to scientists. On Friday, an even stronger quake -- with a magnitude of 7.1 -- rattled the region, leaving residents traumatized, Ridgecrest Mayor Peggy Breeden said Saturday morning.
"Many of them are sleeping outside tonight," Breeden said. "They're fearful to be in their homes. Many are choosing to just be with their neighbors ... in their sidewalks, in their driveways and some of them are in the streets."
There's been an average of one aftershock per minute since Friday's quake in the southern part of the state, according to the United States Geological Survey website.
More than 4,700 quakes have occurred since Thursday, said USGS geophysicist John Bellini.
"They are coming in every 30 seconds, every minute," he said.
After Friday's 7.1 quake, three quakes of magnitude 5 or greater struck within the first hour, he said. 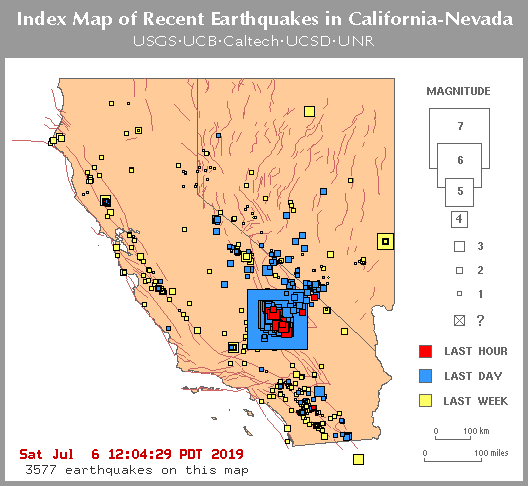 After an earthquake as powerful as the one that hit Friday, residents can expect an aftershock reaching up to a magnitude of 6.0, officials said Saturday, and should even be prepared for a scarier shake.

"I would probably start taking some stuff off the walls if they're not already down," Ridgecrest Police Chief Jed McLaughlin said Saturday morning. "Make sure you're not sleeping under something that's still hung up."
The chief warned residents to stay prepared and load up on supplies while stores are still open, "just in case that we have something bigger than we had today."
He said residents should remain vigilant for the next two weeks. 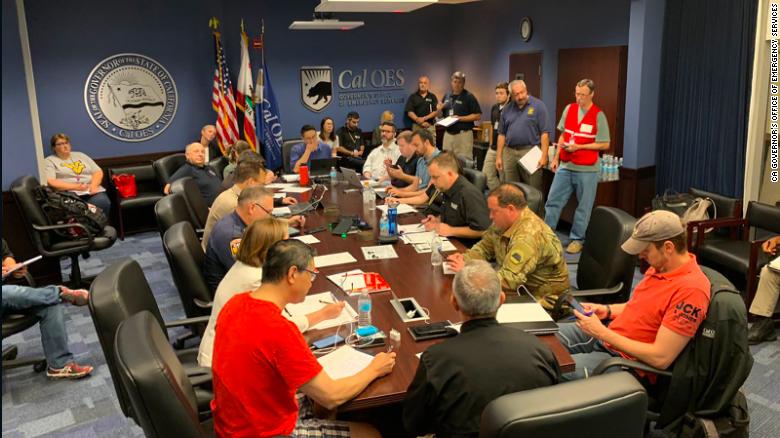 State leaders for emergency management are coordinating mutual aid and regional response from State Operations Center - focused on meeting the need in the Ridgecrest/Kern Co area. California Office of Emergency Services
"This isn't going to stop in the near future," he said. "The aftershocks, they haven't slowed down since the 7.1 (magnitude earthquake). For a period of time there was constant vibration."
The constant aftershocks are keeping everyone on edge, Ridgecrest resident and Jessica Weston told CNN's Cyril Vanier Saturday.
"It's fairly frequent, especially since the big one hit this evening it feels like a tiny little earthquake," Weston said. "Everybody's on edge obviously because as soon as you feel that little rumble... of course we're all wondering is this another big one."
Weston said she was driving with her mom when the earthquake hit Friday, and "the car just kind of bounces up and down."
"In my experience, (it's) the least scary place to be. It's way scarier when you feel the floor kind of like pulling out from under you and you wonder what's going to fall on your head," she said.
Weston said she plans to sleep in the back of her car, where she feels safer.

CalTech seismologist Lucy Jones said in a press conference Friday both the Thursday and Friday earthquakes were part of an ongoing "very energetic system."
The second quake released more than 11 times the energy of the first earthquake, CNN Meteorologist Brandon Miller said.
Officials are not ruling out the possibility of more. Jones said early Saturday there's about a 10% chance that Searles Valley will see another 7.0-magnitude earthquake.
"Today's M7.1 has a 1 in 20 of being followed by something even bigger," she said. "Smaller quakes -- M5s are likely and a M6 is quite possible."

A community that didn't get to recover

Ridgecrest had begun clearing up the damage from Thursday's shock when it was hit again a day later.
The 6.4 Thursday quake was followed by more than 1,000 aftershocks. Fires broke out, gas lines were broken and a major hospital was evacuated, the mayor said that night.
A day later, the same images: multiple fires, and patients being wheeled out of the hospital, some still hooked to IVs.
"It is not an impossible task to take care of all this," Breeden said. "But it is going to be a longer task than we thought the other day."
Azzam Fatala, a market owner in Trona, an unincorporated community in neighboring San Bernardino County, was cleaning merchandise and broken bottles off his store's floor Friday morning.
"What are you going to do? What are you going to start with? What shelf? How much money was lost?" he told CNN affiliate KFSN.
And after Friday night, Fatala's store had even more losses, the affiliate reported.
The small town of about 2,000 had no power or water Saturday morning, a San Bernardino County Fire spokesman told CNN.
Here is more information on Earthquake Emergency Kits, Survival Kits, Emergency Food Supplies, and Solar Power.