South Hit by Devastating Floods as Mississippi's Pearl River Swells to Highest Level in 37 Years and 3,000 Residents are Ordered to Evacuate the State Capital Jackson - and Rains Will Continue Through Thursday

Rivers and dams in Mississippi and Tennessee have swelled, triggering devastating floods in the South

Days of relentless rain have caused devastating flooding in the South and led rivers and dams in both Mississippi and Tennessee to swell, as evacuations are ordered for thousands of people.

In Mississippi the Pearl River reached its third-highest crest on record on Monday just before noon at 36.7 feet. The river passed major flood stage on Sunday morning after exceeding 36 feet, causing the Ross Barnett Reservoir to breach capacity.

The area has not seen the river this high in 37 years since 1983, prompting the evacuation of more than 3,000 people in Jackson.

Mississippi Governor Tate Reeves declared a statement of emergency on Saturday as the capital city braces for more rain this week. He warned Sunday that the state faces a 'precarious situation that can turn at any moment'.

In a tweet, Reeves said the state should prepare for 'the third worst flood' in its history. 'This is a historic, unprecedented flood,' Reeves added.

On Monday Reeves said there have been 16 assisted evacuations with Wildlife and Fisheries and there were 200 door to door visits and 600 contacted to evacuate flooded areas.

'Although this is relatively good news for Jackson and Central Mississippi, we as a state are not in the clear yet,' he said.

This week the South, already reeling from abnormally wet weather and flooding, will be inundated with even more rain as a series of storms will sweep through Louisiana, Mississippi, Alabama and Georgia through Thursday, hammering the Pearl River basin the hardest. 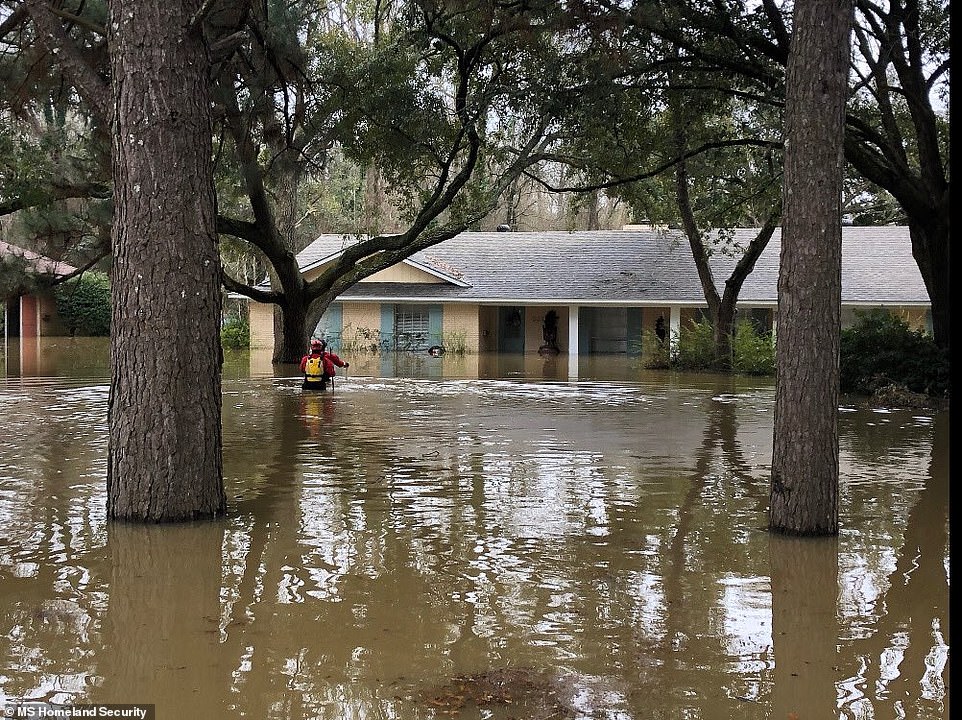 As of Monday morning minor, moderate and major flooding was reported on nearly every gauge on the Mississippi River south of Cape Girardeau, Missouri, according to Accuweather.com.

Flooding was also common along larger rivers in the Carolinas, Louisiana, western Alabama and southern Arkansas.

More rain will pound the area on Tuesday and Tuesday night in a storm system that will bring snow to parts of the Upper Midwest and the Northeast.

Rains will continue, but be less intense on Wednesday, and storms will barrel eastern Texas and Louisiana Wednesday night into Thursday.

Mississippi will see one to two inches of rainfall early this week.

'With the very wet soil conditions, expected one to two inch rainfall amounts Tuesday into Wednesday will lead to areas of flash flooding and worsen ongoing river flooding,' the NWS said.

Tennessee is also being battered by pounding rain and fast-rising waters that are sweeping entire neighborhoods underwater.

In some areas floods have reached the rooftops of homes, causing entire neighborhoods to disappear in muddy water below the Tennessee Valley Authority's Pickwick Reservoir.

'It absolutely kills you, knowing that' houses are getting destroyed downstream from the dam, TVA spokesman Jim Hopson said Monday.  'We have engineers on duty 24-7 trying to figure out what's the most effective way to move this water downstream with the least impact. They feel it. I feel it.'

February's rains have been '400 percent of normal, and we have more coming in this week. It's kind of a never-ending battle,' Hopson added. 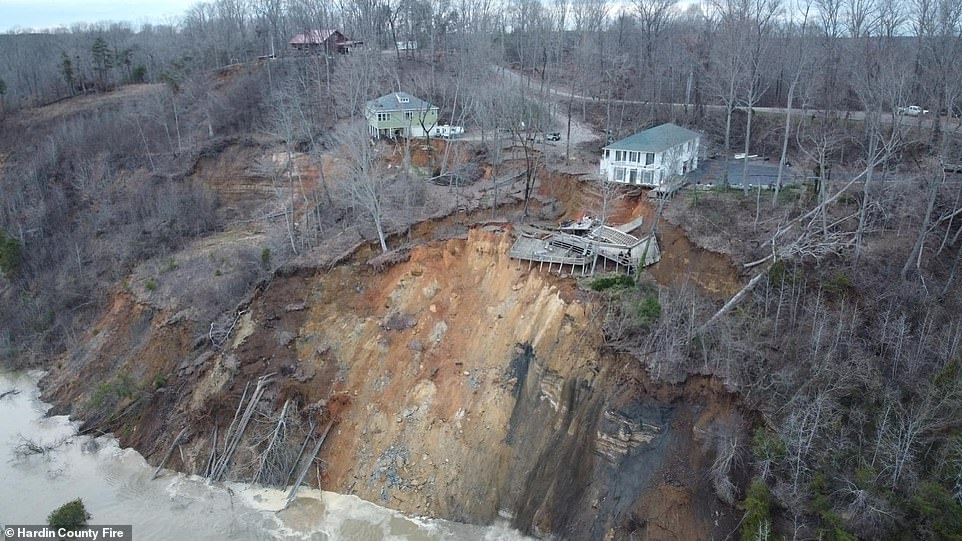 Tennessee is also being battered by pounding rain and fast-rising waters that are sweeping entire neighborhoods underwater. This image released by the Hardin County Fire Department in Savannah, Tennessee shows a devastating landslide that swept a home into the Pickwick Reservoir on Saturday. 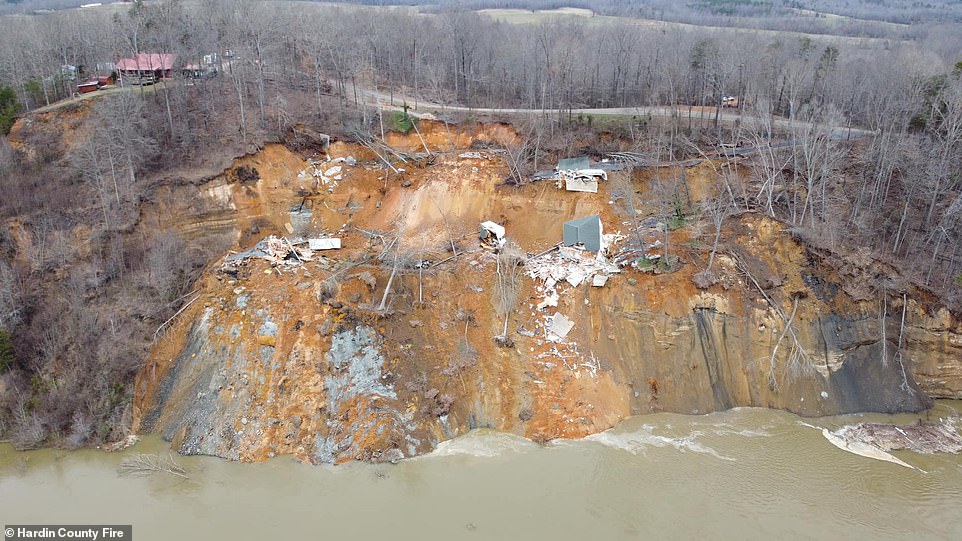 In the landslide two homes collapsed and plunged into the waters along Glendale Road following heavy rains in the area that loosened the soil. Hardin County Fire Department

To tackle the deluge and floodwaters 146,000 sandbags were distributed in Jackson, Mississippi. The National Guard, the Highway Patrol and other high-water rescue teams are also on standby.

Gene McGee, mayor of Ridgeland, Mississippi, issued a mandatory evacuation for those who live in Harbor Pines subdivision in Ridgeland.

Residents paddled canoes, kayaks and small fishing boats to check on their houses, giving lifts to other neighbors along the way in one Jackson neighborhood.

Some were able to get inside while others peeked into the windows to see what, if any damage, had been done inside. Outside floodwaters lapped at mailboxes, street signs and cars that had been left in driveways.

In a bit of good news, officials at a reservoir upriver of the capitol said Sunday that water levels in the reservoir had stabilized, allowing them to send less water downriver.

But even with that development, officials urged residents to pay attention to evacuation orders, check on road closures before traveling and stay out of floodwaters, warning that even seemingly placid waters could mask fast-moving currents and pollution.

'We expect the river to continue to rise over the next 24 hours or so, ' Reeves said at a news conference in Jackson. 'We are not out of the woods yet.'

Jackson Mayor Chokwe Lumumba said power had been shut off to 504 residences as a safety precaution.

He said some city homes had been flooded but officials do not yet know how many. About 30 people are at a shelter that has been set up in Jackson, he said.

Nearly 2,400 structures across the three counties closest to the river and the reservoir could be impacted, meaning they either get water inside or are surrounded by water, said Malary White, of the Mississippi Emergency Management Agency.

That includes 1,925 structures in Hinds County, 461 in Rankin County and 31 in Madison County.

In the suburb of Flowood, John and Jina Smith had packed up as much as they could and left their home as waters rose Thursday.

On Sunday, their neighbor Dale Frazier took them back to their house in a rowboat, where they checked on the damage, then got in their own canoe and rowed away.

'We've been able to stay in here when the water gets up,' John Smith said. 'But as you've watched it over the years, you know when to get out. It´s time to get out this time.'

A foot and a half of water was inside his house, Smith said. He'd already been in touch with a contractor and insurance agent about rebuilding. 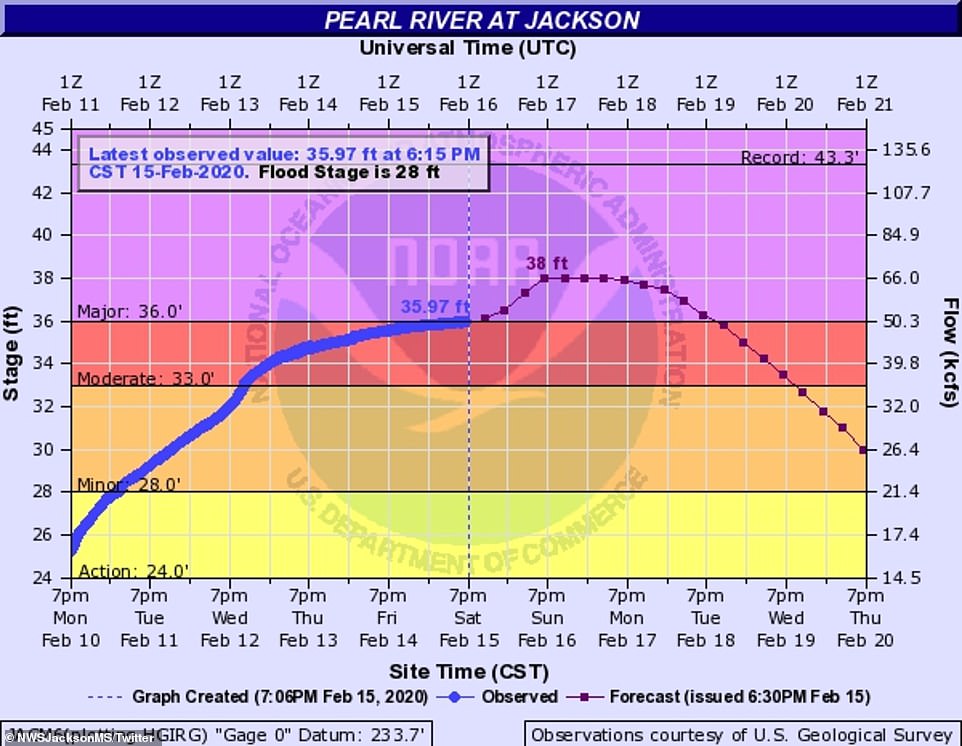 The Pearl River is expected to reach its highest peak of 38 feet on Sunday evening - it is currently at 36 feet on Monday.

Both he and his wife said they love their home, where they can sit on their back porch and watch deer and other wildlife.

'It´s going to take a while for us to rebuild, but we are safe, and we´re all OK,' Jina Smith said.

On Frazier's lot next door, the water was at the bottom of the driveway but had not crept inside the one-story house where he's lived for 23 years.

'The water is very close to my house. It could flood; it could not flood. It depends on the crest right now,' he said.

Down the street, a Presbyterian church and several businesses were flooded.

While the focus now is on the Jackson area, the heavy rains and flooding has affected a much larger swathe of the state. State emergency management officials said Sunday that they had received preliminary damage reports from 11 counties connected with the severe weather that hit the state starting on February 10.

On Saturday night, officials released water from the nearby Barnett Reservoir to control its levels.

They urged residents in northeastern Jackson who live in the flood zone downstream from the reservoir to leave immediately. By Sunday morning, Reeves said the reservoir's inflow and outflow had equalized.

Reservoir officials said that allowed them to release less water than expected.

'We have some good news today,' said John G. Sigman, who oversees the reservoir's operations, during a separate news conference Sunday afternoon.

Once the river crests Monday, it will take the water three to four days to go down significantly. Part of the reason is that forecasters expect more rain between midday Tuesday and Wednesday evening.

'It will be days before we are out of the woods and waters start to recede,' the governor said.