Rent the highest in 20 years, electricity the most expensive since 2005 and furniture prices higher than EVER: The staggering costs hitting Americans' pockets under Biden as inflation soars to the highest point in 40 years

Inflation hit a 40-year high in January, with prices rising 7.5% from last year.

The high inflation rate has slammed Americans in the pocketbooks as basic costs of living - such as food, electricity, gas, and shelter - have skyrocketed during Joe Biden's presidency.

Inflation hit a 40-year high in January, with prices rising 7.5% from last year. That number was driven by higher costs of food, electricity and shelter costs, the Bureau of Labor Statistics said on Thursday. Medical costs have also risen during the pandemic.

The number was an unpleasant surprise for the White House, which continues to argue that inflation will naturally go down over the next year. It also presents a dilemma for the Federal Reserve, which is weighing raising interest rates in March.

But while Washington dithers, Americans are paying the price.

Apartment rental costs rose 0.5% in January, the fastest pace in 20 years. Electricity prices were up 4.2% last month, the sharpest rise in 15 years and a 10% increase from last year.

The average U.S. household is spending an additional $250 a month because of inflation, according to analysts.

'A lot of people are hurting because of high inflation. $250 a month - that’s a big burden,' Ryan Sweet, a senior economist at Moody’s Analytics who conducted the analysis, told the Wall Street Journal. 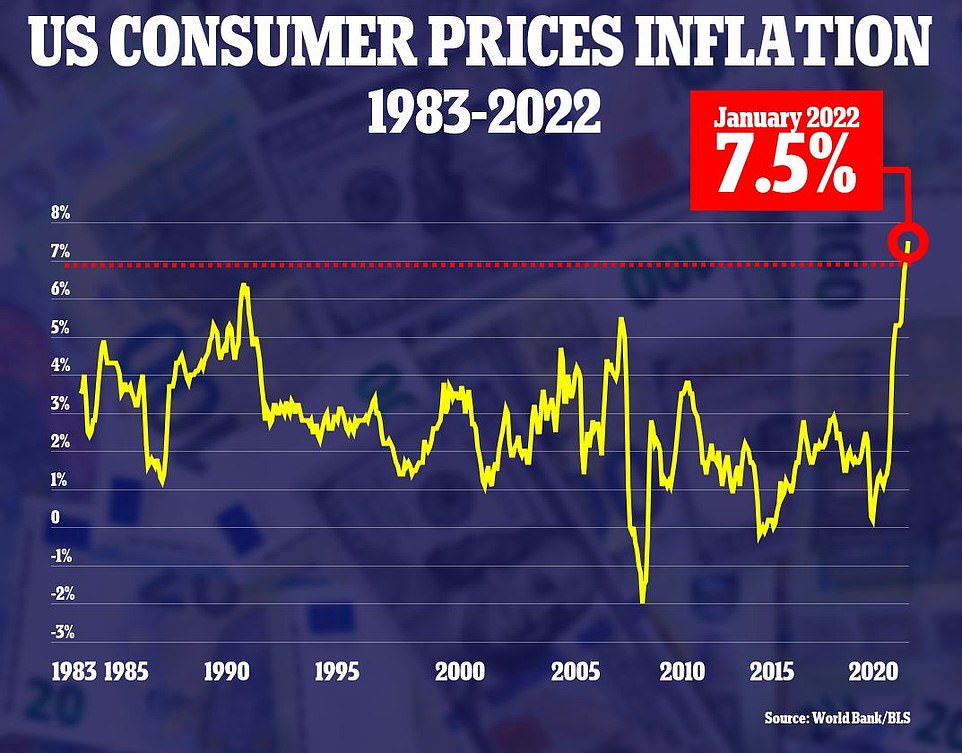 Inflation hit a 40-year high of 7.5 percent, the Labor Department announced Thursday, a figure not seen since the Carter administration. 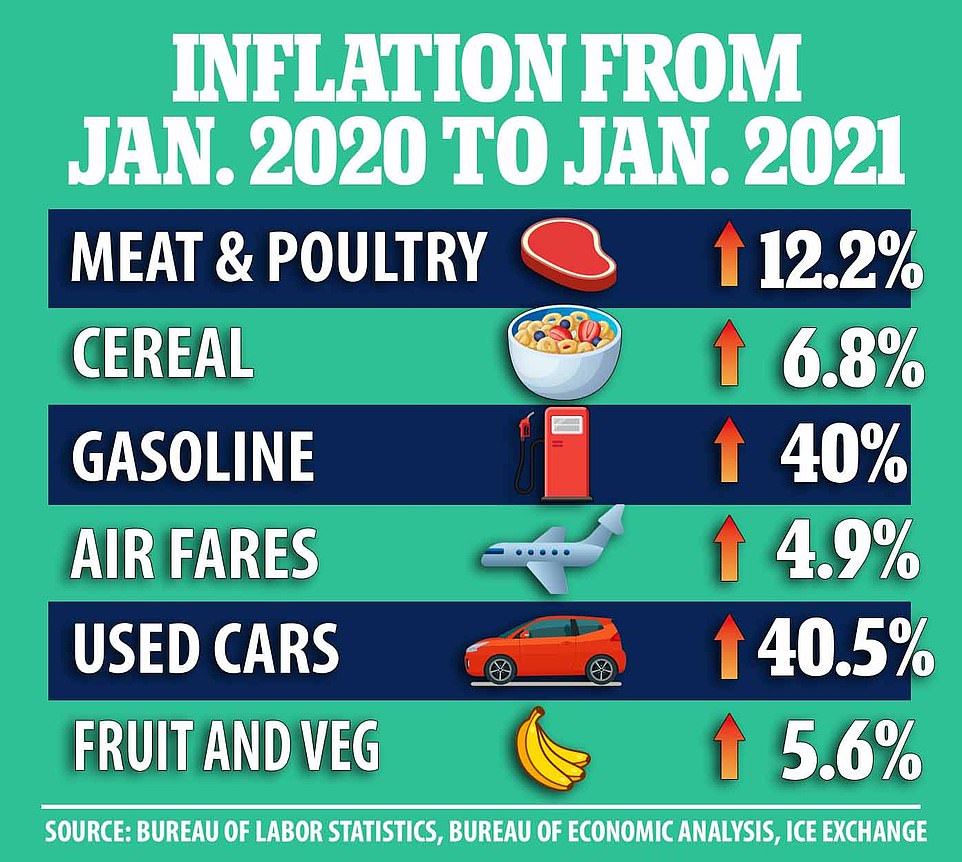 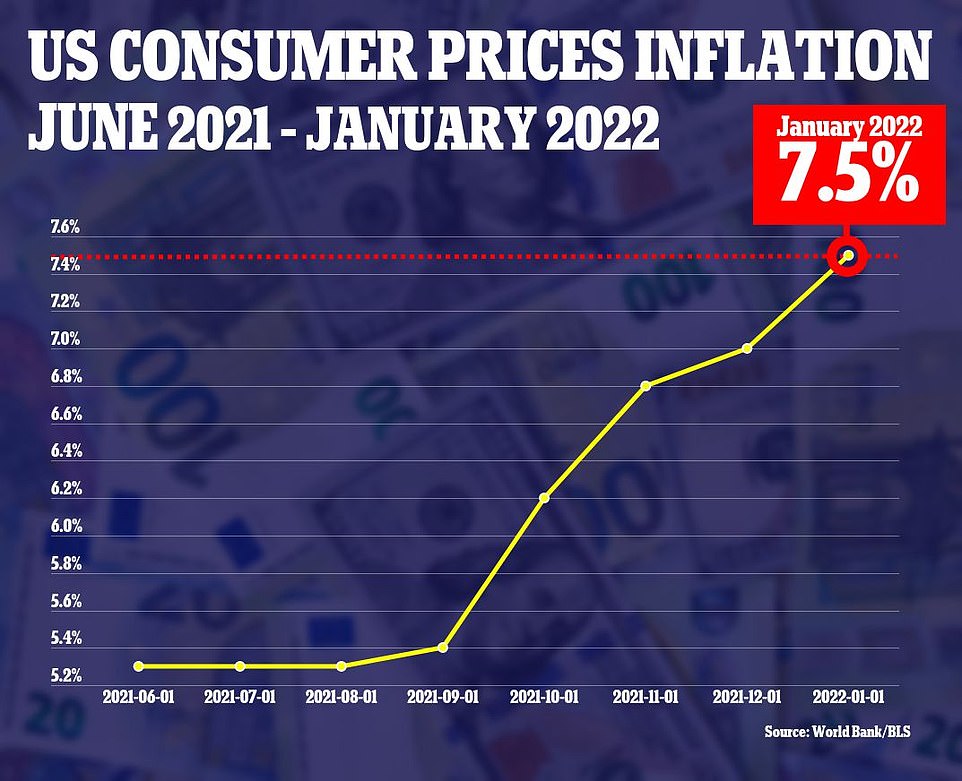 Prices rose for a sixth consecutive month, meaning Americans have consistently had to shell out more for everyday life since August 2021.

Wages have increased but not enough to keep up with rising costs of basic necessities. Even with wages up around 5.7%, taken in with inflation, it's resulted in an average 2% pay cut for workers.

Biden's poll numbers have sunk as inflation has risen. His approval rating hit below 40% this week for the first time in the RealClearPolitics polling average. Americans have given him low marks for his handling of the economy and have expressed frustration with the current economic situation.

Grocery prices were up nearly across the board in January, averaging a 1% increase for the month.

The only food group that didn't see a price rise raise was nonalchoholic beverages, which was unchanged.

The rising cost of food has had a trickle down effect with popular chain restaurants like Chipotile, Starbucks and McDonalds raising prices due to the combination of inflation and the high demand for supplies.

Energy costs were also on the rise for Americans. Electric costs increased sharply in January at 4.2%. Electricity rose 10.7% over the last year.

Meanwhile, new car prices were unchanged last month but are up 12.2% from a year ago.

That has affected the price of used-cars, which rose 1.5% in January and are up a 41% from a year ago.

Wells-Fargo broke out the affect of inflation on different demographic groups. Their findings:

Some Democrats have fretted the high cost of living will hit them at the ballot box in this November's midterm election, where control of Congress is at stake.

Even members of Biden's own party are distancing themselves from the economic disaster, with West Virginia Senator Joe Manchin taking a veiled swipe at the White House for seeming to 'think that spending trillions more of taxpayers’ money will cure our problems.'

'It's beyond time for the Federal Reserve to tackle this issue head on, and Congress and the Administration must proceed with caution before adding more fuel to an economy already on fire,' the West Virginia Democrat said in a statement.

*With rapidly increasing prices and our nation's supply chain being severely strained, it is crucial for everyone, now more than ever, to secure items that are still needed on your emergency preparedness 'TO DO' list before those items become more expensive, more difficult, or even impossible to get.