Multiple Wildfires Break Out Across Los Angeles: Hundreds of Firefighters Battle to Contain Growing Blazes in Southern California That Have Killed at Least 2 and Forced 100,000 to Evacuate

Raging wildfires have broken out across neighborhoods in Los Angeles, killing two people, burning homes and forcing thousands to evacuate. 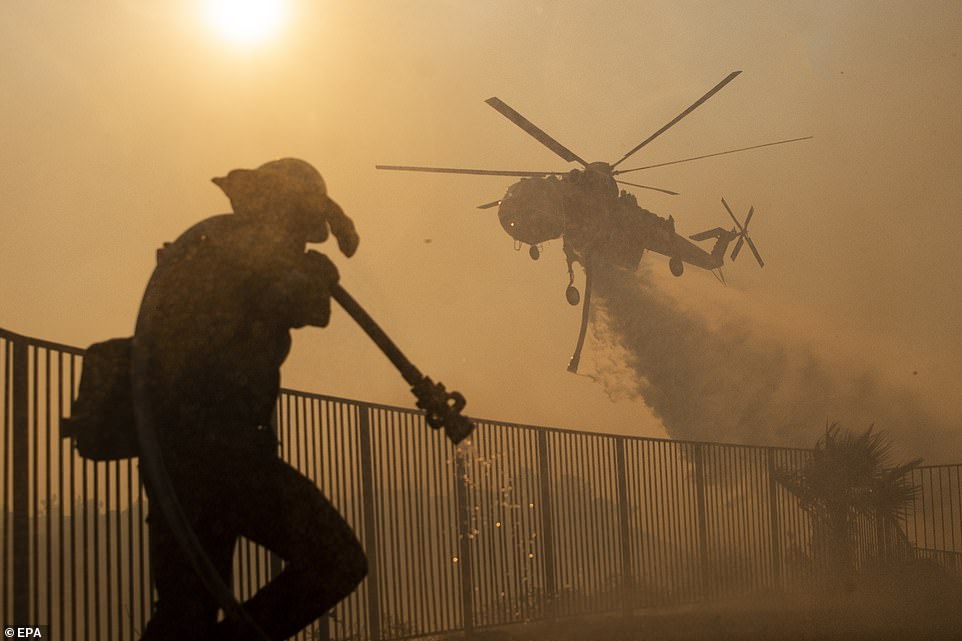 Firefighters work to extinguish the Saddleridge Fire in Porter Ranch on Friday. EPA

The latest fire, known as the Saddleridge Fire, broke out after 9pm on Thursday in Sylmar, north of Los Angeles, along the 210 Freeway near Yarnell Street and jumped the highway, shutting down multiple freeways.

Officials say the fire has quickly grown, scorching more than 4,700 acres by 8am on Friday with zero containment. The cause of the fire is still unknown.

Helicopters made repeated water drops as 1,000 firefighters on the ground attacked flames in and around homes, 25 of which have been damaged so far.

Authorities have ordered mandatory evacuations in the Granada Hills, Porter Ranch and Oakridge Estates neighborhoods affecting about 100,000 people on the northern edge of the city in the San Fernando Valley area.

The first confirmed fatality was a man his late 50s went into cardiac arrest as a result of the blaze on Thursday night. Paramedics performed CPR and transported the man to the hospital, where he was pronounced dead.

On Friday, it was confirmed that 89-year-old Arvickson perished while she was trying to escape the Sandalwood Fire that swept through her mobile home park on Thursday night.

Turner said Arvickson called from her cellphone to say she was evacuating shortly after the blaze was reported in the Calimesa area.

Arvickson's neighbors saw in her garage as flames approached, according to Turner. A short time later the neighbors saw the garage on fire, but they don't know if she'd managed to escape, he said.

Leanne Sutter, a reporter for ABC 7 said in a Facebook post on Friday hat her family confirmed the news of her death.

Lois Arvickson, 89 (pictured), of Calimesa, died Thursday night when the Sandalwood Fire swept through the mobile home park where she lived. Facebook

According to Los Angeles Fire Department Chief Ralph Terrazas, the Saddleridge Fire is burning at a rate of 800 acres per hour.

As you can imagine the embers from the wind have been traveling a significant distance which causes another fire to start,' he said.

Dozens of schools and universities were closed as administrators urged to students to stay safe. 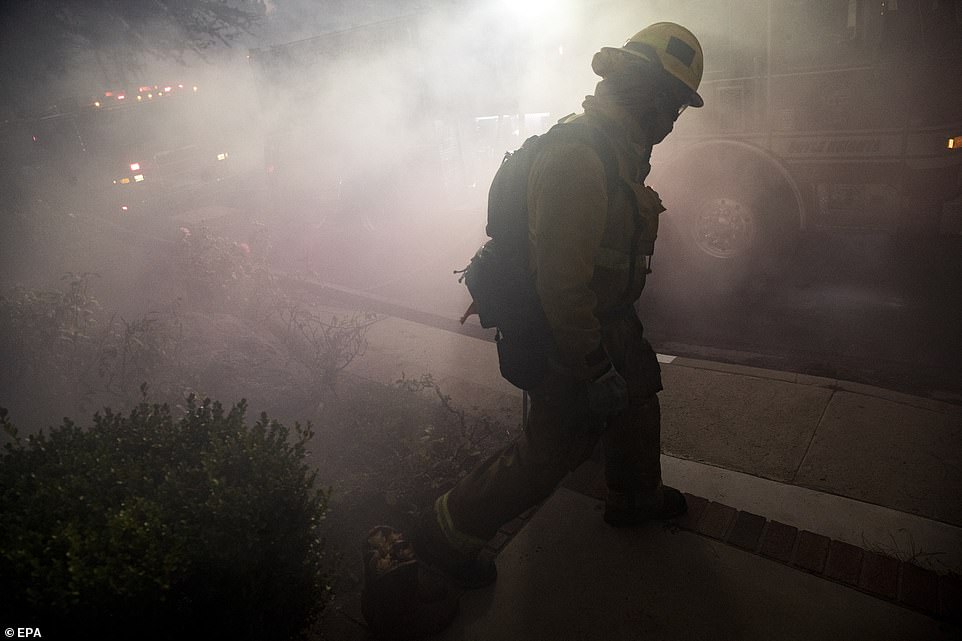 A firefighter walks through the smoke after battling the Saddleridge Fire all night in Porter Ranch on Friday. EPA 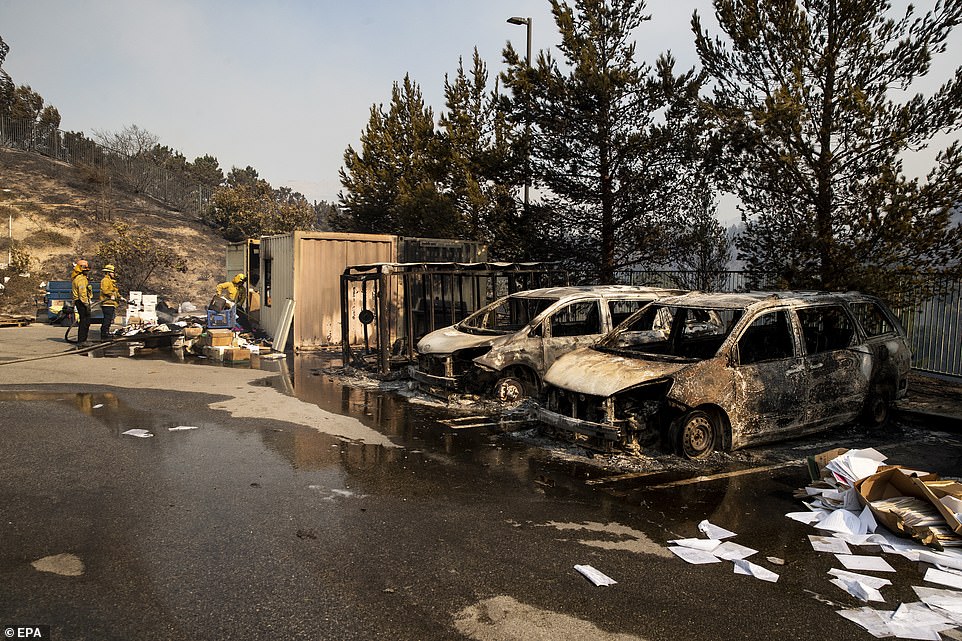 Firefighters work to extinguish the Saddleridge Fire on a parking lot next to two burnt cars in Porter Ranch on Friday. EPA

On Thursday night, drivers shared terrifying footage of the flames raging on either side of the freeway before it was shut down.

Emergency services are seen at intervals along the highway in the dramatic footage, as the fire burns orange into the night's sky.

In one of the videos the driving conditions become so bad due to the smoke that cars begin to pull over at the side of the road.

In separate videos, part of the footage shows huge flames rising up into the sky from a building as helicopters circle above the area.

Land further behind in the background is also on fire, with large areas of grass burning.

Wow, that was an intense drive on the 5. Be safe out there. #SaddleridgeFire pic.twitter.com/d85t6TbHlF

Much of northern California, from San Francisco to the Oregon border, remains under a state 'red flag' fire alert.

Meanwhile, the nearby Sandlewood fire continued to rage on.

According to Riverside County officials, the fire started when trash being hauled caught fire and the driver dumped the load alongside the road to prevent the truck from being set ablaze.

Fire officials were investigating what caused the trash in the truck to catch fire in Calimesa.

No injuries have been reported aside from a firefighter who suffered a 'minor' eye injury and was transported to a hospital for treatment.

'We need people to leave now while they can,' fire officials said during a press conference Friday morning, according to FOX 11. 'If you stay in [mandatory evacuation] areas we cannot guarantee that we will save you.'

Only 10 percent of 800 acres of the Sandalwood Fire contained as of Friday morning, the Riverside County Fire Department said.

Winds gusted dangerously as forecast before calming in Northern California, where Pacific Gas & Electric faced hostility and second-guessing over its widespread shutoffs.

Governor Gavin Newsom criticized PG&E and ordinary customers complained about the inconveniences caused by the unprecedented blackouts that began midweek.

PG&E, though, suggested it was already seeing the wisdom of its decision borne out as gusts topping 77 mph raked the San Francisco Bay Area amid a bout of dry, windy weather.

'We have found multiple cases of damage or hazards' caused by heavy winds, including fallen branches that came in contact with overhead lines,' said Sumeet Singh, a vice president for the utility company. 'If they were energized, they could've ignited.'

Because of the dangerous weather in the forecast, PG&E cut power Wednesday to an estimated two million people in an area.

The 2018 wildfire season last year was the deadliest and most destructive ever recorded in California, with about 100 residents and firefighters killed.

More than 8,500 fires erupted, scorching more than 1.8 million acres and causing billions of dollars of damage.