Residents are urged to stay off the roads from the Midwest to the Atlantic Coast, and to carry a survival kit in their vehicle at all times.

Winter Storm Gia continued its siege on the Midwest Saturday after leaving hundreds of motorists stranded on Missouri roads, causing scores of crashes, knocking out power to tens of thousands and killing at least five.

The Weather Channel's Jim Cantore, reporting Saturday morning from the interstate west of St. Louis, noted that many people remained stuck in conditions he called "horrible." 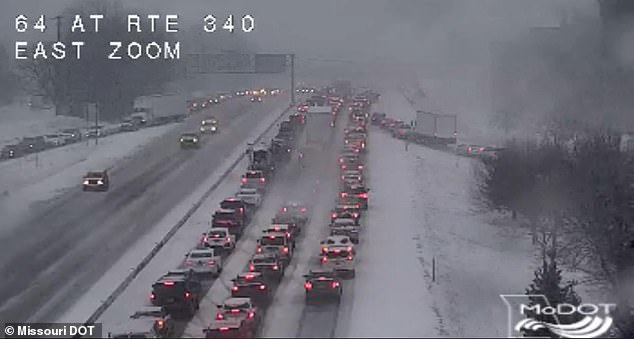 DOT Cam shows traffic on Interstate 64 outside of St Louis at a complete standstill.

Some interstates in Missouri, including I-70 and I-44, reopened Saturday morning after being shutdown Friday night, but treacherous conditions continued.

At least three fatalities in Missouri are a result of weather-related crashes, local state police tweeted Friday night. The storm that has dumped up to 17 inches of snow in some areas of Missouri has also resulted in more than 2,000 calls for help and more than 175 crashes that left at least 40 people injured. Some 300 vehicles slid off the road by late Saturday morning, the Missouri State Highway Patrol.

State police in Kansas also reported fatality crash related to the storm, KVOE reported. Bradley Horton, 62, of Topeka was killed after losing control of his pickup truck and striking the center barrier on the Kansas Turnpike. Horton reportedly was not wearing a seatbelt at the time of the crash.

Saturday afternoon, more than 95,000 Missouri customers were without power, according to PowerOutage.us.

(MORE: Where Is Winter Storm Gia Headed Next?)

People are abandoning cars in front of me now. Cant make it up roadway. 3 cars left behind so far in St Louis #MOWX pic.twitter.com/uwbgSvkm3o

In a Saturday morning tweet, Missouri Gov. Mike Parson expressed concern and to stay off the roads until conditions improved.

"Plane tipped - wing almost hitting the ground. ... I’m on exit row. Bus coming to get us. Stewardess just announced 'congratulations on surviving your first plane crash,'" he said in a tweet.

KOMU-TV reported the plane was American Airlines Flight 5766 from Dallas. The station said passenger Theresa Cook said there were no injuries. A bus sent to take passengers from the plane got stuck, and passengers had to be driven to the terminal three at a time. 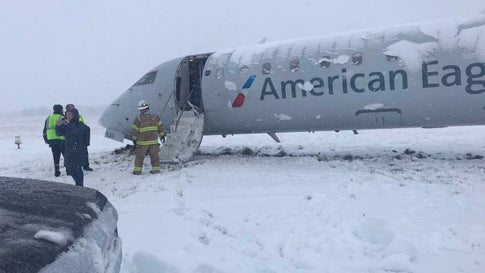 American Airlines Flight 5766 from Dallas-Fort Worth slid off the runway after it landed in Columbia, Missouri, during Winter Storm Gia on Friday, Jan. 11, 2019. (Image via Twitter)