Major Storm Bearing Down on West Coast that Will Cause Havoc Across US - as Forecasters Predict Three Feet of Snow, Tornadoes, Blizzards and Heavy Rain

Tornado warnings issued for Arkansas, Louisiana and Mississippi on Tuesday and Wednesday.

A large storm system developing in the Pacific is expected to bring heavy rain, snow and even tornadoes to the US as it hits the country on Saturday.

Forecasters with the National Weather Service Prediction Center said the storm would bring one to three feet of snow across the mountains in the West Coast before hitting the Northern Plains with a blizzard.

By the middle of the week, it will create conditions for tornado-producing storms across the South, and then bring heavy rainstorms and possible snowfall to the Northeast by the end of the week.

The NWS said the storm system is expected to hit the West Coast on Saturday morning, warning those in the Sierra Nevada and mountain ranges that they could see three inches of snowfall per hour.

'This will result in extremely dangerous travel, especially across mountain passes,' The weather tracking organization said. 'If you must travel, prepare for rapidly changing conditions, and carry winter driving supplies.' 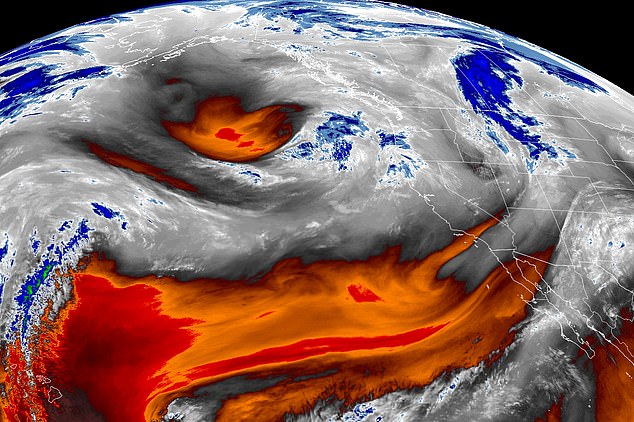 A major storm system brewing in the Pacific is set to hit the US on Saturday and bring snow, tornadoes and heavy rainfall across the country throughout the following week. 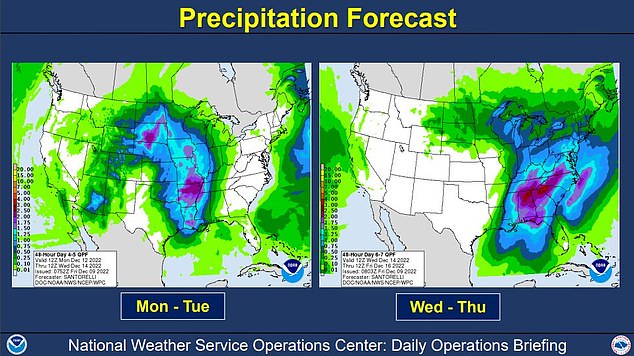 After passing the Rockies on Sunday, the storm is expected to bring blizzard-like conditions to the Northern Plains and generate tornado-producing storms in the South.

Along with the snowfall, the storm is expected to bring widespread rainfall that could leave coastal areas in California flooded.

As the storm moves westward past the Rocky Mountains, forecasters said it would create blizzard-like conditions across the Northern Plains.

Greg Carbin, chief of forecast operations for the Weather Prediction Center, told the New York Times that heavy snow and strong winds are expected to hit Colorado, Montana, Wyoming and the Dakotas, on Monday and Tuesday.

While the exact amount of snow is yet to be determined, Carbin said there was a high chance areas could see at least a foot.

'The potential does exist there for some really impressive amounts,' he told the Times, as he expects this storm system will most likely slow down afterwards.

But while the North is pelted with snow, the South will be experiencing severe thunderstorms that forecasters warn could lead to tornadoes.

Harold Brooks, a senior scientist with the National Severe Storms Laboratory, said that while winter tornadoes are rare, they can often be more dangerous than their summer counterparts.

He told the Times that because the days are shorter in winter, it means a tornado is more likely to hit after dark and make it harder for people to spot them.

The NWS issued a tornado advisory for Tuesday and Wednesday over Louisiana, Arkansas and Mississippi. 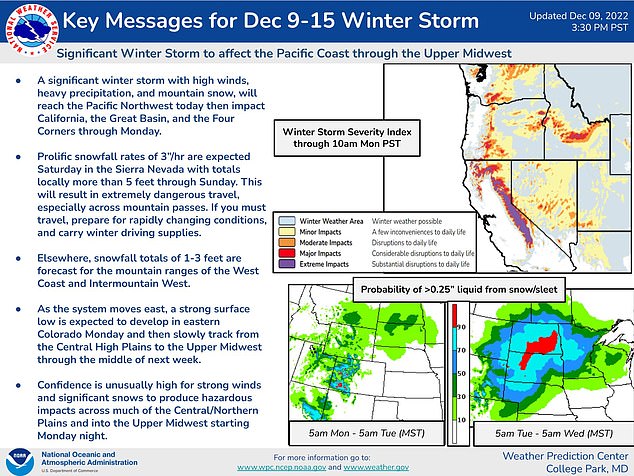 The NWS issued advisories in the West Coast mountain regions for the weekend's snowfall. 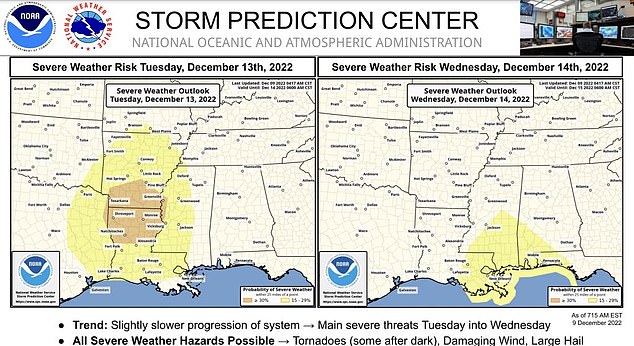 It also issued tornado warnings in Arkansas, Louisiana and Mississippi on Tuesday and Wednesday.

What the storm will bring on Thursday, Friday and the weekend across the East Coast is less certain.

Carbin told the Times that major snowfall is unlikely, but the Northeast will likely see some snow and rainfall.

Upstate New York, northern Pennsylvania and the southern half of New England will likely see a few inches of snow by next Sunday.

Carbin, however, noted that the forecast could change depending on how the storm system changes as it travels across the country next week.