Storm surge, damaging winds and heavy rain are likely impacts along the northeast Gulf Coast. Hurricane Michael will also bring heavy rain and strong winds to other parts of the southeastern United States after it moves inland.

Hurricane Michael has strengthened to Category 2 intensity, and is forecast to strike the Florida Panhandle at least as strong as a Category 3 with dangerous storm surge flooding, destructive winds and flooding rainfall. Michael will also bring heavy rain and strong winds to other parts of the southeastern United States after it moves inland.

"Michael could develop into a potentially catastrophic event for the northeastern Gulf Coast," the National Weather Service office in Tallahassee, Florida, wrote in its area forecast discussion Monday afternoon. Michael could be the strongest hurricane to landfall along the stretch of Florida's Panhandle Gulf Coast in 13 years.

Michael is currently centered about 360 miles south of Panama City, Florida, and is moving north. 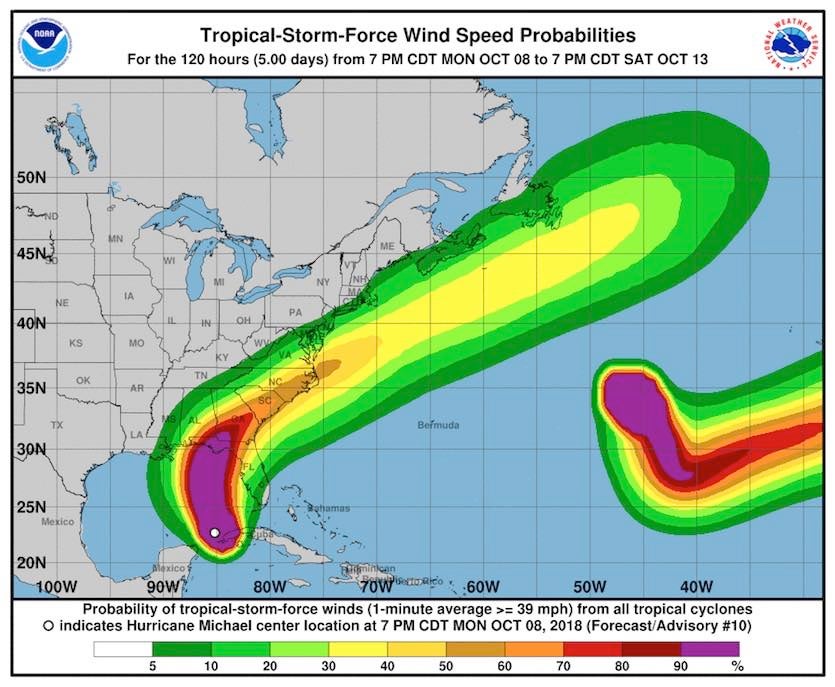 A storm surge warning is in effect from the Okaloosa/Walton County line in Florida to Anclote River, Florida. This means life-threatening storm surge inundation is a danger in the warning area within 36 hours.

Storm surge watches are in effect from Anclote River, Florida, to Anna Maria Island, Florida, including Tampa Bay, and from the Alabama/Florida border to the Okaloosa/Walton County line in Florida. This means life-threatening storm surge inundation is possible in the watch area within 48 hours.

A hurricane warning is posted for the Florida Gulf coast from the Alabama/Florida border to Suwanee River, Florida, including Pensacola, Panama City and Tallahassee. The hurricane warning also extends inland to southwestern Georgia, including Albany. Hurricane warnings are issued 36 hours before the anticipated arrival of tropical-storm-force winds (39-plus mph), which is when outside preparations become dangerous.

Tropical storm warnings are in effect from the Alabama/Florida border westward to the Mississippi/Alabama border and from Suwannee River, Florida, southward to Chassahowitzka, Florida. The tropical storm warning also extends inland to portions of southern Alabama and southwestern Georgia, including Mobile, Alabama, and Valdosta, Georgia. This means tropical storm conditions are expected somewhere within the warning area within 36 hours.

Tropical storm watches have been posted from Chassahowitzka, Florida, to Anna Maria Island, Florida, including Tampa Bay, from the Mississippi/Alabama border westward to the mouth of the Pearl River, and along parts of the Southeast coast from north of Jacksonville to near Charleston, South Carolina, including Savannah and Bruswick/St. Simons Island, Georgia. This means tropical storm-force conditions are possible within 48 hours.

Interests along the northeastern Gulf Coast in the path of Michael should be rushing preparations to completion. Follow the advice of local officials if you are ordered to evacuate, particularly if you live in a storm-surge-prone location. 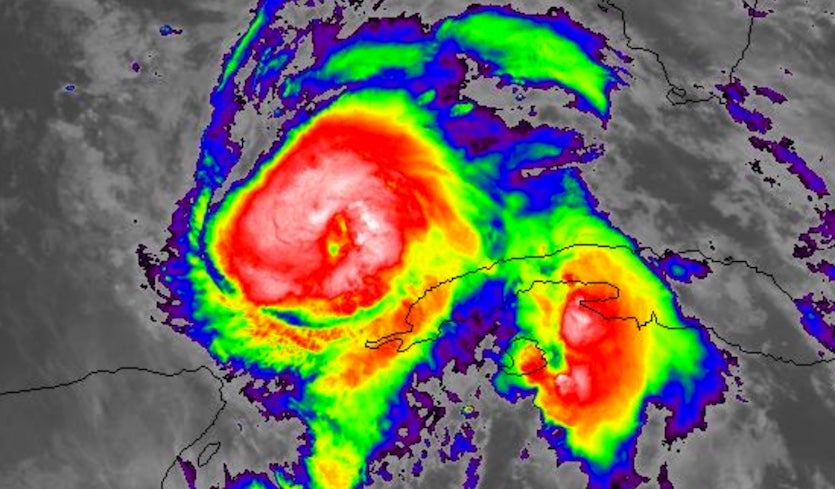 - Landfall is most likely to occur somewhere between the Florida Panhandle and the Big Bend of Florida a few hours either side of midday Wednesday.
- Conditions will begin to deteriorate as early as Tuesday evening on the northeastern Gulf Coast.
- After landfall, Michael will then accelerate inland across the southeastern U.S. Wednesday night through Thursday night with gusty winds and heavy rain.
- Michael could enhance rainfall in the mid-Atlantic and southeastern New England Thursday night and Friday.

- The NHC is forecasting Michael to be at least a Category 3 hurricane when it approaches the Florida Panhandle Wednesday.
- There remains some uncertainty in the intensity forecast, and Michael could be slightly weaker or stronger near landfall.
- Michael will still be a dangerous hurricane even if it does not intensify as much as currently forecast.

- Widespread power outages, major tree damage and structural damage will occur along the path of Michael near and just inland from where it makes landfall on the Florida Panhandle.
- Widespread power outages may extend into parts of south Georgia and far southeast Alabama, given Michael's faster movement.
- Winds capable of power outages and at least some tree damage may extend into parts of north Georgia and the Carolinas, as well. This is a particular concern in areas where soil is still saturated from Florence's torrential rain in the northeast South Carolina and North Carolina.
- One forecast model from the University of Michigan suggests there could be at least 2 million customers without power from Michael, from Florida to southeast Virginia.
- Metro areas that may experience power outages include: Tallahassee, Atlanta, Jacksonville, Columbia, Greenville-Spartanburg, Charleston, Charlotte and Raleigh-Durham.

Life-threatening storm surge flooding will occur along the immediate coastline near and east of where the center makes landfall. Michael is expected to affect portions of the Florida Gulf coast that are especially vulnerable to storm surge, particularly Apalachee Bay south of Tallahassee.

The NHC says water levels on the Gulf Coast could reach the following heights if the peak storm surge arrives at high tide:

Here are the high tides for Wednesday and Thursday for a few locations in the storm surge threat area along the Florida Gulf coast (all times are local):

On the southeastern U.S. coast, onshore winds and high astronomical tides will also lead to some coastal flooding this week.

Some coastal flooding will also occur as far west as the Texas coast, as was noted Monday on the Bolivar Peninsula and at S. Padre Island.

- Rainfall totals of 4 to 8 inches are forecast from the Florida Panhandle and Big Bend into southeastern Alabama and south Georgia, according to the NHC. Locally up to a foot of rain is possible. This may cause life-threatening flash flooding in some areas.
- Eastern Georgia, the Carolinas and southern Virginia may pick up 3 to 6 inches of rain, potentially triggering flash flooding. This will include some areas devastated by flooding from Hurricane Florence. That said, this system will move quickly, rather than stall like Florence did and will, therefore, not bring extreme rainfall amounts.
- The Florida Peninsula, eastern mid-Atlantic and southern New England coast may see 1 to 3 inches of rain.