Florence has rapidly intensified into a dangerous Category 4 hurricane, and appears destined to strengthen even further as it heads towards the Southeast U.S. Coast.

Florence is likely to make landfall on Thursday evening or Friday morning on the coast of North Carolina or South Carolina, and the odds continue to increase that Florence will stall on Friday and meander near or over the coast for several days, making the hurricane a devastating rainfall and coastal flooding threat. Update: at noon EDT, Florence was upgraded to Category 4 strength based on hurricane hunter data. Top sustained winds were near 130 mph, with the estimated central pressure down to 946 millibars, a full 15 mb lower than the estimate from 11 AM EDT.

Florence was about 580 miles south-southeast of Bermuda at 11 am EDT Monday morning, moving west at 13 mph. Sea surface temperatures (SSTs) were a warm 29°C (84°F), which is about 2°F above average. Florence was embedded in an atmosphere with dry air (a mid-level relative humidity of 50%). However, with wind shear a light 5 - 10 knots, the hurricane has successfully walled off this dry air, and is now minimally affected by it. Satellite images on Monday morning showed that the storm was significantly more organized, with a prominent eye, a more symmetrical shape, impressive spiral banding, and a strong upper-level outflow channel to the northeast. Florence was a medium-sized hurricane, with tropical storm-force winds that extended out up to 140 miles from the center. This was 25 miles farther than on Sunday morning.

There is no recent hurricane hunter data from the core of the storm, though the NOAA jet is currently engaged in a dropsonde mission to help out the 12Z cycle of models. These will come out between noon and 3 pm EDT today. A NOAA hurricane hunter aircraft will fly a research mission out of Bermuda late Monday morning, and regular hurricane hunter missions by the Air Force will begin on Monday evening. The NOAA jet will fly another dropsonde mission on Tuesday. Special balloon launches are being performed across much of the central and eastern U.S. over the next few days to double the frequency of upper air data for the models to crunch. In short, we should have steadily improving model forecasts of just where Florence will go.

View of Hurricane Florence from the International Space Station this morning. NASA

Intensity forecast for Florence: expect a Cat 4 by Tuesday

Florence’s environment is very conducive for intensification. The SHIPS model predicts shear will remain low through Wednesday night. SSTs will remain near 29°C (84°F) during this period, and ocean heat content will be high, near 35 - 50 kilojoules per square centimeter. Our top intensity models unanimously predict strengthening of Florence into a Category 4 hurricane by Wednesday, and the storm is also expected to increase in size. Florence will still be embedded in a relatively dry atmosphere, so it is possible the storm could suffer from dry air intrusions that would interfere with the intensification process, but this will likely not occur until Thursday, when wind shear is expected to increase to a moderate 10 – 15 knots.

The models continue to come into better agreement on the track and speed of Florence, and on Monday morning, all of the forecasts from our top five models agreed that Florence would hit North Carolina or South Carolina on Thursday evening or Friday morning. The exact location of Florence’s landfall is still fuzzy, as the average error in a 3-day and 4-day NHC forecasts are about 120 miles and 160 miles, respectively. While we do still have a few members of the GFS and European ensemble forecasts predicting that Florence will stall just off the coast and never make landfall, I put the odds of a Florence landfall on the U.S. East Coast at 90%.

Our top five models all agree that the trough of low pressure that was expected to turn the hurricane to the north late this week will be too weak to do so, as a strong ridge of high pressure builds over the Mid-Atlantic. This “blocking ridge” is likely to block Florence’s forward progress. Florence is expected to stall and wander near or over the coast for as many as four days, potentially becoming the “Harvey of the East Coast”, dumping prodigious amounts of rain. If a significant portion of the storm’s circulation remains over water, as occurred last year with Hurricane Harvey’s stall over Southeast Texas—or even if Florence were to move into the higher terrain of western North Carolina and then stall—the rain from Florence may break all-time state records for rainfall from a hurricane or tropical storm. North Carolina’s state rainfall record from a hurricane is 24.06” from Hurricane Floyd of 1999, South Carolina’s is 18.51” from Tropical Storm Jerry of 1995, and Virginia’s is 27.00” from Hurricane Camille of 1969. There is also the danger that Florence could make landfall, then emerge back over water and re-intensify, increasing its rainfall potential.

Total soil moisture anomaly (departure from the 1971-2010 average, in millimeters) for the period from August 28 to September 4, 2018. Moist soils over the Mid-Atlantic will increase the likelihood of flooding from Florence. NOAA

A soggy late summer has set the stage for major flood concerns. Much of the period since mid-July has been exceptionally wet over parts of the mid-Atlantic. The cities of Hatteras, NC; Washington, DC (Reagan and Dulles airports); and Wilkes-Barre and Williamsport, PA, had their wettest summers on record. For the week ending Tuesday, 4 September, soil moisture was running up to 100 millimeters (4 inches) above normal over large parts of the mid-Atlantic (see Figure 3). Preexisting saturated soils greatly exacerbate the risk of flooding, although they are not an absolute requirement. 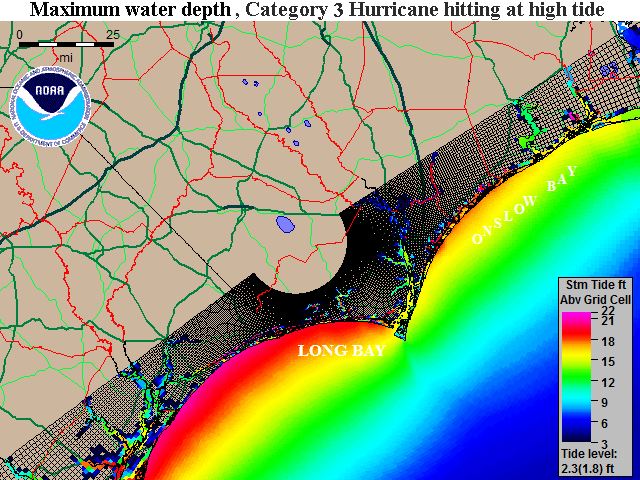 Maximum storm tide image for a composite maximum surge for a large suite of possible mid-strength Category 3 hurricanes (sustained winds of 120 mph) hitting at high tide (a tide level of 2.3) near the North Carolina/South Carolina border. What’s plotted here is the storm tide--the height above ground of the storm surge, plus an additional rise in case the storm hits at high tide. Empty brownish grid cells with no coloration show where no inundation is computed to occur. Inundation of 15 -22’ can occur in a worst-case scenario along most of the coast. Note that not all sections of the coast will experience this surge level simultaneously; the peak values would occur near and to the right of the storm's center where it makes landfall. NOAA

The South Carolina and North Carolina coasts are extremely vulnerable to high storm surges, due to the large area of shallow water offshore. Two of the three historical Category 4 hurricanes that have hit this region generated a storm tide 18 - 20 feet: Hugo of 1989 and Hazel of 1954. The other storm--Gracie of 1959--did not (it hit at low tide, significantly reducing the coastal flooding). The storm tide is the combination of the storm surge and the normal lunar tide, measured in height above sea level. The National Hurricane Center uses the terminology “height above ground level” when discussing the storm tide, meaning the height the surge (plus tide) gets above the normal high tide mark. If Florence is a Category 3 or 4 hurricane at landfall, it has the capability of generating a 20-foot surge along a 10 – 40 mile stretch of the coast where the right-hand eyewall comes ashore.

If you live in a hurricane-prone location, now is a good time to make sure you have a preparedness plan in place! Tropical storm-force winds may begin along the coast as early as Thursday morning, so be sure to have all your preparations done by then. If your are asked to evacuate for the storm surge, get out!