The boat was carrying 31 people when aggressive storms rolled over the area. The National Weather Service issued a severe storm warning at 6.30pm on Thursday, 30 minutes earlier. 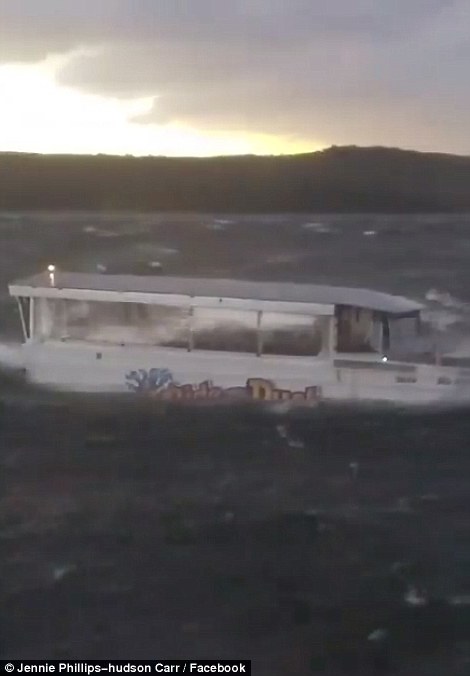 Shocking pictures show the boat being lashed by strong, massive waves for about five minutes before it became entirely submerged. 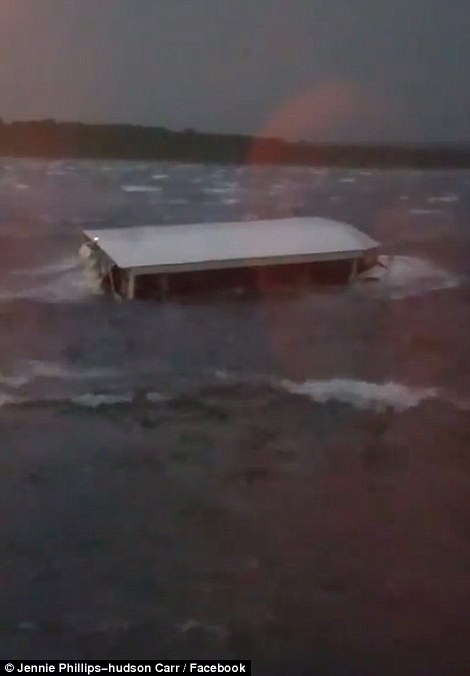 These pictures were taken by a passenger on another, sturdier boat nearby. Its crew tried to save the duck boat passengers but couldn't.

Four more bodies have been pulled from the water where a duck boat capsized on Thursday night, bringing the total death toll from the tragedy to 17.

All of the victims were on board the Ride the Ducks amphibious vessel when a powerful storm rolled over the lake, lashing the water with 60mph winds at around 7pm.

Fourteen people survived, including the boat's captain. Seven people were hospitalized with injuries.

Those who died range in age from one to 70. Among them was the boat's driver.

Search and rescue teams sectioned off part of the lake to continue their recovery of the four missing bodies on Friday morning.

The first 11 bodies were found on Thursday night and six more were recovered the next day.

The lake which is 229ft deep and has a surface area of 43,100 acres was partially reopened to the public on Friday morning.

Now, authorities must bring the boat wreckage back to the shore to investigate why it failed.

A severe storm warning was issued by local agencies at 6.30pm, 30 minutes before the boat got into trouble.

The tour departs every 30 minutes and costs $26 for an adult ticket.  According to a description on a tour website, the boat is only ever on the water for 25 minutes but is an hour long and also traverses land.

As it was overpowered with waves on Thursday night, passengers on other boats nearby watched helplessly. They filmed harrowing footage of the scene which cut out just before the boat capsized.

The initial death toll on Thursday night was 11.  On Friday morning, authorities resumed their search for the six people who were missing and pulled two more bodies from the water.

The incident is being described by police as a 'mass casualty'. None of the victims have been identified.

At a press conference in Branson on Friday, Governor Mike Parson said the reason for the tragedy remained unclear.

Neither he nor local sheriffs know whether the boat operators checked the weather forecast before taking to the water.

'Needless to say the things that have occurred in the last 24 hours, it is a sad occasion with a lot of families involved,' Governor Parson said.

Some of the victims were on vacation in Missouri from other states.

Authorities are now trying to contact all of the victims' families.

There were life jackets on the boat but it is not clear if they were accessed before the vessel went down.

The boat's captain survived but its driver was among those who died.

Passengers and crew on a nearby boat, the Branson Belle, watched from the shore as the smaller boat got into trouble.

Among them was an off-duty sheriff's deputy who leaped into the water to rescue some of the passengers on the duck boat. 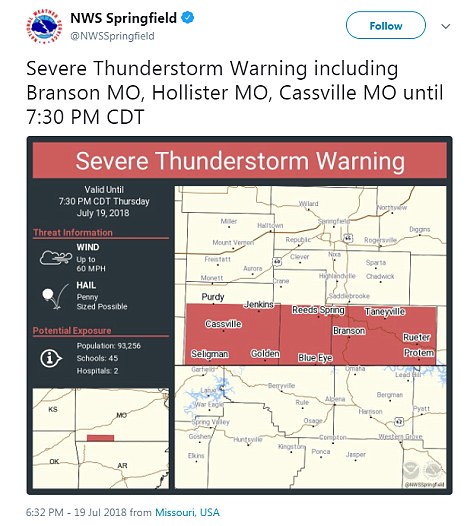 The National Weather Service in Springfield issued this severe thunderstorm warning at 6.32pm, just 30 minutes before the boat got into trouble on the water. It remains unclear if the boat was already on the water by the time it was issued.

Other passengers and the boat's crew also tried to help while others filmed videos from the windows, helplessly watching as the duck boat went under.

Jennie Carr was one of them. She captured harrowing footage of waves crashing over the duck boat until it vanished beneath water.

'You could see it (the storm) approaching... We looked to our left and that’s when we seen the duck, then we seen another one coming.

'The one that sunk was having trouble, it couldn't go very fast. The waves went over the top of it.

‘I videoed it as much as I could for as long as I could until it went round the showboat and that's where it sank,' she told Today on Friday morning.

‘First we really didn't realize that it had sunk then when all the crew started running and the captain was giving orders to all the crew to get the life vests and to get out there and help them, we cried a little bit. I went to the window and I prayed and I cried. There wasn’t nothing you could do.

‘I’m sad and I want to help but I can’t help. I don’t know what to do. It was really sad that I knew some of these people wouldn’t get to go home.’

Due to a lack of light, divers wrapped up the operation about midnight and headed back to shore.

A top wind speed of 63mph was measured at 7pm, when the boat was on the water.

National Weather Service meteorologist Steve Linderberg said the winds were likely stronger over the lake, adding: 'There’s nothing to slow down winds in an open area'.

Suzanne Smagala, of Ripley Entertainment, which owns Ride the Ducks in Branson, said the company was assisting authorities with the rescue effort.

She added this was the Branson tour's first accident in more than 40 years of operation.

Duck amphibious vehicles have been involved in a number fatal accidents around the world in the past two decades, with some sinking or being swamped or others colliding with vehicles.

The vehicles have been involved in other deadly incidents in the past.

They include one in 2015 in Seattle in which five college students were killed when a boat collided with a bus, and one in 1999 that left 13 dead after a boat sank near Hot Springs, Arkansas.

Safety advocates have sought improvements to the boats since the Arkansas incident. Critics argued that part of the problem is numerous agencies regulate the boats with varying safety requirements.