Five People Are Burned Alive in Their Cars in California Wildfires as 150,000 Are Forced to Evacuate

Many more people are missing and multiple wildfires across California are threatening to destroy thousands of homes.

Five people have been burned alive in their cars by a wildfire in Northern California while officials warn that two other blazes ravaging the southern part of the state are zero percent contained, threatening to destroy thousands of homes.

The notorious Santa Ana winds are expected to continue fueling the three fast-moving wildfires as they tear across large swaths of the coastal state. Over 240,000 have been evacuated across the state.

In Northern California, the Camp Fire has raced across 70,000 acres since starting on Thursday morning, destroying 2,000 structures and killing at least five people who had no time to escape.

That fire has devastated the town of Paradise, where officials say nearly every structure has been razed by out-of-control flames and five people were found dead in burned out vehicles early Friday afternoon. The Camp Fire is 5 per cent contained.

In Southern California, nearly 150,000 people are under evacuation orders as a pair of life-threatening fires have overtaken nearly 20,000 acres, with dry winds of up to 70mph push them westward toward the Pacific Ocean.

The larger of the two southern blazes, the Woolsey Fire, has already scorched as least 14,000 acres north of Los Angeles since igniting near Rocketdyne at around 2pm local time Thursday, quickly spreading southwest toward Newbury Park and Thousand Oaks, the community still reeling from a mass shooting on Wednesday night.

To the west of the Woolsey Fire a second, smaller blaze dubbed the Hill Fire has torched almost 6,000 acres in Ventura County after igniting at around the same time in Hill Canyon Thursday afternoon.

Both fires are 0 per cent contained as of 11am on Friday, and dozens of communities on the border of Ventura and Los Angeles counties as well as the beachside city of Malibu have been ordered to evacuate as the flames approach. 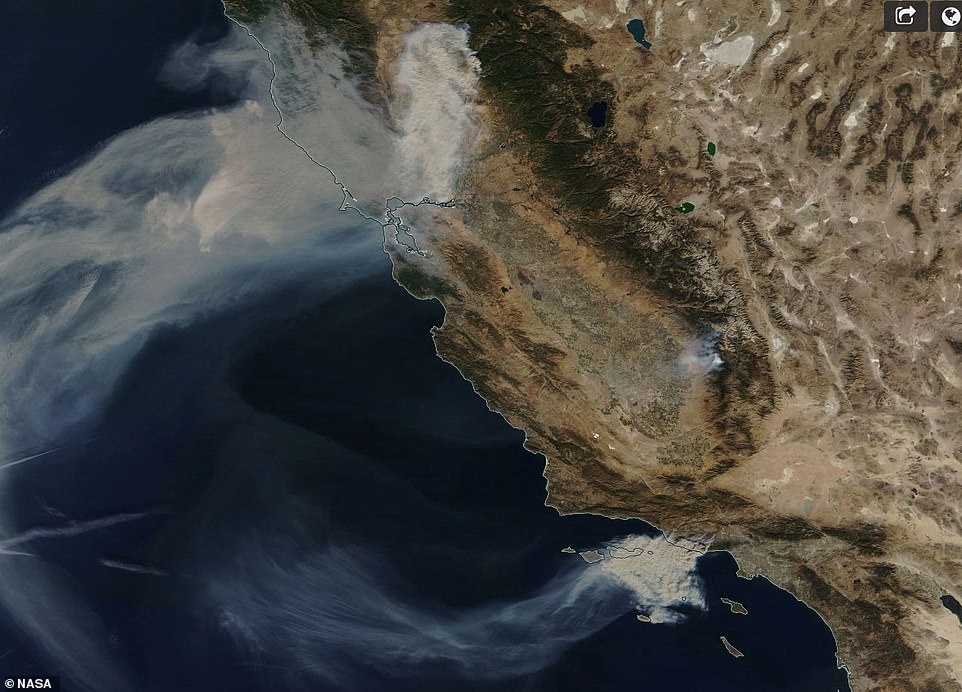 Three wildfires are seen burning in California on Friday. The larger Camp Fire in the north has killed five and destroyed the town of Paradise. In the south, near Los Angeles the twin Hill and Woolsey Fires have forced an evacuation of Malibu. NASA

The causes of all three fires are under investigation. The Camp Fire began at 6.29am on Friday, while in the south the Hill and Woolsey Fires began at

Over 2,500 fire personnel are fighting the three blazes on the ground as challenging fire conditions are expected to continue through the weekend.

In Southern California, wind alerts and red flag warnings have been issued, warning wind gusts could reach 70mph and relative humidity could be as low as 2 percent.

No injuries have been reported in either southern fire as of Friday morning, but officials have warned that they will remain life-threatening through the weekend.

At around 7am local time Friday, officials issued a mandatory evacuation order for the entire city of Malibu as the Woolsey Fire raged toward the Pacific Ocean.

The Woolsey fire jumped US Highway 101 in the Calabasas area overnight and is now continuing it's path into the Santa Monica Mountains.

Celebrities including Kim Kardashian and Kanye West, Rainn Wilson, and Alyssa Milano have been forced to evacuate as the flames surrounded their homes.

West's offices in Calabasas also had to be evacuated after the raging wildfire encroached on the area.

In Agoura Hills, the Woolsey Fire destroyed Paramount Ranch, the set of HBO's Westworld and many other western films and shows.

HBO said that no cast or crew were at the Paramount Ranch location when it burned down.

Among the films that have been shot at the ranch are Caught in the Draft with Bob Hope, The Lake House with Sandra Bullock, and TV shows including The Mentalist, Weeds and Quickdraw.

The Southern California fires are flanking the city of Thousand Oaks, threatening the beleaguered community as it tries to mend itself after a gunman stormed a bar holding 'College Night' on Wednesday, killing 11 people and himself.

Smoke from the Hill Fire could be seen over the area where a vigil was held last night for the victims of the shooting at the Borderline Bar and Grill less than 24 hours earlier.

The Thousand Oaks Teen Center that was used as meeting point after the massacre has now been transformed into a shelter from the fire.

The fire has been spread by powerful winds that pushed it through canyons and to the edge of Camarillo Springs and Cal State Channel Islands, both of which were evacuated.

More than 165 firefighters were rushed to the area and eight aerial air tankers have been ordered to tackle the fierce blaze from above.

A 'red flag' warning came into effect at 10am today in the San Diego County mountains and valleys and will last until 10pm Friday.

In nearby Newbury Park where ex-marine Ian Michael Long lived, residents stood and watched two scenes unfolding - one of reporters standing outside of home of the suspected shooter, the other a brush fire raging behind their homes.

Connor Chaney, 21, told the LA Times: 'You feel hopeless. There's nothing you can do over there or there.'

This morning the flames were said to be only three miles from the Borderline Bar and Grill.

The Hill Fire is burning in the same area as the Springs Fire from 2013, according to the Ventura County Fire Department.

'The wind is definitely pushing this thing toward the ocean just like the Springs Fire a few years ago,' Ventura County Fire Capt Brian McGrath told the Los Angeles Times. 'It's very fast.'

On Friday officials confirmed that five people had been found dead in their vehicles after having been burnt alive by ferocious flames in Northern California's Camp Fire.

In the northern part of the state, the town of Paradise has been ‘pretty much destroyed’ by a raging wildfire that forced some 27,000 terrified residents to flee their homes.

All of the city’s 27,000 residents were ordered to evacuate on Thursday as the wildfire quickly turned into an inferno. Many residents said traffic jams developed as they left as panicked people fled, some abandoning their cars to try to escape on foot.

Evacuees were seen clutching babies and pets as they abandoned vehicles and struck out on foot ahead of the blaze that engulfed the town, destroying hundreds of buildings and causing highway pylons to collapse into roads.

One witness Gina Oviedo described a devastating scene as she fled the town as the flames took over, saying: 'Things started exploding. People started getting out of their vehicles and running.'

A red flag warning was in effect from Friday morning, meaning firefighters face a battle against the high dry winds and low humidity that help spread the wildfire.

On Thursday night fire officials said the blaze was 'growing uncontrollably' as it swept across Butte County at a rate of about 80 football fields per minute, and more than 2,200 firefighters fought against the flames.

Cal Fire Capt Scott McLean late last night: 'Pretty much the community of Paradise is destroyed, it's that kind of devastation. The wind that was predicted came and just wiped it out.'

McLean says a wind-whipped wildfire destroyed thousands of structures but he said they won't have an exact count, nor have an idea over the extent of any injuries until they can get into the dangerous area.

While officials say there have likely been a number of fatalities from the rapidly expanding Camp Fire, no official number has been reported.

Meanwhile, families in search of missing loved ones have received aid from an unlikely source: actor James Woods.

The award-winning actor has filled his Twitter page -@RealJamesWoods - with retweets of nearly 20 posts from relatives pleading for information about their missing loved ones.

Woods tweeted: 'To all my wonderful followers: I want to thank you for your extraordinary efforts tonight connecting people with lost loved ones in the terrible #CampFire. Your thousands of retweets of invaluable information literally saved lives. God bless you all.'

At the top of the profile Woods pinned a link to a running list of missing persons, which stood at a total of 40 as of 10am PST Friday morning.

The award-winning actor has retweeted nearly 20 posts from relatives pleading for information about loved ones.

List of those missing from #CampFireEvacuations Very big list of #MissingPersons. Rather than do each one as a separate tweet, I implore you to scan this list and see if you recognize these missing persons👇 #CampFire #CampFireJamesWoods https://t.co/9ZodY6Vf9v

Still missing. Elaine Sims, please contact me if you have seen her! 240-328-3272#campfirejameswoods pic.twitter.com/h439CWUYPg

My Father, ROBERT MISIPPO, is a disabled Veteran living at 14779 DENISE DR. in Magalia. We are unable to reach him via phone or otherwise. We are extremely worried and hoping a neighbor or law enforcement reached him @RealJamesWoods @ButteSheriff #CampFireJamesWoods pic.twitter.com/gsZOlcafza


Found!!!!! Oh, this is wonderful. Thank you so very much for your kind words. The true effort came from all my followers who pitched in and spread the word for So many missing loved ones today. Good things happen when we all work together.#CampFire #CampFireJamesWoods https://t.co/ND2w3Vcuk6