ENERGY CRISIS: New England Is At Risk Of Blackouts This Winter as Gas Supplies Tighten

The region’s power-grid operator has warned that an extremely cold winter could strain the reliability of the grid and result in rolling blackouts.

New England, a region home to six states that are deeply Democratic, may experience rolling blackouts this winter due to severe natural gas shortages, according to The Wall Street Journal.

The region is heavily reliant on imported liquefied natural gas (LNG) to supply energy during the winter months; however, New England may be unable to get enough gas as Europe is importing record amounts of LNG to combat its energy crisis, the outlet reported. Should LNG supplies dwindle during a harsh winter states like Massachusetts and Connecticut could struggle to generate electricity as a substantial amount of fuel supply will be used to heat homes, according to the region’s grid operator Independent Systems Operator New England (ISO NE).

“The Northeast grid relies heavily on natural gas, including imported LNG from many areas of the world which is delivered just in time,” Meredith Angwin, author of “Shorting the Grid: The Hidden Fragility of Our Electric Grid,” told the Daily Caller News Foundation. “Our dependence on these fuels leads to increased danger of rolling blackouts in cold weather conditions.”

Although New England states are located near the Appalachian and Marcellus shale natural gas basins, pipeline projects that could alleviate supply concerns have been previously blocked by states like New York and environmental groups.

“Since the region is reliant on imported liquefied natural gas (LNG) during the winter months, we can expect to see price volatility when global events impact demand for this fuel,” an ISO NE spokesperson told the DCNF. 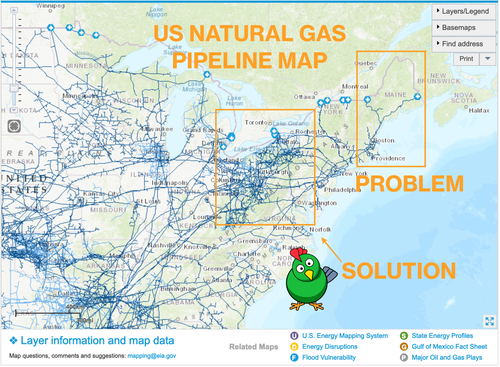 All of this has led to New England residents facing some of the highest electricity bills in years. Heating season is already underway.

New England’s electricity companies cannot stockpile large amounts of fuel and are unable to secure enough gas via pipelines as the majority of supplies are routed to utilities that heat households and businesses, according to the WSJ. Power producers largely rely on fluctuating market prices to meet demand; however, natural gas prices are set to rise this winter, according to the Energy Information Administration.

“I don’t think we will address the reliability concerns in time for winter, we just have to hope for a mild winter,” Angwin said.

Europe is set to import a record amount of LNG in 2022 as its imports through the end of September are already 16.5% higher than 2021’s total and 8% over 2019’s pre-COVID numbers, according to Reuters which cited Refinitiv, a financial analyst. Europe is receiving increased shipments of LNG as Russia has cut natural gas deliveries via the Nord Stream 1 pipeline in response to sanctions.

Natural gas accounts for 52% of New England’s electricity generation while 11% of the region’s power comes from net imports, according to ISO NE data.

“Our initial analysis shows that the region should have sufficient fuel supplies under mild and moderate winter conditions, which in New England is quite cold,” an ISO spokesperson told the DCNF.