Deadly tornadoes kill at least one, leave dozens injured and destroy more than 50 homes as they rip through three states after high fall temperatures - and 10 MILLION are on alert for MORE

Millions of people across the southern Plains are on high alert of more tornadoes, hail and severe storms.

Tornadoes tore through parts of three different states on Friday, killing one 90-year-old man, injuring two dozen others and leaving many of homes and buildings in ruins.

Multiple people also are missing in McCurtain County, Oklahoma, where the only death has been recorded.

Oklahoma, Texas and Mississippi are feeling the brunt of the devastating tornadoes, but warnings have been reported in Missouri and Mississippi, with another storm system heading to Louisiana.

The National Weather Service Storm Prediction Center showed nine tornadoes that had formed in Texas, four in Arkansas and one in Oklahoma.

Cody McDaniel, emergency manager for McCurtain County, confirmed one death and that there are 'multiple missing people.'

More than 90,000 homes and businesses were without power across Arkansas, Louisiana, southeastern Oklahoma and eastern Texas as of early Saturday, according to Poweroutage.us.

The severe weather forced the cancellation of almost 400 flights in the Dallas area. 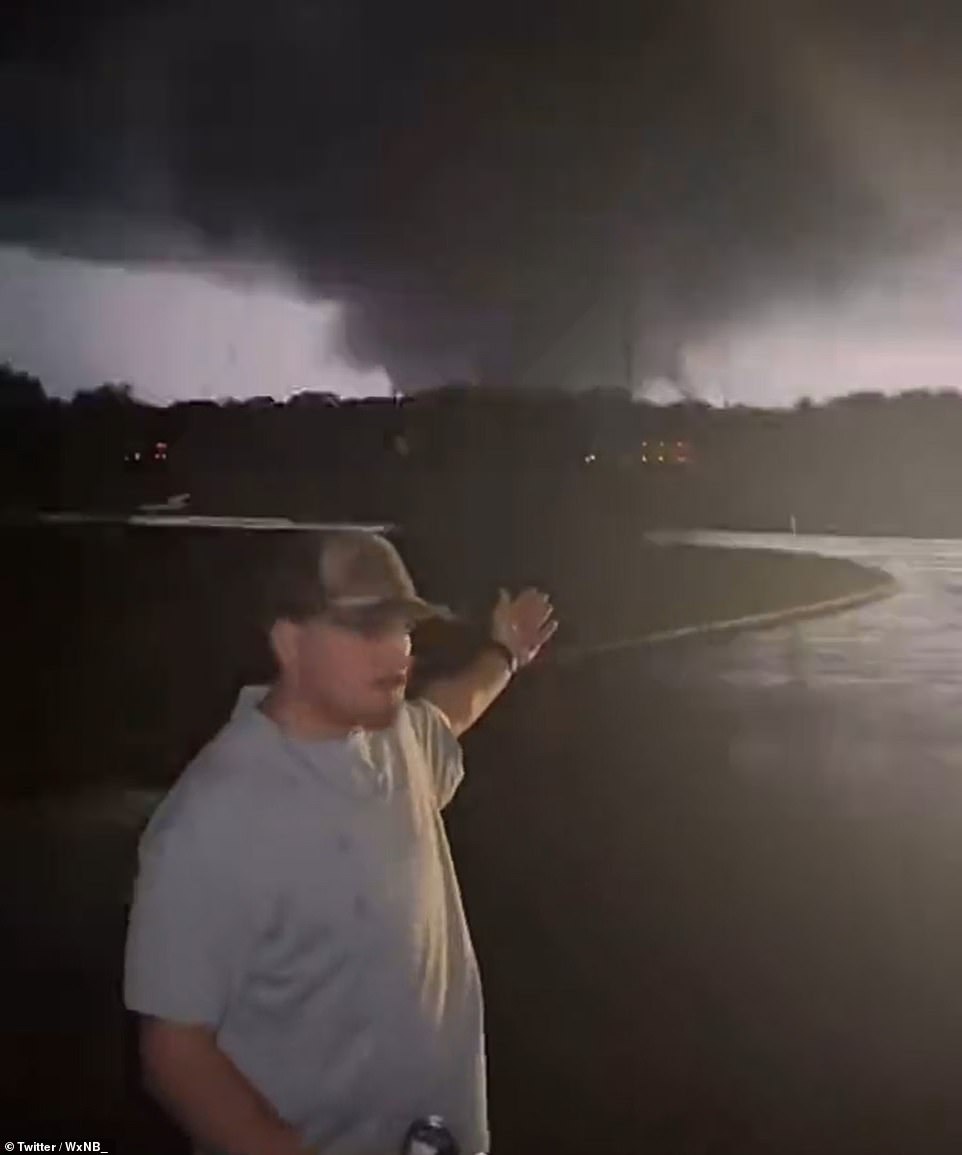 One man was able to capture the enormity of the tornado as lighting made it visible. 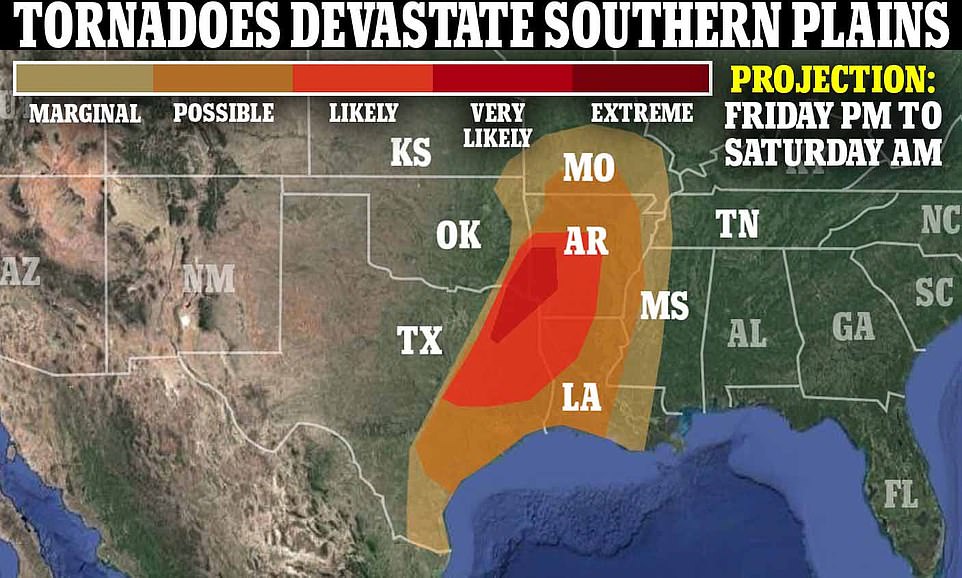 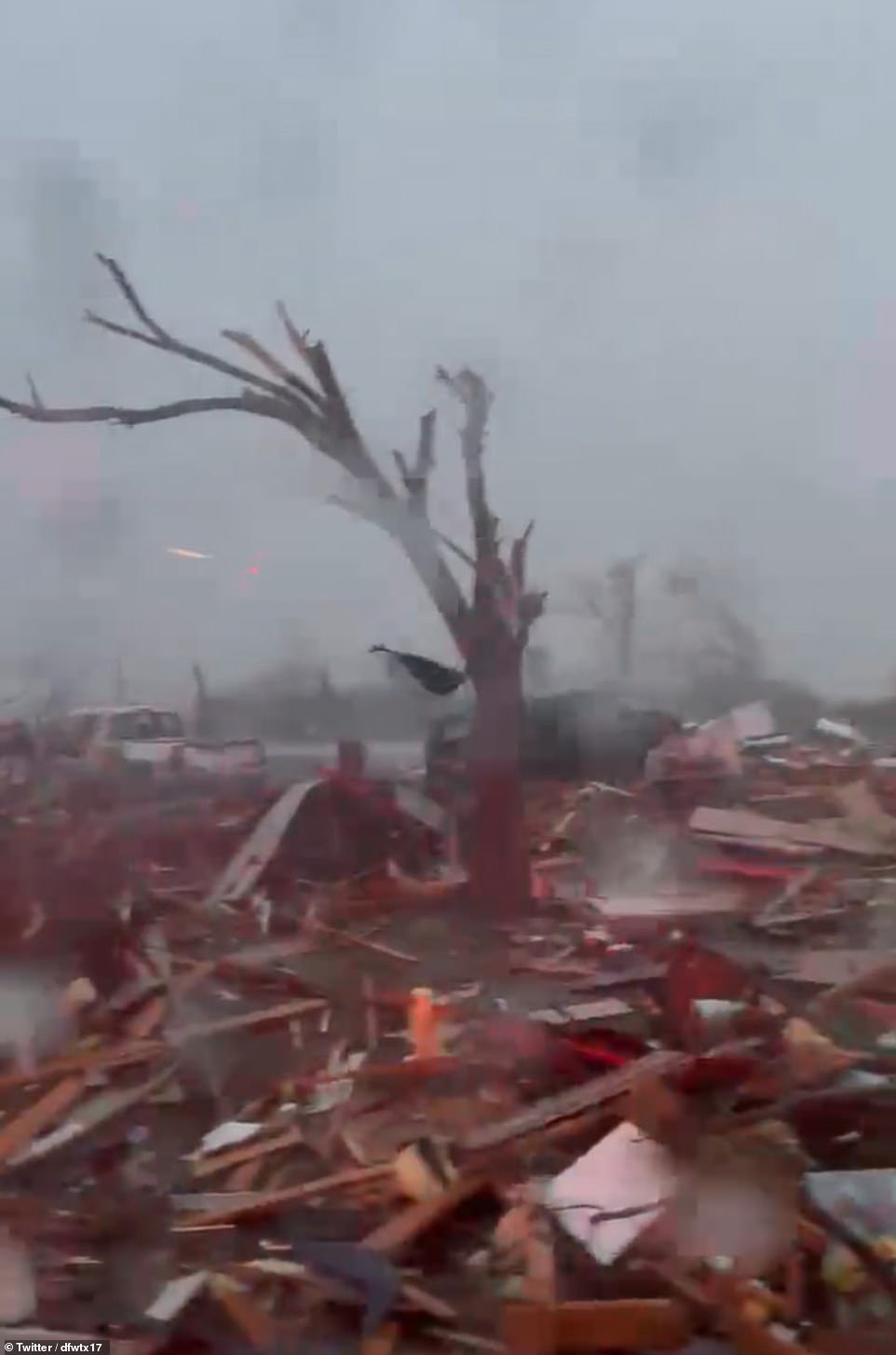 One Twitter user was able to film the sheer destruction that had been left in the storm's wake.

Officials did not yet have official details on any injuries or deaths because authorities were still trying to check on people and homes.

The small town of Idabel, Oklahoma saw a church, medical center and a school torn apart.

'There was total destruction on the south and east sides of Idabel,' Steven Carter, an emergency management coordinator for McCurtain County said. He added that people were still trapped late on Friday.

Oklahoma Governor Kevin Stitt said search-and-rescue teams and generators were being sent to the Idabel area, and wished 'thoughts and prayers' to the family of the man who was killed.

Keli Cain of the Oklahoma Emergency Management Office said at least three other counties were also hit by storms, with flash flooding in some areas.

Another hard-hit community was Powderly, Texas, near the border of Oklahoma, and about 120 miles northeast of Dallas.

Millions of people across the southern Plains remain on high alert for threats of more tornadoes, hail and severe storms.

Hail the size of a quarter was reported to be falling from the sky as the tornados tore through. 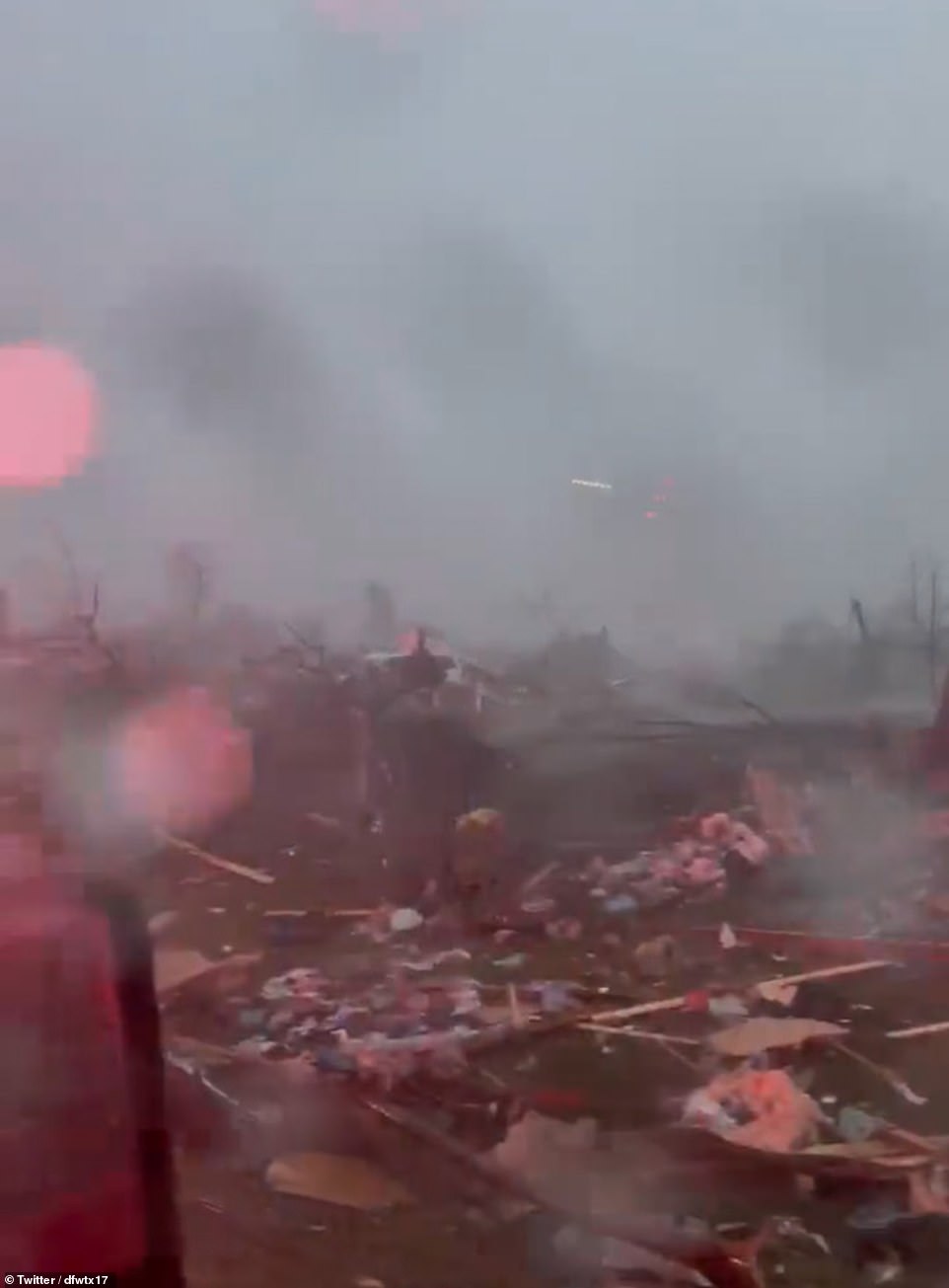 Very little remained of a neighborhood in the small town of Powderly, Texas. 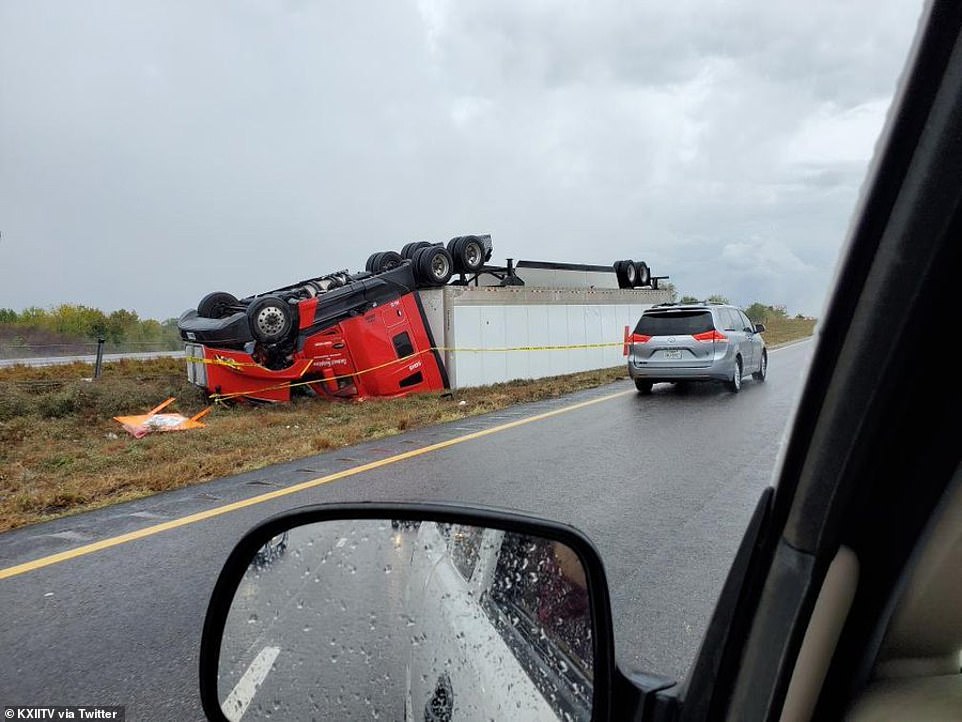 Injuries included a​ truck driver who was taken to the hospital when his semi blew over near the Oklahoma-Texas border.

Randi Johnson, chief of the Powderly Volunteer Fire Department, told The Paris News newspaper that she wasn't aware anyone had been killed but knew of injuries.

They included a​ truck driver who was taken to the hospital when his semi blew over and a person who was hit by a falling tree as she tried to get to a shelter.

'It's going to take a long time to get this cleaned up, but the community came together,' Johnson said. 'It's really heartbreaking to see.'

In Texas' Lamar County Judge Brandon Bell - the highest elected official in the county that includes Powderly - declared a disaster in the area, a step in getting federal assistance and funding.

Bell's declaration said at least two dozen people were injured across the county in what he said was a confirmed tornado.

The Lamar County Sheriff's Office and Emergency Management said that 10 injured people had been treated at an area hospital, and two of those people had critical injuries.

The Sheriff's Office said the tornado touched down shortly after 4pm and traveled north-northeast through the communities of Hopewell, Caviness, Beaver Creek and Powderly. It said about 50 homes had been damaged or destroyed.