China's President Xi Jinping Warns of 'Grave Situation' as Killer Coronavirus Accelerates, Doctor Dies and US Evacuates its Citizens From Hotspot Wuhan After Death Toll Jumps to 42 With 1,372 Cases and 56 Million on Lockdown

The Wuhan coronavirus has now infected more than 1,400 people around the world with most cases in China.

The deadly coronavirus is 'accelerating' and China is facing a 'grave situation', the country's president has said - as at least one doctor has died from the virus and the US prepares to evacuate citizens from crisis-hit Wuhan.

The virus-hit Chinese city of Wuhan, already on lockdown and where the virus is thought to have originated, banned most vehicle use downtown and Hong Kong said it would close schools for two weeks as authorities scramble to stop the spread of an illness that has infected more than 1,400 people worldwide and killed 42.

Chinese President Xi Jinping spoke following an emergency government meeting to warn that the spread of the killer virus is worsening, as video emerged showing medics collapsing at hospitals in the capital of central China's Hubei province as the coronavirus outbreak continues to move across the world.

As of 8 pm local time (1200 GMT) on Saturday, the death toll in China had risen to 42, authorities reported. Some 1,372 people in China had been infected with the virus - traced to a seafood market in Wuhan that was illegally selling wildlife.

The virus has also been detected in Thailand, Vietnam, Singapore, Japan, South Korea, Taiwan, Nepal, and the United States.

'Faced with the grave situation of an accelerating spread of the new coronavirus [...] it is necessary to strengthen the centralised and unified leadership of the Party Central Committee,' Xi said, according to official news agency Xinhua.

It comes as Liang Wudong, 62, who had been treating patients in Wuhan, died from the virus this morning, state-run China Global Television Network reported.

Wudong, who was retired but drafted in to help with the outbreak, died after time spent treating patients. It was also reported that another doctor, Jiang Jijun, has died from a heart attack while treating the afflicted.

It is unknown if the infectious disease specialist, who has treated bird flu and influenza A and tuberculosis over the years, died as a result of coronavirus or from exhaustion.

And the US, which has around 1,000 citizens in the city, is set to evacuate those it knows about - including diplomats - on a 230 seater charter flight tomorrow.

The US government won approval for the operation from China's Foreign Ministry and other government agencies following negotiations in recent days, The Wall Street Journal reports. The British Foreign Ministry is yet to confirm whether it will do the same.

Also today, distressing video has emerged showing a doctor collapsing on the floor as footage revealed the full scale of panic inside Wuhan hospitals, with crowded corridors and patients slumped on the floor.

Video shows staff shouting at patients to calm themselves as medics desperately try to contain the situation. Some workers are reported to be wearing diapers as they don't have time to use the toilet amid the panic.

Some 56 million people are now subject to restrictions on their movement as authorities expand travel bans in central Hubei province, now affecting 18 cities.

Other shocking developments in the outbreak today include: 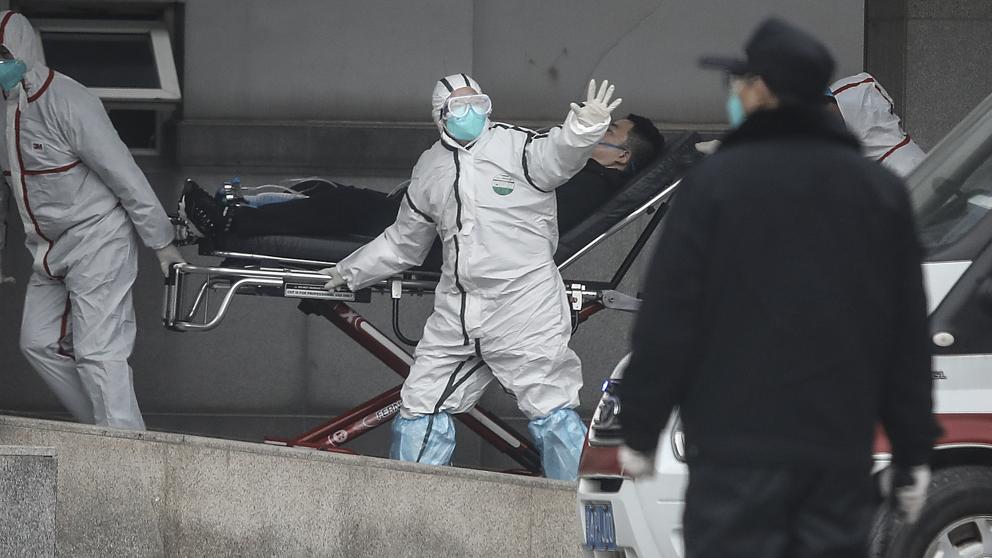 China's president Xi Jinping has warned the virus is accelerating as Chinese cities remains on lock down. A patient is pictured above being rushed to Red Cross hospital in Wuhan today. People have been pictured lying in the street after collapsing.

Hong Kong leader Carrie Lam has declared a virus emergency in the Asian financial hub, announcing a package of measures to limit the city's links with mainland China.

Schools, now on Lunar New Year holidays, would remain shut until February 17, while inbound and outbound flights and high speed rail trips between Hong Kong and Wuhan would be halted.

China's National Health Commission has announced it had formed six medical teams totalling 1,230 medical staff to help Wuhan. Three of the six teams, from Shanghai, Guangdong and military hospitals have arrived in Wuhan.

China will suspend both domestic and overseas Chinese group tours, state media reported today, as it ramps up efforts to contain the new SARS-like virus.

Starting on Monday, all overseas group tour services, including hotel and plane ticket bookings, from Chinese travel agencies will be suspended, according to state broadcaster CCTV. Domestic tour groups were suspended from Friday, it said.

Wuhan, a city of 11 million, has been in virtual lockdown since Thursday, with nearly all flights at the airport cancelled and checkpoints blocking the main roads leading out of town. Authorities have since imposed transport restrictions on nearly all of Hubei province, which has a population of 59 million.

The number of confirmed cases in China stands at 1,287, the National Health Commission said today.

U.S. coffee chain Starbucks said on Saturday that it was closing all its outlets in Hubei province for the week-long Lunar New Year holiday, following a similar move by McDonald's in five Hubei cities.

Yum China Holdings Inc said it has temporarily closed some of its KFC and Pizza Hut stores in Wuhan in response to the coronavirus outbreak in the Chinese city.

'We will continue to evaluate the need for additional actions and preventive health measures,' Yum China said in an emailed statement.

Australia on Saturday announced its first case of coronavirus, a Chinese national in his 50s, who had been in Wuhan and arrived from China on Jan. 19 on a flight from Guangzhou. He is in stable condition in a Melbourne hospital.

'Given the number of cases that have been found outside of China and the significant traffic from Wuhan city in the past to Australia, it was not unexpected that we would get some cases,' Australia's Chief Medical Officer Brendan Murphy told a news conference.

'This is the first confirmed case. There are other cases being tested each day, many of them are negative, but I wouldn't be surprised if we had further confirmed cases.'

The Centers for Disease Control and Prevention (CDC) is closely monitoring an outbreak caused by a novel (new) coronavirus first identified in Wuhan, Hubei Province, China. Chinese authorities identified the new coronavirus, which has resulted in close to 300 confirmed cases in China, including cases outside Wuhan, with additional cases being identified in a growing number of countries internationally. The first case in the United States was announced on January 21, 2020.

The U.S. Centers for Disease Control and Prevention said on Friday it had 63 patients under investigation, with two confirmed cases, both in people who had travelled to Wuhan.

The World Health Organization (WHO) declared the new coronavirus an 'emergency in China' this week but stopped short of declaring it of international concern.

Human-to-human transmission has been observed in the virus.

Hubei province, where authorities are rushing to build a 1,000 bed hospital in six days to treat patients, announced on Saturday that there were 658 patients affected by the virus in treatment, 57 of whom were critically ill.

The newly-identified coronavirus has created alarm because there are still many unknowns surrounding it, such as how dangerous it is and how easily it spreads between people. It can cause pneumonia, which has been deadly in some cases.

Symptoms include fever, difficulty breathing and coughing. Most of the fatalities have been in elderly patients, many with pre-existing conditions, the WHO said.

It comes as residents of the Chinese city at the centre of the country's coronavirus crisis fear they are 'trapped' and will all be infected because of the government lockdown which has stopped anyone from leaving.

Authorities yesterday scrambled to shut tourist attractions and public transport systems in 14 cities in a bid to stop the spread of the deadly new coronavirus that has killed at least 41 people and infected more than 1,200.

In a drastic turn of events, part of the Great Wall of China and Disneyland in Shanghai were closed yesterday as authorities desperately try to stop people spreading the Wuhan coronavirus.

Thirteen cities, home to around 40million people, are reported to have followed Wuhan's example and gone into some form of lockdown in the past 24 hours with public transport halted and roads closed.

A man living in Wuhan yesterday told MailOnline people there are 'all trapped' and and he fears he and his family will become infected if they aren't allowed to leave the city.

WHAT ARE THE SYMPTOMS OF THE CORONAVIRUS?

Once someone has caught the virus it may take between two and 14 days for them to show any symptoms.

If and when they do, typical signs include:

The vast majority of patients – at least 97 per cent, based on available data – will recover from these without any issues or medical help.

In a small group of patients, who seem mainly to be the elderly or those with long-term illnesses, it can lead to pneumonia.

Pneumonia is an infection in which the insides of the lungs swell up and fill with fluid. It makes it increasingly difficult to breathe and, if left untreated, can be fatal and suffocate people.

*For more information about the current outbreak in China: https://www.cdc.gov/coronavirus/novel-coronavirus-2019.html

**For more information about how to protect yourself: