Can we get out of Dodge? The big U.S. cities least prepared for an evacuation REVEALED. Chicago, L.A. and Atlanta have NO PLAN for getting the carless, kids and elderly out during floods, wildfires and storms, urban planners warn

Unaccompanied children, the poor, elderly, homeless, and tourists and those without cars struggle most to get out of a city.

Major cities like Atlanta, Chicago and Los Angeles are not prepared for storms, floods wildfires and other disasters and will struggle to evacuate people from an incoming weather hazard, researchers say.

Experts at Florida Atlantic University say many mayors are ignoring the lessons from Hurricane Katrina, super storm Sandy and other urban tragedies and urge residents of ill-prepared cities to devise their own exit strategies.

Topping the list of shame are Detroit, Las Vegas, Minneapolis, Atlanta, Chicago and L.A., which either have no evacuation strategy or have a 'secret plan', which experts say does little to help folks in a hurry.

‘To the mayors of these cities, I say there’s no excuse not to have a plan, and there are federal resources available to help you put one together,’ Renee stated. 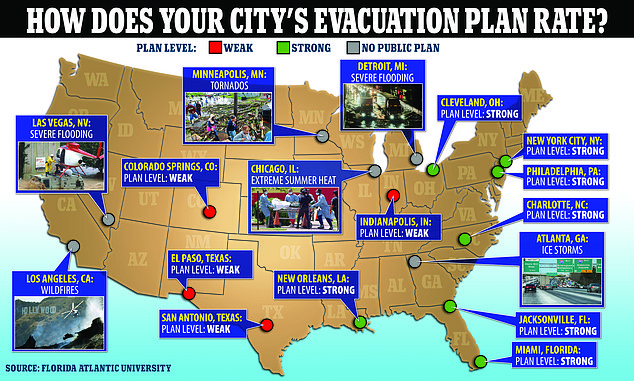 ‘People living in those cities need to demand more of their officials, and have their own personal plan, especially if they look out for an elderly parent or somebody else who can't drive.’

Contrary to the classic evacuation scene of gridlocked highways in many disaster movies, Renne says motorists can typically navigate their way to safety given notice of a coming hurricane.

‘Of course, that doesn’t mean it’s going to be easy and there won’t be traffic,’ he added.

He focuses on the estimated 25 percent of city dwellers who would otherwise be left behind — the poor, elderly, carless, unaccompanied children, homeless, tourists, and those with certain conditions, like blindness.

He evaluated the plans — or lack of them — in America’s 50 biggest cities released between 2010 and the onset of the Covid-19 pandemic.

Cities were scored on whether officials kept records of people with special needs, had specialized vehicles and arranged pick-up points, or had a plan for evacuating throngs of pedestrians — as was required in New York after the 9/11 attacks.

Seven ‘model’ cities were ranked as having strong plans — Charlotte, North Carolina, Cleveland, Jacksonville, Miami, New Orleans, New York, and Philadelphia — some of which learned from errors from past disasters.

The study, published in the International Journal of Disaster Risk Reduction, said there was a widespread ‘lack of preparedness’ and ‘only marginal improvements’ since Hurricane Katrina devastated New Orleans in 2005.

That storm left 80 percent of the Louisiana city underwater, displaced 130,000 residents, claimed 1,500 lives and mushroomed into a political embarrassment for the White House and emergency chiefs for a slow and confused response.

Many of today’s cities with weak or non-existent plans may suffer from ‘complacency’, as they often had little history of flooding, wildfires and hurricanes, said Renee. Still, climate change is shifting the calculus. Unaccompanied children, the poor, elderly, homeless, and tourists and those without cars struggle most to get out of a city.

‘We’re seeing wildfires pop up in places that we would have never expected. All of a sudden, we’re going from droughts to flooding overnight,’ said Renee, an author of more than 100 research papers.

‘Disasters now could happen anywhere, anyplace, anytime because of the unpredictable patterns in our weather.’

His report was released at the start of an unusually quiet Atlantic hurricane season, with not a single storm since the start of July. Even so, forecasters predict that the season overall will have above average storms and rainfall.

The Red Cross this month warned of ‘more frequent and intense weather events’ and urged Americans to prepare for the worst. Last year, 40 percent of the country — some 130 million people — lived in counties struck by climate disaster.

‘Already this summer, deadly flooding in Kentucky and Missouri, fast-moving wildfires in California and multiple heat waves nationwide are clear examples of how more intense climate-related disasters are happening,’ the group warned.