Amtrak Train Derails From Bridge Onto I-5 Near Olympia, Washington; Multiple Fatalities Reported

An Amtrak train has derailed on an overpass in Washington state, with at least two train cars falling onto the highway below. Authorities say multiple fatalities and injuries have been reported. At this time, all southbound lanes of traffic remain blocked on Interstate 5.

All SB lanes of I-5 blocked near Mounts Road in Pierce County due to derailed train car. Avoid area! pic.twitter.com/SBH7dCc6yg

"Today's tragic incident in Pierce County is a serious and ongoing emergency," Washington Gov. Jay Inslee wrote in a statement. "Trudi and I are holding in our hearts everyone on board, and are praying for the many injured. They are our top priority, and I know first responders are doing everything to ensure everyone has the care they need."

First responders are treating the derailment as a mass casualty incident. Authorities have not yet provided details on injuries.

"Emergency crews are on the scene and the Amtrak Management is responding," an Amtrak spokesperson said in a statement. "Some injuries are reported. Service between Seattle and Portland is suspended for the time being."

Amtrak train 501, which departed shortly before 8 a.m. local time from Tacoma, was part of a new service that launched Monday morning. The train is able to carry up to 250 people, but Amtrak said there were approximately 78 passengers and five crew members on board at the time.

The Cascades service from Seattle to Portland was supposed to be rated for a maximum speed of 79 mph for the section where it derailed in DuPont, according to passenger Chris Karnes.

Karnes, who was on board the train when it derailed, said at least seven cars derailed from the tracks. The emergency doors were not functioning correctly, which forced passengers to kick out train windows to exit. 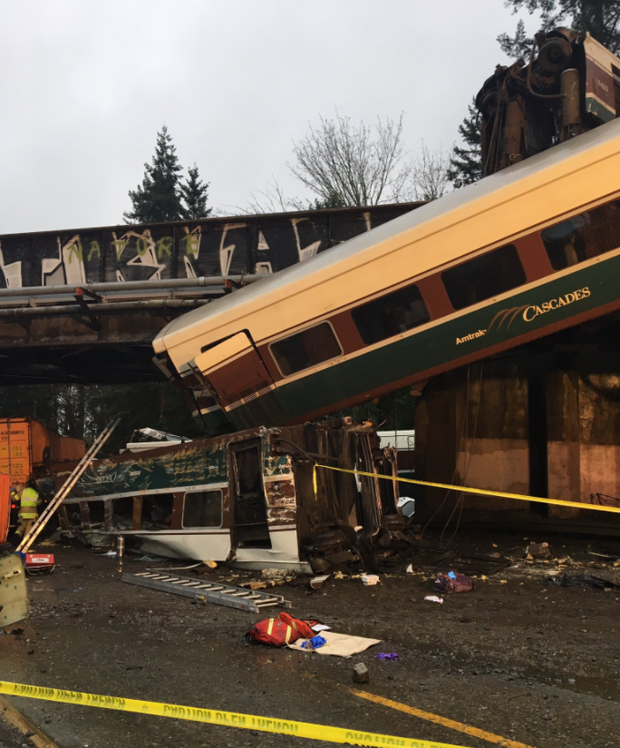 "We had just passed the city of DuPont and it seemed like we were going around a curve," Karnes said. "And all of a sudden, we felt this rocking and creaking noise, and then all of a sudden it felt like we were heading down a hill, and the next thing that we know, we're being slammed into the front of our seats, and the windows are breaking, and then we stop, and there's water that's gushing out of the top of the train and all the lights go out and people are screaming."

"The tracks for this line were supposed to be upgraded to be able to handle higher speeds," he added. "So, I'm not sure what happened at this juncture." CBS News correspondent Kris Van Cleave reports the train tracks themselves are not owned by Amtrak; they're maintained by a freight railroad.

Motorist Greg Mukai, who witnessed the derailment from the highway, described the incident as "really scary stuff."

"We suddenly had to go from our 60 mph down to zero as fast as possible," he said. "We were all avoiding one another to try and avoid a collision there. We saw smoke and the passenger train hanging from the overpass and on the freeway."

A photo taken by a Washington state trooper showed one car of the train smashed upside down on the highway and another hanging off the bridge above it. The cause of the derailment remains under investigation. An NTSB team will be sent from Washington, D.C., to investigate the incident.

A family reunification center has been set up at DuPont City Hall, KIRO-TV reports.

Anyone with questions about friends or family who traveled on the derailed train should call (901) 523-9101.

A spokesperson with St. Joseph's Medical Center says a total of 77 patients are being transported to hospitals in Pierce and Thurston counties. Four of the patients will be treated for severe injuries.

KIRO-TV reports the sheriff's office confirms fatalities among passengers on the train. The death toll has not been released at this time.