It's been a long month of severe weather, particularly in the middle of the country where tornado outbreaks have become a daily occurrence.

If it feels like it's been a long month of severe weather, particularly in the middle of the country where tornado outbreaks have become a daily occurrence, it's because the country, particularly the heartland, has been caught in an unprecedented stretch of tornadic activity lately.

On Monday night, a large tornado struck Dayton, Ohio, causing significant damage to local communities, and several other powerful twisters were reported in Ohio and Indiana. The next night, a destructive tornado ripped through Linwood, Kansas. These are just a few of the massive tornadoes that have touched down recently in the country.

Tuesday will likely set the record for the most consecutive days with reports of at least eight tornadoes, or "tornado days." Tuesday was day 12, eclipsing the old record of 11 that ended on June 7, 1980.

As of Wednesday evening, the National Weather Service’s Storm Prediction Center (NWS SPC) logged 22 preliminary tornado reports on Tuesday. While these reports do not represent confirmed tornadoes, they do suggest that the record for consecutive days on which at least eight tornadoes touched down would be broken once the official totals are in.

That number will likely extended to 13 days as 22 preliminary tornado reports have been reported during Wednesday's severe weather event.

"Based on where and when these preliminary tornadoes were reported, there were likely eight different tornadoes that touched down on Wednesday, adding another day to the record," AccuWeather Meteorologist Brett Rathbun said. 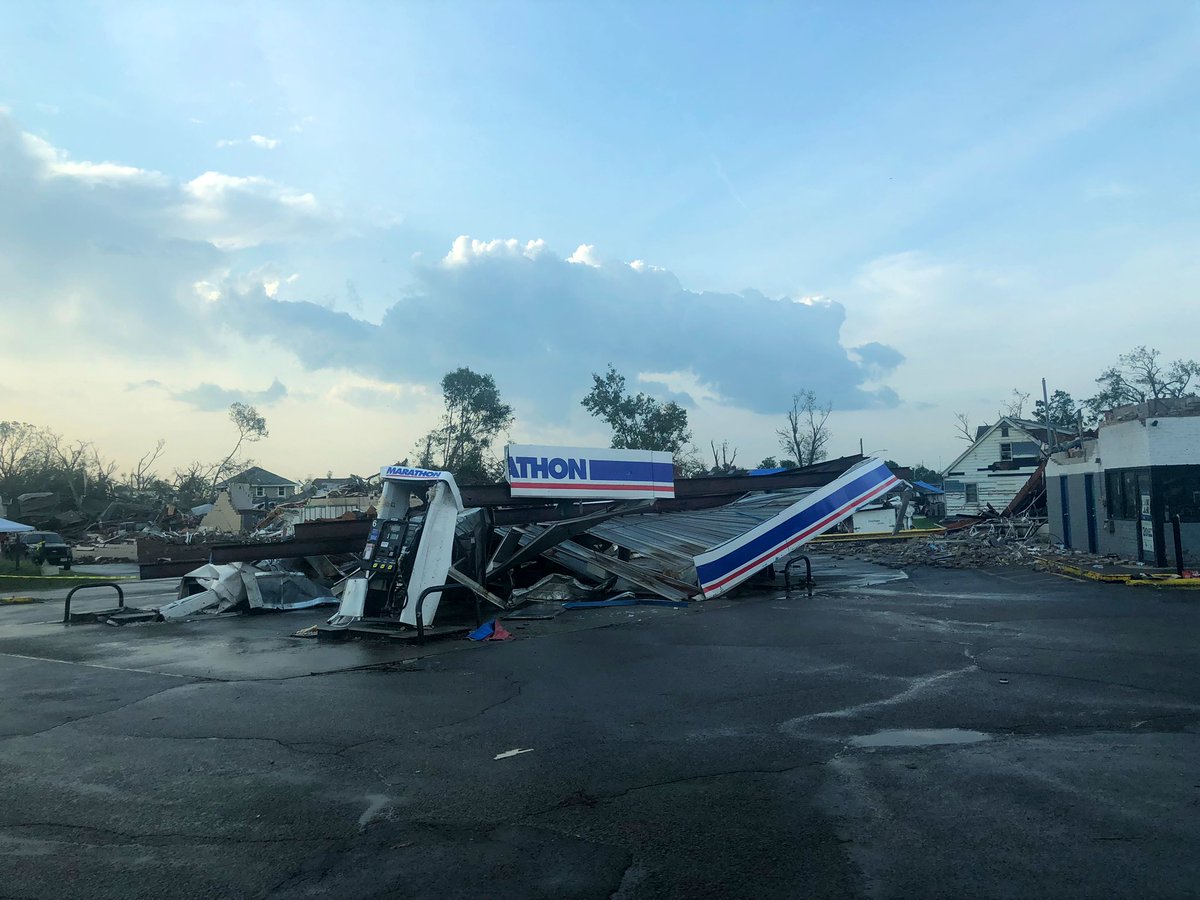 Danny Ivers, a candidate for Hamilton City Council in Ohio, traveled to Dayton on Wednesday, March 29, with Haven Youth Group to help with cleanup efforts and photograph the devastation. Twitter photo/@divers

“The official record uses observed, confirmed tornadoes, and we are still dealing with preliminary tornado counts for the current stretch,” Dr. Patrick Marsh, a warning coordination meteorologist at the SPC, said in an email to AccuWeather.

Marsh told The New York Times that "we are flirting in uncharted territory. Typically, you’d see a break of a day or two in between these long stretches, but we’re just not getting that right now.”

Marsh told AccuWeather he chose eight tornadoes per day because that is the minimum number of tornado local storm reports (LSRs) issued on any given day during this stretch. If the benchmark were set to 10 tornadoes, the 1980 streak would hold.

“If you want to use number of consecutive days with any confirmed tornado, that is 70 straight days, with July 1, 1991, being the last day in that stretch with a tornado,” Marsh said.

Tornado reports have exploded this year after a couple years of low activity. The SPC has reported 935 tornadoes (preliminary) so far this year.

May 2019 is on track to have the most tornado reports of any recorded May, which is typically the most active month in terms of tornado activity.

Before Tuesday, there were 442 tornado reports during May. The official tally has not been confirmed, but there were 19 additional filtered reports on Tuesday, so that would bring the total to 461 for the month, according to AccuWeather Senior Meteorologist Kristina Pydynowski.

“Looking at the data, before this month, May 2015 had the most tornado reports in any May with 414,” Pydynowski said. However, the current number of 461 is preliminary and it could be a little less after the season when the SPC will sort through the data for an actual total.

“Regardless, this May will be one of the top two most active tornado Mays (most likely No. 1) on record,” Pydynowski said.

The NWS reports that 38 people have died in 10 tornadoes in the United States this year, up from 10 fatalities in 2018. Seven of those deaths from this year's tornadoes have occurred in May. The majority of confirmed tornadoes this May are less intense, rated as EF0, EF1 and EF2s on the Enhanced Fujita Scale, but there have been a couple of very powerful twisters.

One of the strongest confirmed tornadoes this year was an EF4 tornado that killed 23 people in Lee County, Alabama, in early March. On Wednesday afternoon, the NWS officially rated the tornado that obliterated Linwood, Kansas, an EF4 storm with top wind speeds of 170 mph. No fatalities were reported in Linwood.

If you have an opportunity to help out the affected areas, please do so. pic.twitter.com/TzYUGYvwtT

Pydynowski added that there may be an increase in the number of tornado reports in recent years due to more people being out in the field and reporting tornadoes. There is a theory discussed among meteorologists that social media use may also play a role in this upward trend in tornado reports.

However, Marsh said that he does not feel comfortable “saying much about any trend owing to social media.”

About a decade ago, some preliminary work found that to approximate the number of observed tornadoes based on LSRs, one should multiply the LSR count by 0.85, Marsh said.

The recent uptick in tornado activity may be linked to a very volatile weather pattern across the U.S., with a large dip in the jet stream bringing unusually cool weather in the Southwest.

“At the same time, high pressure strengthened and was responsible for the record heat in the South,” Pydynowski said. “Storms riding the jet stream kept emerging from the Southwest and onto the Plains, clashing with warm and humid air and sparking the onslaught of the severe weather.”

Is there an end to this turbulent weather pattern in sight? The central U.S. may soon have a break from this severe weather, as Wednesday will be the last day of widespread severe weather across the Plains, Pydynowski said. Much-needed dry weather will span areas from Nebraska to Oklahoma Thursday and Friday.